The Membranes: A Novel (Modern Chinese Literature from Taiwan) 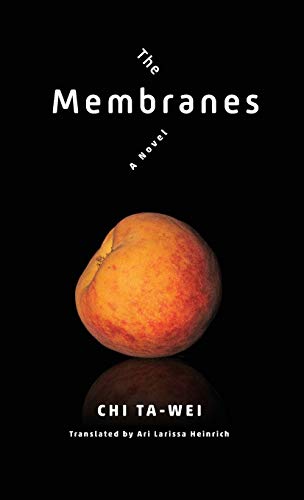 “wonderful and deeply engaging. The Membranes is a marvelous book.”

Unless the author’s a household name, like Haruki Murakami or Elena Ferrante, even a great book is likely to wait years for translation. A good translation is painstaking, probing meaning and idioms, and remains the work of human hands and minds. And there needs to be a will: to choose the book, to take on the work. Chi Ta-Wei’s The Membranes was first published in Taiwan in 1996; it only arrives in English in 2021, a quarter-century later. As a work of science fiction, has its moment then passed?

Shockingly, no. The Membranes feels relevant, even urgent, in spite of its multi-decade linguistic hiatus. Protagonist Momo is a “dermal care technician” in a Taiwanese dome at the bottom of the sea. In her world, nearly all humans live in these domes, engaged in lives of sensual pleasure and elaborate self-care even in the midst of the environmental catastrophe that drove them underwater in the first place.

Momo is even more reclusive than most of her contemporaries. She performs intimate care acts on her clients, but beyond that has little contact with her larger society: “Momo was accustomed to a simple life. She preferred writing letters to talking on the phone. She also didn’t go out much; it was enough to watch the news online. . . . And if she wanted anything, she just ordered it online—no need to go out.” This voluntary isolation reflects her sense of being deeply separate from others even in her most intimate moments: “She knew what between her clients’ faces and her own hands—beyond the seaweed and the carmine masks— lay another membrane that prevented her from ever truly getting close to anyone.”

Much of the novel turns on questions of flesh and skin. One of Momo’s most exclusive services is M-skin, an all-over layer of material as thin as skin cream, creating a layer of protection that simultaneously isolates. That layer, too, is revealing: Momo can go through the used M-skin packages and experience what the wearers did in the hours that passed. This deep voyeurism fulfills Momo’s desires in place of anything particularly sexual.

Flesh and where it comes from are likewise urgent questions. Momo’s birth is described by her estranged mother as emergence from a peach, neither “born from a womb” nor “plucked from a trash heap.” Momo and her mother don’t speak, though her mother is a top executive for a publishing corporation (tellingly and somewhat datedly named MegaHard). The question of her mother is raised mostly by others, notably a journalist client who also gifts Momo with a living puppy: messy, awkward, and less convenient than a robot dog, but unmistakably alive.

Beyond all of this is a frank engagement with issues of gender that made the book cutting-edge for its era and still engaging now. Same-sex intercourse became legal in Taiwan only in 2019, but lesbian sex and relationships are addressed frankly throughout The Membranes. Queerness and transness interweave with exploration of the relationship of the body and the self, and of how far we must be defined by our bodies. Lesbian desire, where it’s frightening, gains its layer of terror not from sexual disgust but from mostly repressed childhood memories to which Momo inevitably returns.

The Membranes is a distinctly Chinese-language novel in its style, showing rather than telling and avoiding deep dives into the protagonist’s psyche. Where a western novelist might spend chapters exploring Momo’s sense of self and the symbolism of her birth story, Chi Ta-Wei provides a leaner narrative, focused on events and encounters and leaving meaning for the reader to explore. The effect is wonderful and deeply engaging. The Membranes is a marvelous book. Its discussion of isolation and the boundaries of self belong very much to the present, and its future feels as urgent as they were on the novel’s first release.