Melville in Love: The Secret Life of Herman Melville and the Muse of Moby-Dick 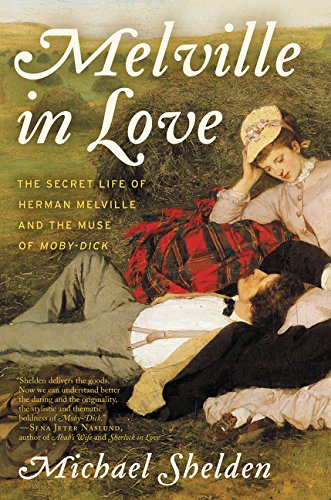 The Oxford Companion to English Literature calls Moby-Dick “the closest approach the U.S. has had to a national prose epic.” For many years, reading Melville’s classic Moby-Dick became a rite of passage for college students. His renowned adventures at sea have precipitated both inspiration and controversy among critics as well as astute students of literature.

However, the novel was not a success when it was first published in 1851 and sold fewer copies than any of Melville’s previous works. The personal journey of both Moby-Dick and its author to their current prominence in world literature (it was voted among the top 100 books in the world) was almost as perilous as the protagonist in his novel.

Michael Shelden chronicles the bittersweet path of a forbidden love affair with a married woman that fueled Melville’s passion and literary inspiration. According to Shelden, “(Melville) has found the inspiration to write the most ambitious American novel of the century, creating in Ahab a character to rank with the best of Shakespeare’s tragic heroes, a wounded soul at war with the world and raging against it at every turn with curses hurled at man, beast and God.”

In this intriguing biography Melville in Love: The Secret Life of Herman Melville and the Muse of Moby Dick Shelden offers a new perspective on the origin of Melville’s iconic novel. According to Shelden, Melville found a kindred spirit in his vivacious neighbor Sarah Ann Morewood, who he described as “a free spirit who enjoys defying convention” and full of “strong passions.”

Melville was well known for his romantic novels with exotic settings and descriptions of morally free cultures, which would have made him attractive to Morewood’s unconventional ideas. Hypnotically drawn to Mrs. Morewood, Melville alluded to her as “not just a delight but ‘Thou Lady of All Delight.’”

The book’s thesis that Morewood was at the heart of Melville’s literary inspiration is based on reexamining Melville’s letters through a new lens. Other biographers of Melville have placed Morewood at the periphery of his life. According to Shelden, “The fact that no one took her seriously is stunning to me but the 19th century is full of amazing women that no one took seriously.”

Surrounding Melville and his wife’s farm in a majestic Massachusetts was an enclave known as The Berkshires. During this period The Berkshires was a hideaway frequented by such literary talents as Henry Wadsworth Longfellow, Nathaniel Hawthorne, and others of note including Supreme Court Justice Oliver Wendell Holmes, Jr. Nathaniel Hawthorne was a close neighbor of both Morewood and Melville, and almost immediately Hawthorne and Melville forged a bond of mutual admiration.

Hawthorne had gained great popularity with his intriguing and controversial book The Scarlett Letter. That book also questioned the social conventions of the time, something that Melville did in all his novels by placing them in exotic cultures free of Western moral restrictions. That may have been a contributing factor to why the two got along from the beginning.

Melville longed for companionship with a kindred spirit, and their bond would endure for many years. Both Morewood and Melville were passionate admirers of Hawthorne’s novel which alluded to the alluring mystery surrounding the theme of The Scarlett Letter. The novel was a foray into what was considered forbidden as it defied the strict code of morality of the times. And on some level, Morewood and Melville played out parts of the Scarlet Letter and its social criticism in their relationship. The trio rebuked the banal mores of the era.

In contrast to the paltry sales of Moby-Dick, Hawthorne’s reputation surged with his success of The Scarlett Letter. But this fact did not dampen Melville’s affinity for his esteemed friend. Unfortunately for Melville, his literary reputation plummeted after the publication of Moby-Dick. The criticism of his novel was both swift and harsh. Even amid the hills surrounding this magical community the book was shunned. In addition, Melville’s domestic life often was tempestuous and fraught with financial woes.

But throughout his trials and tribulations, Melville was both inspired and sustained by the magnetic effervescence of Sarah Morewood. It was as if they absorbed each other’s essence on a cellular level. His imagination thrived upon the mosaic of his own irreverent and tantalizing fantasies of his beloved version of Lady Guinevere. She indeed was his muse as well as the love of his life. Even when a languorous state enveloped Melville, conjuring the vivid image of Sarah’s grace, intellect, and beauty sustained him.

Shelden aptly paints a brilliantly poetic masterpiece in Melville in Love: The Secret Life of Herman Melville and the Muse of Moby-Dick. He artfully constructs the vivid details of Melville’s secret life with Mrs. Morewood during the period when he was writing Moby-Dick. With immeasurable drama he visually escorts the reader into the mindset and emotional life of one of the most renowned literary giants. Without a doubt this biography is capable of captivating generations of readers and writers. Additionally it has the potential to inspire them to pursue their own creative endeavors.