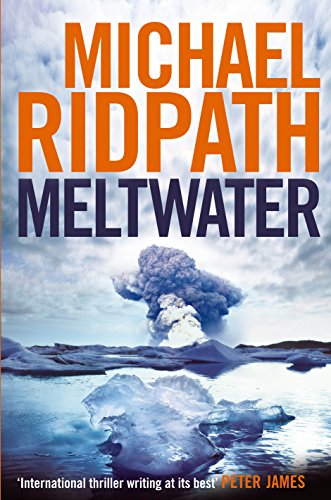 FreeFlow is a group of Internet activists dedicated to freedom of information. They have video evidence of a military atrocity in the Middle East and are preparing to unleash it on the world’s media from their Iceland HQ. On the glacial rim of an erupting volcano, they christen their endeavor Operation Meltwater. Minutes later, one of them is murdered.

“Ásta was impressed. She had seen Hekla erupting before from a great distance, but she had never seen a volcano this close. She had meant to join the thousands of inhabitants of Reykjavík who had flocked up to Fimmvörduháls over the previous three weeks, but had just never got around to it. Although she thought Dúddi was an idiot to drive up on to the glacier without checking the weather, she was very glad she had come.

“As she watched the volcano thrashing and writhing in front of her, she thought of the line in Genesis: ‘In the beginning God created the heavens and the earth.’ Well, that was what she was witnessing, God creating the earth. You could do that here in Iceland. And it was a magnificent sight.

“It was beginning to get dark. The setting sun slipped behind the volcano, blushing pink across the whiteness of the Mýrdalsjökull behind them and stroking the underside of the cloud just above it. A few flakes of snow bit into her cheek.

“She was excited to be working with Freeflow. She liked the look of Erika. It was good to meet another woman who believed in something and had the energy and drive to make a difference. To Ásta’s disappointment, there weren’t many people like that in the Icelandic church.

“She could learn from Erika. She would need all the inspiration she could muster if she was to go ahead with her own plans to shine light into dark corners. The snow thickened ahead of her, horizontal flakes obscuring the volcano. The sun had disappeared. She turned to Dúddi. ‘Do you think we had better get back?’

A blizzard on a glacier was a really bad idea. Especially at night.

Dúddi nodded. ‘Time to go, guys. Where are the others?’ The visibility was deteriorating rapidly. Dieter, Dúddi, Zivah and Ásta were all in a group together, but the other three were out of sight.

“‘I think Nico and Erika are just along there,’ said Dieter, pointing along the rim. “‘Don’t know about Franz.’

“‘Can you get Nico and Erika and tell them to come down?’ said Dúddi. ‘The rest of you, follow me. We’ll keep an eye out for Franz.’

“They could no longer see their jeep below them. Scrambling down the pile of cooled lava was unpleasant: the wind seemed to be blowing harder and colder and the stones slipped underfoot. It was a relief to get back to their vehicle, and to find Franz waiting inside. The jeep they had parked next to was gone, only the two snowmobiles remained, as far as Ásta could see.

“They piled into the car and waited for Dieter and the others. Dúddi switched the engine on: the warmth and the shelter from the wind was a relief. Ásta saw two figures climb on to the snowmobiles and zoom off. The mess of tyre tracks were still visible, but it wouldn’t be long before they would be covered in snow. She hoped Dúddi knew how to operate his GPS.

“They could no longer see the volcano, save for a fuzzy orange glow through the whiteness. But they could hear it.

“‘Come on,’ muttered Dúddi to himself as he sat in the driver’s seat. ‘We can’t hang around much longer. I’m going back to get them. You wait here.’

He climbed out of the jeep and Ásta watched him bend into the wind towards the slope of lava.

“‘I hope they are OK,’ said Zivah, nervously.

“‘You don’t think they could have fallen into the volcano or anything, do you?’

Of course, as in all good thrillers, it soon turns out that they are anything but fine. . . .

The list of people Freeﬂow has antagonized is long: the Chinese government, Israeli military, Italian politicians, even American College Fraternities. Magnus Jonson has a long list of suspects, but he’s getting little help from FreeFlow—for a group dedicated to transparency, they’re a secretive bunch. But they are not the only ones with secrets.

Asta, a newly qualiﬁed priest, has contacted FreeFlow with damning information about the former Bishop of Iceland.

Icelandic detective Magnus Jonson is immediately sent to investigate what exactly happened on the site of the volcano, but is met with suspicion by those members of Freeflow he is trying to help. At one stage, they accuse him of being a CIA member. And if that isn’t enough trouble on Magnus’s plate, along comes his estranged brother Ollie, and the feud that has haunted their family for three generations is about to reignite. . . .

Meltwater is the third book in the Fire and Ice series, and the third appearance of Iceland-born, Boston-raised homicide detective Magnus Jonson, whose first appearance was in Where the Shadows Lie. Magnus was seconded to the Icelandic Police Force for his own protection after he ran afoul of a drug cartel back in Boston, but also has his own reasons for returning to the country of his birth for the first time in nearly two decades to investigate the unsolved murder of his father.

Magnus Jonson is a complex and totally compelling character, fitting perfectly into the bleak and intimidating settings of Mr. Ridpath’s Iceland. Meltwater is a masterful crime novel from a writer confident enough to take on the great Scandavians in their own territory of noir—and beat them.