Melania and Me: The Rise and Fall of My Friendship with the First Lady 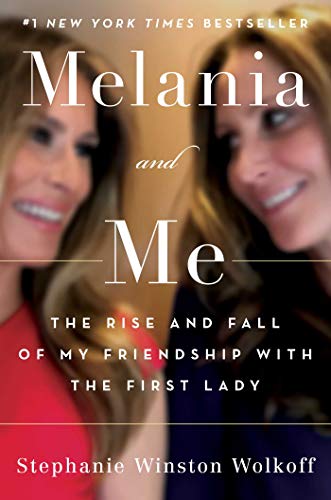 “Apolitical at the time, Wolkoff now acknowledges that ignoring what bad politics does to real people is one of the things that sucked her down the rabbit hole.”

Although the heart of this book is about how Stephanie Winston Wolkoff, a savvy, successful businesswoman at the top of her game gradually takes off her blinders about her friendship with Melania Trump and sees the light, that’s not the only story being told. The author offers a fly-on-the-wall’s view of the top level wheeling and dealing that went into staging the presidential inauguration of Donald J. Trump and the behind-the-scenes East versus West Wing White House power struggles, including a no holds barred rendering of the relationship between First Lady Melania Trump and presidential daughter Ivanka.

The tone of the book is intensely personal as it chronicles the private and public lives of the First Family and those in its inner circle. The author makes no bones about using this book to right a debilitating wrong: being falsely accused of illegally profiting from her association with the First Lady and her own work on the presidential inauguration committee. Wolkoff acknowledges also writing the book as a way of processing the emotional and physical distress she endured during her affiliation with the Trump presidency, especially losing the friendship of Melania, who was one of her dearest friends.

The book is replete with texts, letters, memos, and phone conversations that lay bare not only palace intrigue but the crumbling relationship between The First Lady and Wolkoff, her “unpaid senior adviser and chief strategist.” Some readers will find the sheer number of emoticon-laden communications tedious and excessive, while others will view them as a window into the hearts and minds of both women. At the least, these detailed communications provide evidence that Wolkoff was railroaded out of a job and hung out to dry in the public arena without her close friend Melania lifting a finger to help clear her name.

Wolkoff describes her initial meetings with Melania and how their frequent luncheons were the private avenue that deepened their connection. The relationship goes from personal to professional when Wolkoff volunteers to assist Melania during the 2016 presidential campaign, becomes part of the presidential inauguration committee, and throws herself into helping her friend become what she passionately hoped would be a great First Lady.

Apolitical at the time, Wolkoff now acknowledges that ignoring what bad politics does to real people is one of the things that sucked her down the rabbit hole. The problem is not so much her not noticing inconsistencies in how Melania treats her as a friend and Senior Advisor. Instead, it is how she perhaps thinks she is exempt from the relational red flags she sees and makes excuses for the First Lady’s contradictions describing her education and modeling career, unwillingness to answer questions that make her uncomfortable, coldness and indifference, and need to cut off criticism about herself. As Wolkoff says, Melania “doesn’t do shame.”

An example of Melania’s indifference is her insistence on signing her name as First Lady-Elect when Wolkoff does her research and tells her that using the term is not customary. What Wolkoff, the people-pleaser, initially intensely admires as Melania’s “who cares?” attitude is replaced by a dawning reality that her friend deals with life’s vicissitudes by simply shutting them out. This quality is best exemplified by the First Lady’s refusal to go to bat for Wolkoff in any meaningful professional way even when she knew that her friend was being set up to be knocked down.

Wolkoff describes Melania as seeing herself as an extension of the president, which made it difficult to help her carve out and move forward in her role as First Lady. The author, feeling that it was “my patriotic duty to help our country in any way I could,” describes how she repeatedly urged the First Lady to develop a signature initiative that would redress a national or global problem, but that Melania often seemed more interested in what to wear to events. Then, when Wolkoff was hospitalized and ended up having major back surgeries, she was gradually relieved of her responsibilities. Shortly after, she became the scapegoat for financial irregularities regarding the presidential inaugural committee.

Slammed by the New York Times, Wolkoff was unable to respond due to her nondisclosure agreement. She says in the book what she couldn’t say then, “I didn’t pay anyone a penny. I wasn’t paid $26 million.” To correct the accusation that she’d been fired by the First Couple, she reports begging Melania, “Please clear my name!” but received little support.

Wolkoff references some of the president’s attitudes and actions, such as his germaphobia, but if readers are looking for another tell-all book about him, this isn’t it. She saves her judgments for his daughter Ivanka dubbed “Princess” by Melania, whom Wolkoff believes was a major player in trying to take her down merely because she was close to and supportive of the First Lady.

In the end, although betrayed and disappointed, Wolkoff appears to have put into perspective what happened between her and the First Lady. To her credit, she also sees how her blinkered thinking and stunning lack of insight allowed her to become a victim of systematic indifference and manipulation. Back in the arms of her loving family, she is hard at work at her company, SWW Creative, enjoying participation in projects fostering emotional education. Though Wolkoff paid a heavy price for her naivete, she is the wiser—and makes us wiser—because of her suffering.