Meet Me on the Paisley Roof 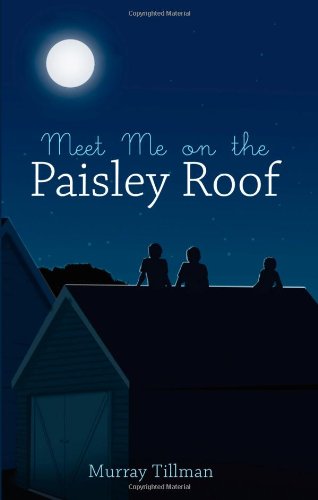 First impressions can be deceiving. The first chapter of Murray Tillman’s Meet Me on the Paisley Roof is the ultimate turn-off. Six solid pages of a manure fight between three teenage boys isn’t exactly an appealing introduction to 1956 Georgia.

However, Tillman’s nostalgic look at small town life is redeemed through the likable trio of Trussell Jones and brothers Cassidy and Ronnie Childs. Thankfully, Tillman doesn’t dabble in sentimentality. Instead, he paints a realistic picture of adolescence in which, more often than not, adults fail to live up to their assigned roles.

When Trussell’s father dies, he is left in the care of his stepmother, Loretta. Saying the two don’t see eye-to-eye is putting it mildly. Loretta feels Trussell is an ungrateful lout whose sole purpose in life is to cause her grief.

Trussell feels adrift with no one to turn to, when Loretta, for all intents and purposes, gives up on him. All she provides are the bare essentials of food, clothing, and shelter, and an occasional note on the kitchen table. Things get so bad that Loretta even brings a gun into the house to “protect” herself from a boy who means her no bodily harm.

The Childs brothers on the other hand are witnessing firsthand the deterioration of their parents’ marriage. With their alcoholic father spending the greater part of the week on the road, they come to realize that the stability in their lives no longer exists. As the eldest, Cassidy is contemplating moving with their father to another town, while Ronnie seeks a way to cope with his feeling of abandonment.

While dealing with serious subject matter in an era that bespeaks Ozzie and Harriet perfection, Tillman infuses the book with an abundance of humor to keep the tone from becoming dark and introspective. They are, still after all, boys and a series of hijinks and pranks ensue from hotwiring Loretta’s car to “borrowing” a gang member’s motorcycle. They even manage to unknowingly kidnap an intoxicated solider, trample to death a panic-stricken monkey and dress in drag to sneak into the hospital.

But being hot-blooded American males, the opposite sex is a frequent topic of discussion. Trussell, after harboring a lifelong crush on Ellen Harmond, finally acts on his feelings when teased into submission by Cassidy and Ronnie. Hilarity ensues.

While late for church, Trussell ends up getting dressed in the backseat of an older girl’s convertible while flying through the streets of downtown Columbus. A sight Ellen just happens to take in from the backseat of her parents’ car.

Another wardrobe malfunction occurs when Trussell is forced to wear a spangled cowboy shirt for his piano playing debut on a local television station—an ensemble that, through a twist of fate, Ellen gets to witness in person.

Another time while on a picnic lunch in a secluded spot, Trussell is just about to make a move when Cassidy appears out of nowhere spoiling the moment. When the two finally start to make an emotional connection, Ellen comes across a nude picture of herself in Trussell’s garage that Ronnie drew for his friend’s birthday. Nothing in Trussell’s courtship of Ellen comes without mishap, but to Ellen’s credit she refuses to give up on him.

The heart and soul of Tillman’s writing comes through when he shows his young characters actively making decisions that will affect the outcome of their lives. They are not passive players in a world controlled by adults. Instead, they are forced to deal with mature issues at a tender age.

With Loretta’s beauty parlor in dire financial straits, Trussell must choose whether or not to leave his embattled stepmother and live with his Aunt Cora in Birmingham. With her mother battling cancer, Ellen must decide whether or not she wants to find strength and support in her relationship with Trussell, whose own mother succumbed to the disease. While Ronnie feeling unwanted in his own home, acts out in a dramatic way in an attempt to bring his family back together.

Through their trials and tribulations, what they come to understand is that regardless of the adults in their lives, they at least have one another. A touching moment occurs between Ronnie and Trussell:

Another scene between Trussell and Ellen confirms the sense of family the boys have created for themselves:

“Trussell, you did witness a miracle.”
“Yes, sure [Cassidy and Ronnie] went to lots of trouble, but where’s the miracle?”
“Their gift to you, Trussell, was love. You laughed with them. Your gift to them was love. There’s the miracle. I don’t have any friends who could or would do anything like that for me.”

Overall, it’s well worth the climb to meet the boys up on the paisley roof.