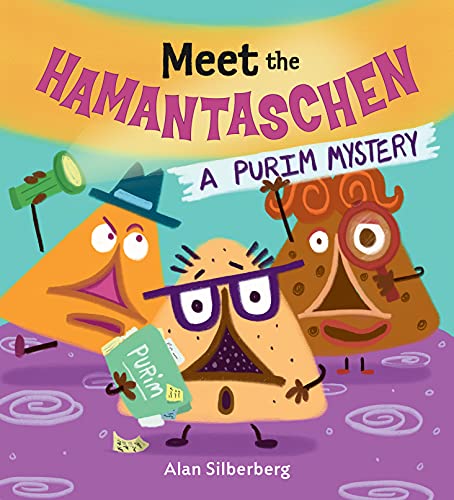 Alan Silberberg has already introduced children to matzah and latkes, using foods to tell the story of Passover and Hanukkah. Meet the Hamantaschen follows the same format, only this time Silberberg has added a detective story into the mix. So instead of telling the Purim story, the book asks the reader to solve the Purim mystery.

The book opens with a lot of humor as the cookies protest that they aren’t pastries, but detectives. When a stranger brings them a case—find the missing megillah—they quickly agree to get to the bottom of things. As soon as they know what a megillah is.

The rest of the book introduces us to the cast of characters from just such a play. Each actor explains their part in the story, from Vashti to Haman to Queen Esther. The hamantaschen realize that the “fact file” the stranger gave them as clues for the case is full of red herrings. Who is the mysterious stranger and why does he give the detectives a package of lies?

These questions are never quite answered, although the stranger points out that his “false facts” led the hamantaschen to the “true story,” a story he encourages the detectives to tell along with the actors they’ve been questioning. So the hamantaschen join in the purimspiel, adding to the zany fun.

The book ends with a surprise reveal of who the stranger is. Unfortunately, that fun fact doesn’t explain the real mystery of why the stranger concocted the false file. And finding that the missing megillah has been used as part of his disguise will strike some readers as horrifying. Should a sacred book be twisted around shoulders and then thrown to the floor?

There’s definitely fun in this book and everyone loves a good mystery, but there is also quite a bit of confusion (the unexplained motives of the stranger) and a bit of sacrilege. How many Jewish families would be comfortable with part of the Torah being thrown onto the floor? For readers unfazed by that, this may be the funny Purim story they’ve been looking for. Others may want to keep searching.