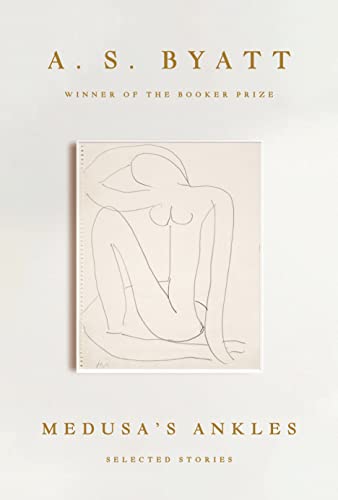 “Medusa’s Ankles opens with a haunting and strangely gentle ghost story (‘A July Ghost’) and ends with a terse contemporary fable about our feckless destruction of the planet (‘Sea Story’). In between are worlds and characters, actual and magical, that the reader will not soon forget.”

A. S. Byatt is best known for her novels, particularly the Booker Prize Winner Possession, but she is at home in many forms: academic nonfiction (Unruly Times), novella (Insects and Angels) and five collections of short stories, not to mention a prose style that often verges on poetry. All 18 short stories in Medusa’s Ankles—most have been chosen from previous collections—span 40 years of the writer’s life.

Byatt is a polymath: her knowledge of everything from Bye-lo Baby dolls to Icelandic folklore is staggering. She can reproduce with pinpoint accuracy an exchange about modern academic politics in a London restaurant ("The Chinese Lobster") or an historical incident involving the poet Robert Browning in the Apennines ("Precipice-Encurled"). She can create pure fairy tales ("Dragons’ Breath," "Cold"), but is probably at her best when she introduces magic and myth into the everyday.

In “The Djinn in the Nightingale’s Eye,” the longest story at almost novella length, a narratologist recently dumped by her philandering husband, must go to a conference in Istanbul. There she manages to release a djinn from an antique glass bottle into her arms. In another story, “A Lamia in the Cevennes,” a painter is saved by his art from the seductive but monstrous Lamia who appears in his swimming pool in France.

Byatt’s concerns are the poet’s concerns: aging and death, the extraordinary and ephemeral beauty of the natural world, the power of art. Her voluptuous descriptions bring to mind the Romantic poets, the Keats of The Eve of Saint Agnes. But there is violence and brutality here,, too, even murder. No world is perfect and as Princess Fiammarosa discovers in “Cold”: “no one has everything they can desire.”

A brilliant borrower from the work of poets from Milton to Robert Burns and painters from Velasquez to Matisse, from myth, fairy tales and the folklore of many cultures, Byatt dismantles and reassembles these influences in a way that is all her own. In so doing, she creates a world in opposition to the often relentlessly shallow one in which most people live. In the title story, a typical Byatt heroine, an aging classicist enraged by the blankness of modern style and the way middle aged women are dismissed, goes on a rampage in a beauty salon. Byatt’s answer to this in another story, “A Stone Woman,” is to imagine a solitary, despondent woman in midlife who slowly turns to stone in exotic layers of opal and agate and “milky quartz.”

Medusa’s Ankles opens with a haunting and strangely gentle ghost story (“A July Ghost”) and ends with a terse contemporary fable about our feckless destruction of the planet (“Sea Story”). In between are worlds and characters, actual and magical, that the reader will not soon forget.