Me & Patsy Kickin' Up Dust: My Friendship with Patsy Cline 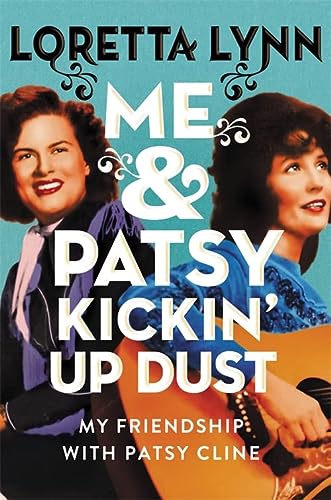 In the opening scene, Loretta Lynn describes gathering at Patsy Cline’s home after her funeral, bringing homemade southern goodies. “All I could think was, this can’t be right. Patsy’s too young to die.” Both were 30 at the time, and Cline had just died at the peak of her career.

The first time Lynn saw Patsy Cline was in 1957 on a small black-and-white TV while living with her husband, Oliver “Doolittle” Lynn and their four small children, working full-time cooking and cleaning for 36 ranch hands on a dairy farm in Washington State. Lynn started singing Cline’s songs shortly thereafter, when Doo bought her a $17 guitar. Doo forced her to sing in local Washington bars on Saturday nights.

Lynn and family eventually moved to Nashville after one of her records charted.

Meanwhile, Patsy Cline was already famous in Nashville. She was in a car accident in June 1961. Lynn dedicated a song to Patsy at Ernest Tubb’s Record Shop immediately after the Saturday Opry show. Patsy’s husband, Charlie Dick, heard the dedication on the radio and invited Lynn to the hospital to meet Cline for the first time.

“Did I know meeting Patsy that day would change my life? No. How could I?” Patsy was born in 1932, same year as Lynn. Like Lynn, she never went to high school.

Cline wanted to sing on the Opry but at 17 was too young. Also, like Lynn, she sang wherever she could, at church socials and carnivals.

Patsy promised to invite Lynn and Doo for dinner when she got out of the hospital, and she did. Patsy cooked all by herself, even after having such terrible injuries. “Seemed to me Patsy went to a lot of effort to make a nice dinner for me and Doo when we weren’t nobody.”

While Cline was still on the mend, because of her scars she hired a professional makeup artist and Lynn visited. “That makeup job was so bad . . . I swear Patsy looked like a poorly made up drag queen.” And Cline taught Lynn how to shave her legs for the first time, which angered the possessive Doo.

Lynn was invited to become a member of the Grand Ole Opry on September 25, 1962, at 30 years old. Patsy Cline had already been a member since 1959 and once caused a scandal when she wore slacks onstage—a time when women only wore dresses.

“. . . when me and Patsy met . . . I had four babies already. But I had never in my life had a climax.” Patsy gave her some sexy nighties and lace panties and let’s just say, that impressed Doo.

The last time Loretta Lynn saw Patsy Cline was February 28, 1963, when Cline woke her up out of bed to listen to Cline’s new record. Patsy invited Loretta to come and sing that weekend, flying in her manager’s small plane. Loretta had to decline because she had another gig in Memphis that weekend.

“My last words to her were, ‘Patsy I sure wish I could come with you.’ She said, ‘It’s all right, Little Gal. Don’t you worry. We’re gonna stick together.’” Patsy’s plane crashed in Camden, Tennessee, killing Cline, her manager, and two other artists.

In August 1964, Lynn gave birth to twin girls, one named Patsy after her best friend, and the other Peggy.

Lynn has written songs that radio stations thought were too “controversial” to play. “To me that was just a four-dollar word for what I’d call honesty . . . I learned that the fans don’t give a shit about ‘controversy,’ they just want it real.” She owed that courage to Patsy Cline, who was naturally ballsy.

In 1972 Lynn won the Country Music Association’s Entertainer of the Year award, as predicted by Patsy years earlier. In 1977, Lynn recorded a tribute album called I Remember Patsy.

With an outstanding Foreword by Dolly Parton, Me & Patsy Kickin’ Up Dust delivers enjoyable short chapters jumping in and out of stories from Loretta Lynn’s heart, written in Loretta’s own, unedited, authentic, rural mountain voice. Patsy Cline helped Lynn get started in Nashville’s music scene. She even groomed Lynn, teaching the then-country bumpkin how to dress for the stage. A lovely, quick read for classic country music fans.