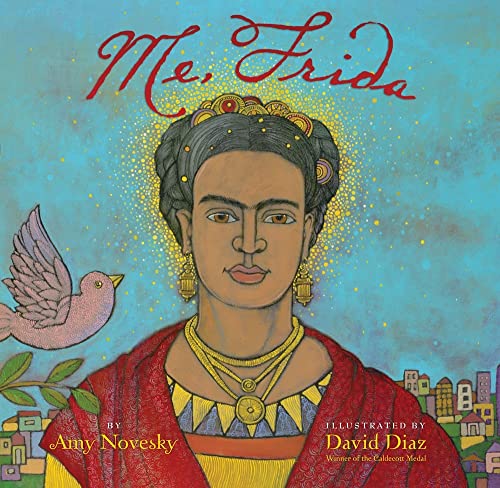 Me, Frida is an exhilarating true story about an amazing artist who changed the way people saw her and inspired many others to not forget their own dreams.

Me, Frida is about Frida Kahlo. She married a great Mexican painter named Diego Rivera. To Diego, his wife was as bright as the stars in the sky, but Frida felt small and unimportant in comparison to him. It was how she saw herself—and the way others had also seen her.

Frida and Diego were both artists, Diego more well-known. Frida was still trying to find herself as an artist and a woman when they moved from Mexico to San Francisco during the 1930s. And though Frida was at first intimidated by the big city, it was there that she found her muse.

Frida discovered the beauty, diversity, and exuberance of America. She found her hidden talents as an artist and was soon working diligently to become better. At parties, Frida would cling to Diego’s arm and it was there, in the public eye, that no one ever saw her. People would ignore her existence. It was at one such party, after Frida found her inner strength, that she was tired of being silent. She began to sing the most inspiring song, and it was her husband who cheered the loudest, believing all along in her abilities, but just waiting for her to express them.

She created a painting called Frieda and Diego Rivera. It was this painting that expressed how the world saw them as a couple. Her husband was painted big while she was painted smaller. But it was not how Frida felt anymore. She knew she was more than this, and she began to put herself first.

This is an inspiring story for young children encouraging them to believe in themselves and never settle for something less than what they truly deserve. Frida found herself in San Francisco, and she will forever be remembered as a woman who changed the art world. She is now one of the most celebrated artists of all time.

Children between the ages of 4–8 will especially enjoy the colorful artwork throughout this 32-page picture book, as well as the meaningful message.