Me and Sister Bobbie: True Tales of the Family Band 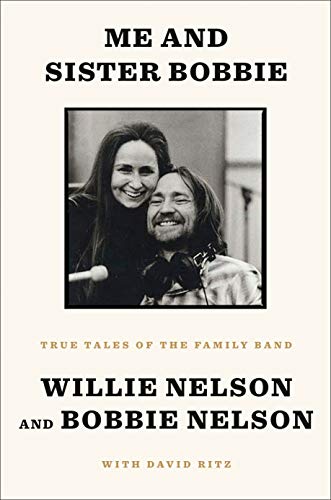 “‘If I was the sky, Bobbie was the earth. She grounded me. Two years older, she also protected me.’”

Willie Hugh Nelson was born in 1933 and unless one has been living under a rock, he is known to be one of the all-time top musicians and songwriters of country music. However, claims Willie, it’s his sister Bobbie, his heroine, whose life story needs to be shared. “If I was the sky, Bobbie was the earth. She grounded me. Two years older, she also protected me.”

Cast aside by their parents when Bobbie was three and Willie was an infant, the two were raised by their paternal grandparents, Alfred (“Daddy,”) and Nancy (“Mama”) Nelson, in Abbott, Texas.

The love of music was nurtured in the Nelson home and in church. After Bobbie attended her first concert at five with “Daddy,” he bought her an old upright piano for $35.

Willie’s gift was a guitar from Sears & Roebuck. Daddy taught him the basic chords. Bobbie noticed Willie had a talent for rhymes. “He could make up metaphors before he even knew the meaning of metaphors.”

Daddy Nelson died from pneumonia at the age of 56, in 1939, leaving Mama with no means to support the family.

Bobbie and Willie lived in constant fear of being taken away by the authorities. The family of three picked cotton, grew a garden, sold eggs, and did whatever necessary to survive. Mama gave piano and signing lessons.

Although two years younger, Willie began to attract girls before Bobbie dared to date boys. The girls seemed to enjoy his playing music on stage at school dances.

At a church revival at 16, Bobbie met the man who would become her first husband, Bud Fletcher. He was 22 and a drinker. “Back then it was simply something that people did.” Bud also helped start a band for Bobbie and Willie.

Though Bobbie’s marriage floundered due to Bud’s alcoholism, she had three sons between 1950 and 1953. Willie, at 18, joined the air force. He was discharged after a medical injury.

At 19, Willie married 16-year-old Martha in Waco. Because they both had no money, Mama Nelson welcomed them both back home to Abbott. Their first daughter, Lana, was born in 1953.

Bobbie and her young sons were living with Mama in Abbott when her in-laws won custody of the three boys. They claimed Bobbie had no way to support the boys by playing piano in honky-tonks.

Bobbie, Mama Nelson, and soon Willie, Martha, and Lana all moved to Fort Worth where they stayed with family. Bobbie went to night school for business courses; Willie became a deejay and briefly taught Bible classes.

Willie was deejaying in Portland, and Bobbie got back her sons in Fort Worth. Bud Fletcher divorced Bobbie, and she soon married Paul Tracy. With the birth of Willie’s third child, a boy, he was forced to be chief breadwinner.

After their move to Nashville, Martha worked while Willie tried to peddle his songs, without much initial success. “One time . . . I lay down in the middle of the street half hoping a car would ride over me.”

Hank Cochran gave him his first break, and Willie’s first songwriting hit, “Hello Walls,” earned him a royalty check of $3000.

Then the hits rolled in. Bobbie’s marriage to Paul fell apart as she took up with a married waiter at a restaurant where she was playing the organ. Willie’s marriage to Martha fell apart when he found Shirley Collie, a singer whom he married in 1963.

Willie and Shirley moved to a farm in Tennessee large enough, he’d hoped, for his entire family.

Willie was caught red-handed when another woman, Connie, had his daughter, Paula, in Houston. He divorced Shirley and married Connie.

At 36, Bobbie married a 24-year-old man, Bud Smith, and her family moved to Willie’s farm. Willie began to record any genre of music he pleased. “For me to be satisfied, it has to be filtered through my own soul.”

In 1970, a fire destroyed Willie’s home, so the family moved back to Texas. Willie gave up whiskey and cigarettes, took to marijuana (as did Bobbie), and was happy in Austin. Bobbie divorced Bud and took up with Jack Fletcher. Unfortunately, that relationship, too, proved disastrous.

In 1979 and 1980, Willie appeared in two movies. He wrote “On the Road Again,” one of his biggest hits. In the mid-eighties, he met his current wife, Annie, while doing a movie, Stagecoach. They later had two sons, Lukas and Micah.

Due to a negligent accountant, Willie lost everything, with the IRS claiming he owed $32 million. He fought back by recording two high-profit albums and has been successful ever since.

Says Willie, “. . . good music never goes out of fashion. Like the sun, it rises every morning.”

The Nelson siblings have had peaks and valleys, especially with the deaths of two of Bobbie’s three sons, and the loss of Willie’s son, Billy. But faith and fierce love of family prevails throughout.

Written in gritty, unapologetic Texas jargon, in short chapters alternating between Willie and Bobbie, Me and Sister Bobbie, a poignant, beautiful, heartfelt co-memoir, delights and astounds.