The Maze (A John Corey Novel) 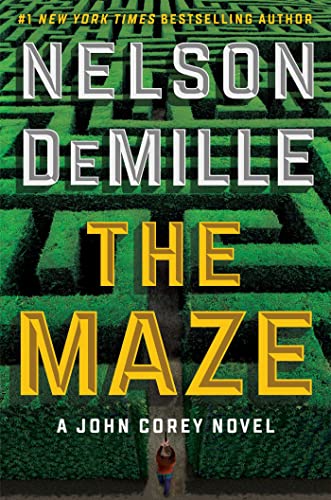 “a high emotional intelligence quotient as well as a cerebral one.”

The title and cover of this novel clearly convey what’s inside: a serpentine plot. The main character describes it best: “If I was watching this on a drone monitor, I’d be looking down on a maze . . . twisting paths with lots of dead ends and Frankensteins along the way; a labyrinth of corruption and deception, ending in a cesspool.”

That’s just the human element. There’s a physical maze, too, connecting the convoluted complexities of the human drama.

The only person who can sort through the layers—and put a stop to the many crimes involved—is John Corey, ex–NYPD Homicide detective, ex–contract agent with the Federal Anti-Terrorist Task Force and the Diplomatic Surveillance Group, ex–professor at John Jay College of Criminal Justice. In this new volume of the bestselling series by Nelson DeMille, Corey is now “NYU—New York Unemployed.”

On top of being jobless, he’s also wife-less and girlfriend-less. Thus, the story opens with him pondering what to do next in life. The available options are so unappealing that he’s even thinking of joining today’s equivalent of the Foreign Legion.

It takes 20 chapters for this thriller to fully set up and change gears, because there seems to be two intertwining plots.

First is a character story: John Corey, after a career of high-stakes, high-stress, top-secret action and danger, finds himself put out to pasture after being a bad-boy good guy for multiple law enforcement agencies—none of which want him back. So readers get to see what somebody who is lifelong-primed for heroism faces when he’s still ready to rumba but has no choices.

This leads him into the story plot, when he unenthusiastically pursues a job opportunity with a private investigation/security firm. Through them he lands both feet into a deadly pile of . . . um, shall we say . . . poo.

The character’s voice carries the story. Whether you like Corey or not, his perspective is sharply presented through writing that is tight, clean, evocative, and provocative. While those who read thrillers are unlikely to be sensitive about profanity, political incorrectness, and sexism now called the “male gaze,” a trigger warning might be needed to advise prospective new readers about those qualities.

Technically, The Maze might be more of a suspense novel than a thriller, focusing on the cat-and-mouse aspect more than action. However, the threat of danger is constant and does eventually erupt into violence. Until then, the narrative technique keeps duplicity front and center. It’s highlighted through dialogue, where almost every line Corey speaks says one thing he’s while thinking another, and shows how the same is true with the people he’s talking to.

This holds even with people he knows and trusts. One of his best friends plus his returning lover, both still active police officers, set him up to be a mole in the security services firm they’re investigating under the table. Corey smells the conspiracy right away but goes with the flow on the assumption he can figure out what they’re up to and why they want him immersed.

Which he does, promptly figuring out what the bad guys are up to also. “This whole place made a psych ward look like a think tank,” he notes. It’s a familiar scenario: “Apparently, I have walked into the perfect shitstorm. Again. Well, I was getting laid, getting paid, and my life was in danger. What more could I ask for?”

Corey is frank about his addiction to danger. “Why do I tempt fate? That’s what Beth wanted to know, and what Dr. Wilkes—the FBI shrink—asked me. Doctor Wilkes concluded that I had a subconscious death wish, which I do not, and he totally missed that I was a danger junkie, addicted to risk and peril.”

Despite this, he approaches danger with a cool temper and an incisive, clinical mind. His only weakness is overconfidence. Readers might figure out where and how the turnabout is going to happen before he does. Then again, the people he’s up against have the same problem, so their clash is inevitable and plausible.

Meanwhile, in the story’s calmer moments, readers get insight into many of the moral challenges and burnout conditions that hamper law enforcement officials and lead to the cesspools Corey is investigating. These give the story a high emotional intelligence quotient as well as a cerebral one.

In sum, this book delivers what it promises, consistent with its predecessors. It’s hard to imagine where the series will go next—but we can rely on the author to keep ’em coming.