Mayflower Lives: Pilgrims in a New World and the Early American Experience 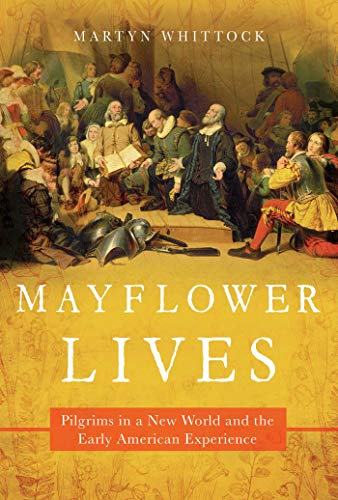 "Each chapter in this book becomes not just a separate life and adventure but a different way to learn about the Pilgrim experience."

A new century brings special anniversaries as occasions for reflection; 2019 had plenty of such benchmarks including for Jamestown, and 2020 will include the Pilgrims' "impact on popular consciousness" while putting their "hardships in sharp perspective."

Author Martyn Whittock in Mayflower Lives seeks to explore "the motives, trials, tribulations, successes, and significance of this myth-making voyage" of the Pilgrims. The author does this through the "dramatic and colorful" "interlocking lives of fourteen of those who were part of these events." "They move the story forward from journey, to settlement, to building a community."

Religion and its politics permeate this story. "Puritan religious beliefs had set them [the Pilgrims] at odds with an increasingly authoritarian Church of England" and the king. Whittock tells the Pilgrims' tale both in terms of the turbulent politics of 1640 England and as immigrant refugees and exiles.

True Puritans sought to change the Church of England, but the Pilgrims wanted separation in every way. The Pilgrims left England for the religious freedom of Holland but where "their sons were facing conscription into the armies of the Protestant Dutch" in Europe's religious wars.

After a "long and hard" voyage on the Mayflower, weather conditions forced the Pilgrims to settle on Cape Code, "a strange and alien environment," instead of the distant "northern parts of the colony of Virginia" or the Hudson River of today's New York. Plymouth settlement began as a poorly planned fluke, "in an area that lacked royal authority" but so did the other efforts from which would come the British Empire.

The Pilgrims and the strangers (non-Pilgrims) in their impromptu home in the New World would face huge challenges. "Desperate hardly begins to describe them." Half of these 130 settlers died in the first winter of 1620–21" from sickness. Of the survivors, half were "children and teenagers."

Fourteen of the settlement's 18 adult women died that first year. Settlers buried children and spouses. Pilgrims like widow and mother Susanna White married from the survivors; with widower Edward Winslow, she started a new family.

Love could develop powerfully, "even if it was not the initial driving force" of necessity and survival and the Pilgrims "stressed the quality of lovemaking as well as its regularity" in achieving an average of eight children per person. That became the basis of the legendary love story of the Mayflower lives of John Alden, Myles Standish, and Priscilla Mullins.

Scandal and tragedy runs through many of these tales. Whittock devotes a chapter to the rebels and scoundrels of Plymouth. Myles Standish led brutal outrages against the Native Americans.

Of a family of four abandoned children, only Richard More survived the first year at Plymouth. Their vengeful father had declared these helpless infants. Richard grew up to serve against the Dutch, the French, and the Native Americans. He lived to witness the Salem Witch trials.

The book appropriately begins with Christopher Jones, the master of the Mayflower who brought the Pilgrims to America. He had no real experience with the dangerous Atlantic. So much went wrong, but Jones persevered even when the Mayflower started to fall apart.

The author describes Jones and his ship as exceptional in a time of seafaring and trade that Whittock writes even made each of Jones' marriages a "sound commercial prospect." Two years later, he died in England and the decrepit Mayflower became scrap lumber.

William Bradford led the Pilgrims. A modern docudrama told the history of the settlement through his history, a document that, like the Pilgrims, had a complicated history.

Whittock gives the lives of these founding fathers and mothers within the story of the Pilgrims of Plymouth as a whole. "Some were men, some were women, one was a little child who did not survive the first winter; one was a Native American." Each chapter in this book becomes not just a separate life and adventure but a different way to learn about the Pilgrim experience.

Although the Puritans believed in the "weakness of women," the author discusses the forgotten but critical female history of Plymouth. "The girls were tougher than anyone had imagined" and lived longer; young women, although few in number, managed to survive "to a remarkable degree."

The characters featured each lived a complicated "Mayflower life." Stephen Hopkins, for example, had survived Bermuda and Jamestown. He knew Pocahantas. At Plymouth as "a stranger among the saints" or not a Pilgrim, he proved a skilled hunter, acted as a negotiator with Native Americans, and owned a rowdy tavern.

Native American Squanto (Tisquantum) became a part of the legend of the Plymouth settlement. His story had the elements of the worst of the European discovery. Kidnapped and enslaved by fur traders, he lived in Spain and England before he found himself back home after his people had died from an epidemic passed to them by the Europeans.

Mary Chilton's Mayflower life serves as an opportunity to explain the legends of Plymouth Rock and Thanksgiving. Whittock often uses these biographies to look for truth about myths. She would become the widow of the wealthiest merchant in Boston and mother of their 10 children.

The entertaining narrative of Mayflower Lives carries the reader through the times as reality and not children's stories. The book has annotation but no illustrations.