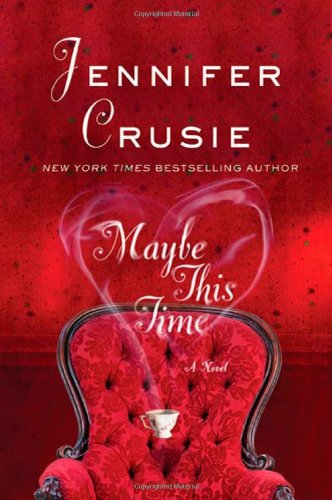 It’s been six years since New York Times bestselling author Crusie’s last solo novel. Readers eager for her witty dialogue and humorous-yet-human stories will be happy to see her return to shelves with this tale that’s part romance, part ghost story, and all Crusie.

Ten years ago, Andie Miller was married to the man of her dreams: sexy, smart, funny lawyer North Archer. It was a whirlwind romance, but it didn’t last. His job as a lawyer took all his time, took him away from her, and after one frustration too many, Andie walked out.

Now, a decade later, she’s happily found the “anti-North,” a sensitive, intelligent writer named Will. She’s convinced she’s ready to move on. But when she returns to drop 10 years’ worth of uncashed alimony checks on North’s desk, life gets complicated again. Suddenly she’s agreeing to postpone her new life and look after North’s young cousins—recently orphaned, in the middle of nowhere, Ohio, for $10,000/month—until he can finish up his current assignment and get down to see them himself.

Andie can use the money, especially since she never spent anything North gave her after the divorce. And it really does sound like the kids need some stability, especially after losing both their parents and their guardian to bizarre accidents, and then wearing out three nannies in a few months. But Andie’s suspicion that things aren’t as simple as they appear is soon proved right.

The kids are traumatized, and rightly so. The housekeeper is sullen, a terrible cook, and keeps warning Andie not to stir things up. And the house itself is a gothic monstrosity relocated from England, complete with towers and a moat, “about as cozy as an abandoned mental hospital.”

Crusie leavens the spookiness with large doses of comic relief, from Andie’s psychic mom, an earthy medium who’s as pragmatic as they come; and North’s brother “Southie” with his current girlfriend Kelly O’Keefe, an ambitious TV reporter determined to build her career with the Archer House story. Before long things aren’t just stirred up, they’re spiraling rapidly toward a dangerous climax that could bring down the entire house—along with everyone inside.

The chills are minor—despite Andie’s initial comment, The Haunting of Hill House this is not. The action romps along between romance, reality, and pure slapstick. As always, the greatest pleasure comes from watching Crusie put her great cast of quirky characters through their paces. This is a story of faith: in human nature, in love, in romance, in connections that cannot be broken.

Crusie fans can rejoice in this original and funny romantic thriller.