Maya Angelou: A Biography of an Award-winning Poet and Civil Rights Activist 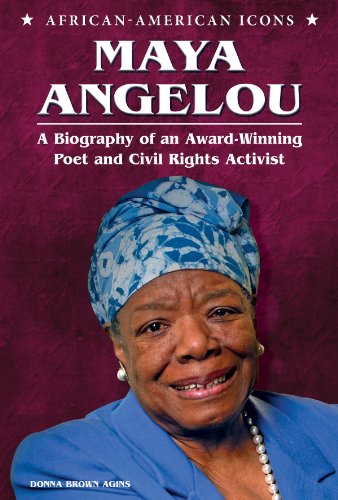 There are few contemporary American writers and activists who have become literary icons. Maya Angelou (born Marguerite Ann Johnson) is that rare combination of talent and integrity and internationally beloved.

Marguerite was born in Missouri in 1928 during a time when African Americans were segregated and barred from having the same rights as white Americans. She was known as “Mya sister” by her older brother, which ultimately evolved into the name Maya.

Her parents divorced when she was three. Unable to care for their children, the parents placed Maya and her brother Bailey on a train to Stamps, Arkansas, to be raised by their grandmother. Maya’s childhood was very difficult living in the Deep South. She witnessed the torment of black men by the Ku Klux Klan, and the memories of these incidents along with the concomitant fear and anger she felt stayed with her forever.

After years of not seeing her mother, Marguerite moved in with mom and her new boyfriend. When she was just eight years old the boyfriend molested her, causing her untold physical and emotional pain. Under the threat of her brother getting killed if she told anyone, she remained silent. Her pain was exhibited by an unwillingness to eat. Marguerite’s mother had an inkling of what had taken place and immediately took her to the hospital.

The police were called and she testified at the trial, but the pedophile received only one year or so for this brutal crime. While he was given some time to settle his affairs, he was murdered. Marguerite felt guilty for his death, and she feared “that if she spoke, her words would cause harm.” From that moment on she chose not to speak to anyone but her brother. And she did not speak for over five years.

Lo and behold, she met a very elegant, genteel, and well-read woman who became Marguerite’s mentor and friend. From literature to poetry with delightful conversations in between, Marguerite came alive again. This lovely woman read to her and encouraged reciting poetry aloud in order to cultivate her voice. And over the ensuing months she gained the confidence to write her own poems. This dramatically changed her outlook on life.

But the abruptness of her life continued. She was once again uprooted by her mom and new stepfather. Now in a strange city, she felt a bit lost and began losing interest in school. At the age of 17, she had a brief rendezvous with a boy in the neighborhood and found out she was pregnant. Her son Clyde was born and she wandered from job to job in order to support him.

But her life was just beginning to flourish. Starting as a cocktail waitress, she began performing on stage and was given voice and dance coaches. After she signed her first contract, it was then that she began calling herself Maya to add a dramatic flair to her stage presence. In the midst of her budding career, she began to compose music from her poems—a practice that became an integral part of her life to this day.

As part of her work she traveled to Europe and Africa. Along her journey she was given a part in the famous play “Porgy and Bess.” But she was pained by the fact that she couldn’t take her son Clyde with her. He suffered tremendously in his mother’s absence. She returned, but it was difficult for Clyde to flourish from then on.

Her acclaim and talent brought her accolades and attention from civil rights activists, and she was quite eager to join the cause of freedom for African Americans. She immersed herself in the movement led by Dr. Martin Luther King, Jr. During this tumultuous time, riots exploded in American cities.

In the midst of this chaos, Maya, her husband at the time, and Clyde were visiting Ghana and other African countries where “there was no discrimination based on skin color.” Involved with a community of like-minded people, Maya finally felt comfortable and accepted a job teaching drama and dance at the University of Ghana. But she was torn and felt the pull of the American civil rights movement.

Her desire to return and help came to fruition when she met and was offered a job working with Malcolm X. But Malcolm X was assassinated in short order, and soon Maya decided to curb her political activism.

She threw herself into various jobs, but her heart was reborn through poetry and writing plays. Her career was in full swing. She wrote and directed a series on television and became the first African American woman to write a successful Hollywood screenplay. But one of her greatest achievements came at the age of 42 when her book I Know Why the Caged Bird Sings became the first by an African American woman to make the nonfiction bestseller list.

Maya’s fame and popularity continued to rise. As a result of her magnificent work she was asked to read her poem “On the Pulse of the Morning”at Bill Clinton’s inauguration in 1993. How could it get any better than that? But her creative life continues as she helps others to find their voice as well.

Author Agins has done an excellent job in both chronicling and marking the milestones in the life of Maya Angelou. Though this biography is geared to a younger audience in order to educate them, it is absolutely worth reading for adults as well.

Few of us know the intricate pieces of a person’s life. But as we grow and evolve it becomes a wonderful journey to explore what transpires in a life so full of talent and grace. This book delves into a life worth knowing and appreciating.

Laura Schultz’s poetry has been published in such venues as Forth magazine, Writers News Weekly, Abandoned Towers magazine, and Empowerment4women.com. She was the only U.S. poet asked to contribute her work to the international anthology Sudden Thunder. Her personal essay “A Poet’s Journey” was published in Coal Hill Review. Her first poetry book, Arise and Shine: Laments of the Darkness, Songs of the Light, was released by Silver Bow Publishing in 2011.