Maya after War: Conflict, Power, and Politics in Guatemala 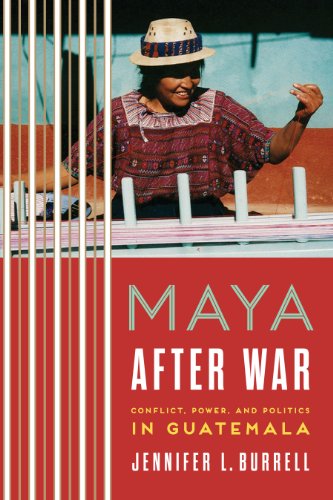 Maya Guatemala is a complex and dangerous place, one where the political violence of civil war has been replaced by spiraling post-war social violence.

Numerous examples demonstrate that there is no clean break between times of war and its aftermath (e.g., Iraq). Jennifer Burrell’s Maya After War explores this transition after 36 years of civil war (1960–1996) during which the indigenous population was brutally targeted as cold-war insurgents.

By way of review, a CIA-backed coup toppled the modestly liberal, progressive regime of Jacobo Árbenz in 1954 which sought reforms that threatened companies, such as United Fruit; the combination of economic marginalization and racism catalyzed a civil war starting in 1960; General Efraín Ríos Montt was installed as dictatorial president after a coup in 1982 and undertook a scorched earth campaign against the Maya until his ouster in 1983; Peace Accords were signed in 1996 that ended the war, recognized the Maya, but provided no mechanism for inclusion; an estimated 200–250,000 Maya were killed or disappeared.

Ms. Burrell notes that the post-war, democratic transition in Guatemala has not ushered in peace, stability, or prosperity.

In addition to high levels of violence, it is one of the poorest countries in the western hemisphere and has one of the widest gaps between rich and poor. There the rich take care of themselves—flying to Houston for healthcare, hiring private security for protection, and firing up generators when the power grid goes down.

Everyone else is pretty much on his or her own.

This is the backdrop and entry point into Burrell’s excellent exploration of how a legacy of violence has shaped the Maya of Todos Santos Cuchumatán, a town in the far western highlands of Guatemala. During the civil war, Todos Santos was under the military gaze, and its presence catalyzed long-standing and more recent internal conflicts—neighbor ratting out neighbor as subversives when conflict really centered on land, water, debt, or personal grudge.

The citizens of Todos Santos were enlisted as agents of the government through the creation of civil patrols whose summary justice was often arbitrary—violence became part of the fabric of Todos Santos.

Ms. Burrell describes, for example, how maps and mapmaking entered into this weave. During the civil war, maps were largely under the control of the military— they are ways to render people and communities visible. When she undertook a mapping project as part of her early anthropological work, the townsfolk was concerned and divided.

Did the civil patrol approve? Was this way to be too easily found and identified by the authorities? Did her maps, in other words, expose them to potential harm?

Another form of mapping is through memory. As the old maxim goes, histories are written by the victors. Clearly that would not be the Maya. As Ms. Burrell observes, the vulnerable are often silenced, everyday cultural practices are lost.

Indeed, she astutely connects the loss of Maya religion during the civil war with an overall erosion of a sense of environment and place, for they are key elements of worship. She further notes that Catholic missionaries and evangelicals also did their part to undermine Mayan religion.

Evangelicals, especially, have made amazing inroads into communities leading some to argue that Catholics, let alone traditional practitioners, are in the far minority. The result is a highly fractured sense of history, memory, and place. To this we can add a faltering system of local governance that had once relied on a hierarchy of Catholic elders for leadership.

As Ms. Burrell states, migration has complicated the dynamics in Mayan communities by a reshuffling of class lines and power.

Perhaps her two most fascinating chapters focus on the vexing problems of lynching and gangs. The former is commonly portrayed as a form of popular social justice in response to endemic threat and insecurity that is a byproduct of a failing state. Some argue that the highest frequencies of lynching occur in areas hardest hit by civil war violence (and reproduce that violence).

Ms. Burrell, however, takes another tack that I think is on the mark; namely that the Maya people live in a resonating chamber of rumor and fear—savaged by civil war and effectively abandoned by the post-war state to fend for themselves.

It could be further argued that they suffer from a form of collective post-traumatic stress further compounded by living in an endemic state of risk and danger. Thus, they are poised to preemptively strike and overreact when threat looms.

It is especially important to vigorously underscore that one of the deepest held Mayan values is balance, which pervades everything from their cosmology to how you take a sweat bath or eat your dinner. Lynching is archly un-Maya. Its practice underscores how damaged people and communities have become.

Gangs play into these fears and, as Ms. Burrell quite rightly contends, serve as a convenient label for non-conformist youth challenging age-graded hierarchies of social control.

They also form a convenient target for state-sanctioned and local violence. Ominously, community-based security patrols have arisen anew in post-war Maya communities and are reproducing the mano dura (iron fist) posture of the state. Again, we see an example of life out of balance, and the violence that flows in its wake.

In sum, Jennifer Burrell’s Maya After War is important reading for anyone interested in the contemporary Mayan of Guatemala and how they cope (and sometimes not) with a legacy of civil war coupled with a future shaped by a failing state.

This is the story of an incredibly stoic, resilient people who must confront fear and face violence on a daily basis without end in sight.