Maverick: A Biography of Thomas Sowell 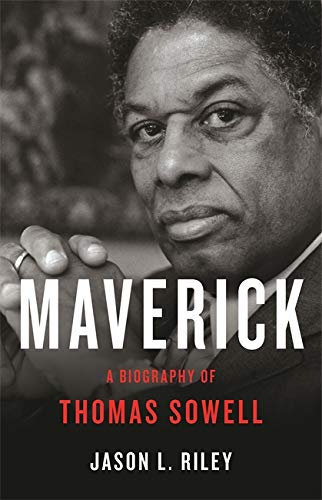 “Riley’s book is both an incisive examination of Sowell’s ideas and a tribute to a man of courage, brilliant intellect, fierce independence, and scholarly integrity.”

The dictionary meaning of “maverick” is an unorthodox or independent minded person. It is the perfect title for Jason Riley’s splendid intellectual biography of Thomas Sowell.

Sowell, who turned 90 years old last June, is the author of more than 30 books about economics, culture, race, and public policy. He has traveled the intellectual odyssey from Marxism/socialism to conservatism, but it would be wrong to call Sowell an ideologue. He is above all an empiricist who tests ideas and theories and conventional wisdom by subjecting them to rigorous examination using facts, data, and experience.

Riley, a senior fellow at the Manhattan Institute who writes for the Wall Street Journal and appears regularly on Fox News, is an unabashed admirer of Sowell. Though subtitled as a biography, Riley’s book, as he acknowledges, is an intellectual biography—“a treatment of Sowell’s ideas.” Sowell’s life and experiences are dealt with in relation to his ideas as set forth in his books, syndicated columns, scholarly journal articles, and personal letters.

Indeed, Riley shows how Sowell’s early life experiences—growing up Black and poor in rural North Carolina in the 1930s, orphaned at a young age and raised by his great aunt, dropping out of high school and living in a Bronx shelter for homeless boys—shaped his scholarly work. “I have lived through experiences,” Sowell wrote, “which [most intellectuals] can only theorize about.”

One of the experiences that Sowell believes set him on the path to success was his two years of service in the U.S. Marine Corps during the Korean War. With the benefit of the G.I. Bill and his own brilliance, Sowell studied at Harvard, obtained a Masters Degree at Columbia University, and a PhD at the University of Chicago.

At Chicago, Sowell studied economics under Milton Friedman and George Stigler, both future Nobel Prize winners who became Sowell’s intellectual mentors. Not that Sowell blindly followed Friedman’s and Stigler’s conservative, free market ideas—Thomas Sowell did not blindly follow anyone. It was their intellectual approach that appealed to Sowell; in his words, their “integrity, analytical rigor, respect for evidence—and skepticism toward the fashions and enthusiasms that come and go.”

Sowell also took a course at Chicago taught by Friedrich Hayek, the author of The Road to Serfdom, a brilliant warning in 1944 about the dangers of socialism.

Riley devotes a chapter in the book to Sowell’s experience in the 1960s and 1970s as a professor at Douglass College at Rutger’s University, Howard University, Cornell, Brandeis, Amherst, and UCLA. Sowell became disillusioned with what was happening in academia. “Sowell’s worst fears were being realized,” Riley writes. Colleges were accommodating student preferences for courses. Professors were being pressured to pass failing students and artificially inflate grades. Racial double standards for admission were actually hurting Blacks.

In 1980, Sowell left academia to join the Hoover Institution on the campus of Stanford University. He has been there ever since—researching and writing on economics, race, culture, and public policy. Riley does a commendable job of concisely examining Sowell’s ideas as set forth in his most important books: Knowledge and Decisions, Ethnic America, Civil Rights: Rhetoric or Reality?, The Economics and Politics of Race: An International Perspective, Preferential Policies, A Conflict of Visions, The Vision of the Anointed, The Quest for Cosmic Justice, and a trilogy of books on culture—Race and Culture, Migrations and Cultures, and Conquests and Cultures.

In each of these books, and in all of his writings, Sowell manifests his unyielding commitment to empiricism, even when his conclusions outrage so-called Black leaders who believe that Blacks must speak with one voice—a liberal, progressive voice.

Sowell refused to accept the assumption that economic disparities between races were due solely or even mostly to discrimination. Instead, his global research demonstrated, according to Riley, that “cultural values and human capital—skills, work habits, saving propensities, attitudes toward education and entrepreneurship . . . are the more dominating factors in explaining disparities.”

“[D]ifferent peoples,” Sowell wrote, “have lived in different cultural universes, rooted in different histories, evolved from different imperatives.” Government programs and social engineering cannot change those facts. Sowell does not believe that human beings of any race are perfectible. Sowell’s global investigations of empirical data show, Riley writes, that “third parties are largely incapable of ‘fixing’ the cultural differences that lead to unequal outcomes. What matters most is a group’s self-development, to which there are no shortcuts.”

Sowell’s decades of empirical study led him to oppose affirmative action for Blacks and any kind of racial preferences, to oppose government programs that de-incentivize individual black advancement and entrepreneurship, to oppose the current policy advocacy of Black Lives Matter, to oppose calls for reparations from white Americans because of slavery, and to oppose the fashionable move for “equity” instead of legal equality.

For this intellectual heresy, Sowell has been the target of liberal critics or sometimes just ignored by the mainstream media. Riley notes that since 2001, the New York Times, which once described Sowell as “probably America’s most distinguished black social scientist,” has not reviewed any of Sowell’s 18 books published since then.

Sowell is, of course, not the only Black conservative to question liberal orthodoxy. Riley discusses some of Sowell’s forbearers, such as George Schuyler and E. Franklin Frazier, his contemporaries like Walter Williams and Shelby Steele, and younger Black conservatives like Glenn Loury and Stephen Carter—and, one could add, Jason Riley.

Riley’s book is both an incisive examination of Sowell’s ideas and a tribute to a man of courage, brilliant intellect, fierce independence, and scholarly integrity. Sowell’s scholarship, Riley concludes, “will have to be studied and grappled with long after he is gone.”