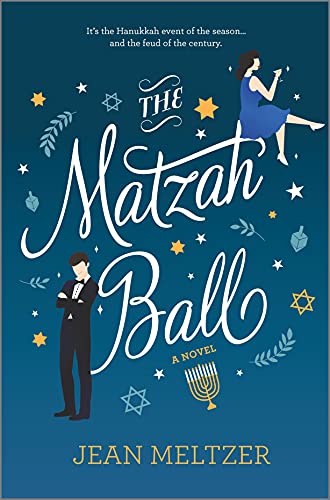 “romantic novels exist not just to sustain a fantasy, but also to help people learn how to love and celebrate it.”

The romance industry has been a leader in inventing subgenres to successfully connect authors and readers who have specific interests and tastes. The industry also has been reorganizing itself around diversity to offer stories that resonate with a broader range of readers by embracing different cultures, ethnicities, and sexual identities.

Matzah Ball approaches romance from a wide view and a narrow focus simultaneously. Up close, it’s centered around Judaism and chronic illness. From above, it’s about the universality of love. Melded together they create a story accessible to readers across categories.

In structure, the novel is a “rom-com”: romantic comedy. Many absurd and sometimes slapstick things happen among the characters—especially the heroine and hero—that bring laughs (or groans).

The primary romance trope is “second chance”: Rachel Rubenstein-Goldblatt and Jacob Greenberg met at age 12 at a Jewish summer camp and had a teasing yet special relationship that haunted both into their adulthood. When they unexpectedly meet again 18 years later in New York City, under strained circumstances, they have an opportunity to resolve their misunderstandings and build upon that adolescent first love.

Instead, they smack straight into each other’s differences and just about everything goes wrong.

As a subgenre, this story can be labeled “holiday romance” because it is centered around Christmas and the Jewish celebratory season of Hanukkah. And here is where the plot conflict lies.

Rachel was raised in an Orthodox Jewish household. Her father is a renowned rabbi and her mother a leading physician specializing in reproductive issues. They practice strict tradition in their home and society; they do not allow any observation of other religions’ practices, which means they have banned Christmas from Rachel’s life.

But Rachel secretly loves the bright, excessive merriment of the Christmas season, and in secret rebellion created a lucrative career writing Christmas romances under a pseudonym. She hides this not just from her family but also from her friends—and Jacob—at the same time hiding her deeper secret: She is chronically ill and became a writer because she can’t hold a full-time job outside her apartment.

Part of her shame about her illness is its name: chronic fatigue syndrome. So many people in both the medical and social communities think the disease is psychosomatic and don’t take it seriously. Yet it massively handicaps Rachel’s life.

She hates being defined by her illness and refuses to give anyone a chance to do so, going to extraordinary lengths to conceal her physical, mental, and emotional self from the world. More than her illness, she is impaired by a lifelong pressure of “should”-ness, believing she should be this or that and knowing in her heart she really isn’t. The conflict tears her apart inside and prevents her from being her authentic self. Misunderstandings and troubles arise from her continuous deceit.

Jacob, meanwhile, was an abandoned child, and this drives him to both career success and relationship failure. He, too, fights against self-authenticity, so that when up against Rachel, they interact in a constant push-pull of misunderstanding that cancels their intuitive understanding of and attraction to each other. They want and try and fail, over and over again.

Only their relationships with other people—for Rachel, her best friend Toby, and for Jacob, his grandmother—are honest enough for enlightenment to break through and steer the lovers toward each other. They are too broken to do it by themselves.

Thus the deeper exploration of love in this love story: man/woman, parent/child, friend/friend, partner/partner. We are treated to multiple ways that people can help or hinder each other, with love tying them together to overcome every problem—including how to manage a silent illness and build a fulfilling life.

All this is carried along by light, clear prose, making Matzah Ball readable and entertaining even while it examines profound questions many people grapple with during their lives.

The story’s romance turns on the concept of bashert. Jacob’s best friend and business partner asks:

“You know what bashert is?”

“How very modern of you. . . . Bashert literally means destiny.”

“Isn’t that the same thing?”

“Not exactly. Soul mate . . . it’s a movie concept. It’s the idea that you fall in love with someone, and off you go, living happily ever after. But in Judaism, that’s not the point of finding your bashert.”

“Your other half exists to make you better. She exists to complete something you lack, and vice versa. You challenge each other, like chavruta, two blades which sharpen each other. But that’s different than love, Jacob. In some ways, it’s more powerful. Because only your bashert, your other half, can fill up what you lack . . . and help you fulfill your destiny.”

Oy. Maybe more marriages would last if both parties understood this idea.

But romantic novels exist not just to sustain a fantasy, but also to help people learn how to love, and celebrate it.

The result is The Matzah Ball, a holiday second-chance romantic comedy with literary underpinnings told by diverse, often ignored, voices. Something for almost everyone!