Mattie and the Machine 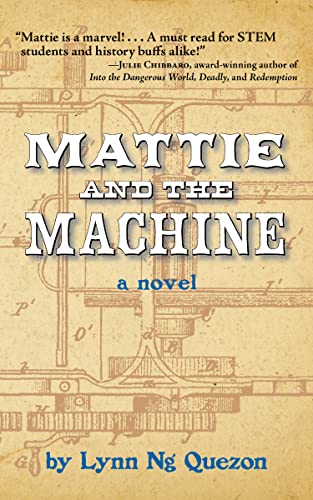 Margaret E. Knight is certainly a worthy subject for a book. She came up with her first invention at age 12, a device to protect mill workers from being hurt by the mechanical looms they worked on. Her first patent, granted in 1870, was for “improvement in paper-feeding machines,” basically a machine to produce flat-bottomed paper bags mechanically, rather than having them folded by hand. She went on to invent other devices, patenting at least 27 of them, though she may have made others without that protection.

Lynn Ng Quezon’s book, Mattie and the Machine: A Novel, is very loosely inspired by Margaret Knight. Quezon skims over the invention process, focusing instead on women’s rights. She makes the invention of the paper-bag machine part of an effort by Mattie to force the bag company to pay women the same wages as men, something that continues to be a problem to this day.

As one of the male characters explains to Mattie, the contest is about much more than an invention:

“‘Mattie, you’ve been so deep in the cogs that you may have lost sight of this, but you are attempting to overthrow a deeply entrenched belief. The belief that men are better with machines. The world won’t change its mind unless you beat Frank, and beat him by a decisive margin. Which means you must do everything to increase that margin, no matter what.’

He’s right. I’ve been too preoccupied with finishing my machine to think about it, but true victory will require more than a higher bag count.”

So it’s a battle to prove the worth of women and their capabilities, not to contrive a clever invention. And that is the tone of the entire book. The problem is that this imposes a contemporary view on historical characters, warping the actual history into a propaganda tool. If this had been complete fiction, with no reference to the actual Margaret Knight, it would be easier to accept this historic relativism. But when referring to an actual person during a particular period, the bar is higher, and the writer needs to be true to the period and the person being invoked.

As it is, the story isn’t one about Margaret Knight, nor about the challenges of invention at the beginnings of the industrial era. Instead it’s about how women have had to fight to be taken seriously. That’s an important subject, but when forced onto a specific historical period, there’s a responsibility to be historically accurate.

Quezon writes well and does a good job of evoking the post-Civil War era. She presents the systemic issues of sexism well, although she makes her characters all too aware of it when at the time, it would simply be accepted as the norm. She’s less strong at creating a compelling character. Mattie feels a bit flat, more like a vehicle to fight for women’s rights than a problem-solving inventor obsessed with finding mechanical solutions to problems in daily life.

The other issue in the book is that the narrative builds to one dramatic climax in the competition to build the best bag-folding machine only to pivot to another, the fight to claim a patent on this invention. The overall effect is a book with many dips rather than a build to a satisfying end. The addition of love interests who both distract and help Mattie feel like something thrown in as a sop to contemporary readers rather than something integral to Mattie’s experience and character.

Overall, the book feels like a missed opportunity. It’s a mission in search of a story rather than simply good storytelling. But if it leads readers to look for more information about the actual Margaret Knight, it will have served a useful purpose. That’s a history still waiting to be told.