Matters of Vital Interest: A Forty-Year Friendship with Leonard Cohen 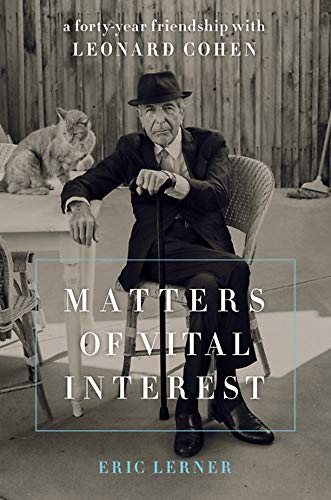 Matters of Vital Interest is not your typical pop star bio. You’d be hard pressed to think of another biography of a major music star from the 1960s where the star attraction is an old man who sits around in his underwear sucking on popsicles with another “alter cocker” (Yiddish for old person) while throwing out wisps of beatnik conversation like: “I’m all ears, bro.”

If that description sounds like a delightful read to you, then welcome to this memoir of sorts, one in which screenwriter and author Eric Lerner details his long friendship with that great poet/songwriter/singer from Canada, Mr. Leonard Cohen.

In fact, this weird hybrid of memoir/biography is wonderful, and one suspects it’s exactly the kind of retelling of the Leonard Cohen myth that the poet would have approved of without hesitation.

It’s eccentric for sure but then again, Lerner and Cohen met while studying with their guru, Zen master Joshu Sasaki Roshi. It was April 1977 when Lerner was sitting in meditation at Saint Joseph’s Abbey in Spencer, Massachusetts, when he sensed someone sitting next to him:

“I could see his hands make sharp, sweeping movements as he snapped the hem of his robe over his knees and tucked it under his feet, turning himself into an impressive black pyramid. I lifted my gaze surreptitiously to glimpse his face.

It was Leonard Cohen.

Later, the two have a moment over the sneaking of cigarettes, and recognize each other’s kindred spirit.

It’s only a very short leap before these two are sharing a house in Los Angeles and drinking themselves silly at old Mayflower Hotel in New York City. You’ve got to love this type of bio as it describes the most mundane but very human day to day life of a heralded songwriter like Cohen.

Like the times Cohen entertained his sister in his Mayflower hotel room. We are told Cohen adored his sister Esther but, you know, tolerated her, too. Just before she arrives, Lerner and Cohen make a beeline for a nearby supermarket.

“We’d race back to Gristedes and collect the fixings for an elegant paper-plated spread of choice hors d’oeuvres, kosher items and rare treats from dusty jars hidden on the market’s highest shelves.”

They are, at their essence, two good Jewish boys.

Over the years, the two talk about everything imaginable—women, family, Cohen’s struggle with his record label (It’s hard to remember now but, before his well-deserved comeback toward the end of his life, Leonard Cohen was ice cold in this country.), careers, and toward the end, the meaning of life and death.

There are many wonderful anecdotes here such as the time Cohen presents his latest recording to Sony honcho Walter Yetnikoff. “Leonard, we know you’re great but we don’t know if you’re any good,” Yetnikoff tells him.

And with those words, Yetnikoff sends Cohen’s LP off to international sales, refusing to release it in America.

“The unspoken punch line,” Lerner writes, “is that Walter Yetnikoff passed on the album that includes such iconic Leonard Cohen songs as ‘Dance Me to the End of Love,’ ‘If It Be Your Will,’ and Leonard’s most covered song of all, the virtual anthem of his career, ‘Hallelujah.’”

But, Lerner tells us, Cohen thought Yetnikoff was right—there was no surefire “hit” on that album. Cohen tried doubly hard on the next record and wrote a handful of great songs but again, they went nowhere. At that point, Cohen gave up, sold his song catalogue, and fled to the monastery.

The only reason he resurfaced in time for his last and perhaps best act was because a trusted advisor stole all his money. Cohen had to go back on the road, but his time had come and the tour were a vindication of a life’s work.

There is a lot of beauty in this book, the beauty that exists between two old friends who love and understand one another. To the end, the sickly Cohen never lost his sense of humor, sending a photo of himself in bed with the caption: “Pretending to hang in there.”

And then comes Cohen’s final night on earth. At 3:30 a.m., Cohen sends an email to his friend quoting—it Italian—three lines from Dante’s Inferno:

“Through me the way into the suffering city,

Through me the way to the eternal path,

Through me the way among the lost.”

A final email comes in which “Old Leonard” tells “Old Eric” (the way the friends referred to each all their lives) that he’s fallen on the way back from the bathroom and hit his head—hard.

By morning, Leonard Cohen was dead.