A Matter of Will 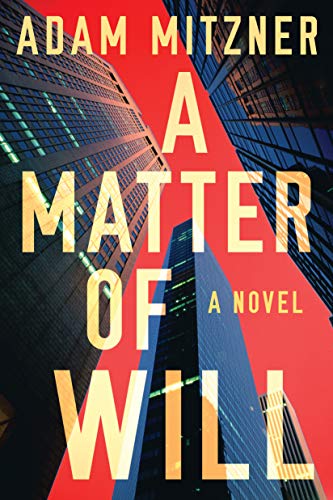 Another Wall Street story of youthful ambition, innocence seduced and corrupted by vast wealth, evil scammers and the promise of happily ever after. A benefit: a murder trial from the point of view of the defending lawyer, who is also a gullible innocent.

The lesson for the reader? It’s admirable to be an “innocent” if you can get away with it.

A Matter of Will begins predictably with an ambitious but flailing young broker as he meets his financial sponsor in a chance meeting at a hockey game. Rich, handsome, impeccably dressed Sam Abbadon and his drop-dead gorgeous woman, Eve, dangle their ease and fortune before Will’s desperately hopeful, gullible aw-shucksness. Will is trying to survive as a broker in New York, and we find him at a low point, ready to be sacked if he doesn’t find a client within a few weeks.

In the stands at the ice hockey game, this flashy man, Sam Abbadon, takes a liking to Will and at the end of the evening, promises to transfer a considerable amount of money into a new account at Will’s place of employment, Maeve Grant, with Will as broker. It all seems like deus ex machina, and too good to be true, and Will really is momentarily saved from personal disaster but begins a journey that leads him entangled in illegal activity, money laundering, and murder.

Eve is, in many ways, the biblical the temptress in the Garden of Eden, with an air of danger about her, especially when one of Sam’s business associates, who openly tries to verbally possess her in front of Sam, is soon murdered.

Sam never reveals much about himself, only vaguely suggesting to Will how he gets his hands on all that money, and because their relationship is so unbalanced, Will gives up trying to find out. Instead, he relies on the Compliance Department at his firm to decide the legality of all his transactions. Money finds its way, and in short order Will begins making more than he could have ever imagined. His business relationship with Sam seems to be one of a lackey, a footman who heeds any of Sam’s requests. The reader has a plethora of questions, beginning with the most obvious: How could this be legal? And why doesn’t Will see it?

The author builds on this tension by putting Will in the habit of quickly obeying Sam’s urgent requests when he sends Will to specific high-priced shops for a makeover, i.e. to be outfitted properly in suits and the trappings of the wealthy. Will goes along and tries it all on, all the glamour, all the perks as Eve tells him what furniture and carpets to buy for his over-priced $9 million apartment.

This arrangement was set up by Sam—in his hurried, pressured way, by detailed suggestion and contracts to approve. Will signs himself away to this entanglement with almost no pause. During their shopping spree, Eve comes onto Will and Will resists, remembering the murdered man, finally admitting to himself the danger he is in while keeping her company.

In the midst of this seismic career change, Will meets and falls in love with a lawyer, Gwen, and they both get to know each other even as they pose as nouveau riche business partners at lavish parties hosted by Sam and Eve. Will muffles any kind of reasonable questioning in his mind about this relationship with Sam. All the while, the reader hears the obvious alarm bells that Will is tuned out of as he keeps signing contracts blindly, taking out loans in exorbitant amounts, and refusing to question any decision Sam urges Will to make, even signing on the dotted line without looking at what he is signing.

This quality of denial in the face of opportunity is not missed by Gwen, who is defending a man from a charge of murdering his wife, a man she believes is innocent. This is her chance, too, to rise in her career, and she cannot help but judge Will and the quasi-legal-probably-criminal life he is destined to live as the private broker for Sam, the international money launderer.

Finally, the tables turn unexpectedly, and Will is caught up in the trap of lies and double identities, unable to escape.

This tale is well crafted, suspenseful, and engaging as we learn about both worlds of trading and the law, as we see the carefully contrived situation close around Will. But for all the high stakes, there isn’t enough soul searching to make it more than a thriller. We don’t share the baby steps in Will’s mind. He’s a decent guy and maybe because of that he doesn’t see it all coming. He seeks solace and normalcy in his relationship with Gwen, but he is in denial about that, too, and he can’t translate the writing on the wall.

The simplistic suggestion that both “good” characters, Will and Gwen, are “innocents” in this cynical world is somewhat of a disappointment. The writer could have done so much more—using Will’s conflict all through the book, showing the reader the baby steps, the small things Will struggles with as he chooses his path toward moral and personal disaster, and how his personality changes decision by decision.