Matt Kramer on Wine: A Matchless Collection of Columns, Essays, and Observations by America’s Most Original and Lucid Wine Writer 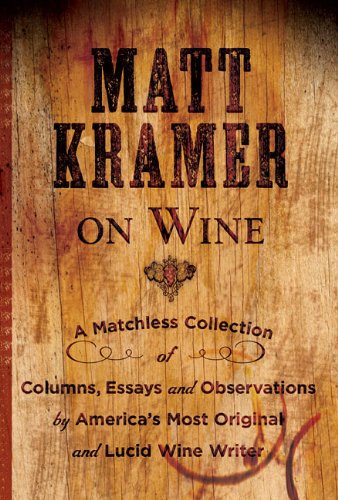 Matt Kramer has been writing about food and wine since 1976. Naturally, someone writing short articles for 34 years will have built up a massive collection of already published material, and the temptation arises to republish it in a book form.

Matt Kramer on Wine is a collection of 111 articles and book excerpts from 1990 to 2009, two thirds of which are his articles in Wine Spectator. Most of us, even if we subscribe to Wine Spectator, do not keep magazines around that far back, and there is something to be said for reading a writer’s articles all at once—if that writer has a perspective that is worth considering. Agree with him or not, Matt Kramer has a consistent perspective that wine lovers should find thought provoking and worth reading.

The articles that Mr. Kramer has selected are not wine reviews such as the ones that he regularly publishes in The Oregonian. Rather, they are articles about wine and the wine business, and general approaches to wine. They are not geared towards the wine beginner, who might find some of the articles incomprehensible, but those who are already seriously into wine will nod knowingly.

The articles are thankfully not in chronological order, but are grouped into loose topics, such as “Tasting” and “Burrowing Deep into Wine Lists and Wine Cellars.” They are unchanged from the original publication, although where appropriate there is a note at the end mentioning things that have changed since then.
Mr. Kramer is so well established that he does not need to be nice to winemakers in order to be routinely invited to some pretty swell tastings. He definitely does not hearken back to the bad old days of wine criticism when wine writers would ask each other, “Have you gotten your case of Lafite yet?” He writes critically of winemakers, restaurants and sommeliers, and wine collectors. His writing style is direct, relatively informal, humorous, and often shows his roots as a history major (like this reviewer). Only a history major is likely to have Marc Bloch sitting around to pick up and quote.

Mr. Kramer is self-assured enough that he can admit that he is a terrible blind taster, but then he reveals a wonderful method, relying on failing blind tasting miserably, for getting winemakers to pull some old wines out of their cellars. One hopes that not all winemakers have read that article.

If Mr. Kramer has one obsession, it is his insistence that terroir is very important. The oldest entry in this book is an extended essay on “The Notion of Terroir” excerpted from his 1990 book Making Sense of Burgundy. He succinctly describes terroir as well anyone: “Although derived from soil or land (terre), terroir is not just an investigation of soil and subsoil. It is everything that contributes to the distinction of a vineyard plot. As such, it also embraces ‘microclimate’: precipitation, air and water drainage, elevation, sunlight, and temperature.” So far so good. But then he goes on: “But terroir holds yet another dimension: It sanctions what cannot be measured, yet still located and savored. Terroir prospects for differences. In this, it is at odds with science, which demands proof by replication rather than in a shining uniqueness.”

So it is going to be difficult for people to tell whether what they are tasting is a true reflection of real terroir. Mr. Kramer admits to the difficulty: “Discovering the authentic voice of a particular terroir requires study. The only way is to assemble multiple examples of a wine from a particular plot and taste them side by side. Ideally they should all be from the same vintage.” Furthermore, one must taste first-rate wines, because second-rate wines will not express terroir. Not only that: “Terroir usually is discovered only after repeated attempts over a number of vintages. This is why such insight is largely the province only of Burgundians and a few obsessed outsiders” (like Mr. Kramer).

One therefore needs to taste a good number of Meursault Perrieres, for example, and then taste some Meursault Charmes, the adjacent plot, until “the distinction clicks into place in your mind.” Even so, Mr. Kramer admits, one is not likely to be able to spot it unerringly in a blind tasting of a group of Meursaults.
Thus, in order to get an idea of a particular terroir, one needs to drink one heck of a lot of wine over a number of years, and not just drink it but drink it in a systematic fashion. Then once one gets the terroir of one vineyard, one moves on to the next and the next and the next. Nice work if you can get it.

Getting a sense of a particular terroir is therefore beyond the reach of 99.9 percent of wine drinkers, who do not have the money, time, and inclination to conduct such a study. It is not that the drainage of the soil, climate, elevation, etc., do not have an effect on wine. The problem is that it is far too much work for most of us to be able to pick out those effects. With some experience in tasting, we can get a sense of the relative quality of wines, and appreciate when a wine is of unusually high quality or is otherwise of interest. But we will not notice the fine distinctions between terroirs, and we may not be able to tell whether a wine’s wonderful complex aromas and flavors come from a faithful expression of a particular vineyard’s terroir or from some grape-growing or winemaking method that brought out features that the winemaker particularly wanted to emphasize. We will just have to make do with these pleasures of a fine wine. And perhaps with the exceptions of a few wine regions in the world, so will Mr. Kramer.

Mr. Kramer also makes, in this reviewer’s opinion, an artificial distinction between winemakers who let a wine express its terroir and those who somehow manipulate the wine to make it something different. Even a self-proclaimed “hands-off” winemaker makes a myriad of decisions that substantially affect how the wine turns out. But that is the subject of another review.

Even though the book contains articles that do not add much to the dialogue, most articles are quite short (one page of Wine Spectator), so one can read them in a couple of minutes and move on. Matt Kramer on Wine is kind of like tasting wines at a wine festival. One needs to drink through a lot of wines, but then one finds nuggets of greatness that make the whole exercise time well spent.