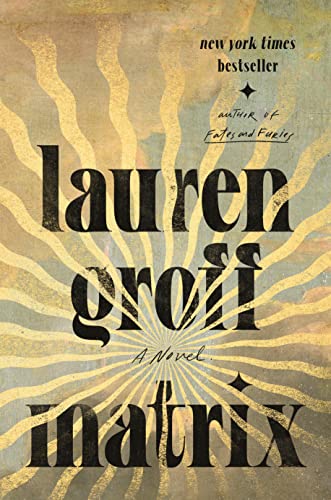 “A beautiful evocation of what women can achieve and what they can mean to each other.”

Lauren Groff’s newest book, Matrix, presents a fictionalized biography of Marie de France, the medieval poet who began her life in France, ending it in England. There is no historical record of who exactly Marie de France was, but she probably wasn’t an abbess, as in this portrait. Instead, Groff uses Marie’s literary works and possible relationship with Queen Eleanor of Aquitaine as a jumping off point for her character’s invented life.

The role as abbess allows Groff to explore a world entirely of women. One of the few places women had any agency in the 1100s was in a convent. In fact, Hildegard of Bingen, an abbess in Germany, provides another model for the character of Marie. Hildegard not only effectively ran her prosperous convent, she had ecstactic visions (much as Marie does in Groff’s book), and wrote on a wide variety of subjects, from poetry to drama to theology to medicine. She also wrote music and is perhaps best known as a composer.

Groff uses this kind of model to create a world of women working and living together, protecting themselves from the outside world through Marie’s clever ways of consolidating allegiances and power. The convent is poor, the nuns starving, when Marie takes over as abbess. By her death, she’s provided wealth, status, and security to her community. How she accomplishes this is a major thrust of the book, along with female creativity and friendship.

Medieval life can seem far from our modern grasp, but Groff vividly describes the daily workings of the convent, from prayers to practical chores. She has done her research and it shows in the rich details she provides of working the fields, preparing meals, governing novices.

Marie personifies creativity in her visions and writing: “The life of the abbey is the dream. The set of poems she is writing is the world.” Initially angry at being forced into convent life, shoved away from reality. Marie discovers the freedom the religious life offers her and the other women:

“It is because this prayer is enclosed within the chapel, she sees, not despite the enclosure, that it becomes potent enough to be heard.

“Perhaps the song of a bird in a chamber is more precious than the wild bird’s because the chamber itself makes it so.

“Perhaps the free air that gives the wild bird its better song in fact limits the reach of this prayer.

So small, this understanding. So remarkably tiny. Still, it might be enough to live for.”

In fact, this realization becomes much more than that. It becomes one of Marie’s guiding visions—the convent as ultimate freedom rather than a prison.

“She has passed from the temporal to the everlasting. She has committed herself to this scraggly awful place, to these women she hardly knows. There is in fact a change in her, something subtle, but every time she tries to touch it, to turn it aournd and consder it, she is left holding nothing.”

The “scraggly awful place” becomes a beautiful haven, almost magical because of Marie’s projects, from a protective labyrinth to a majestic abbey house. This story is similarly magical, a beautiful evocation of what women can achieve and what they can mean to each other.