The Matchbox That Ate a Forty-Ton Truck: What Everyday Things Tell Us About the Universe 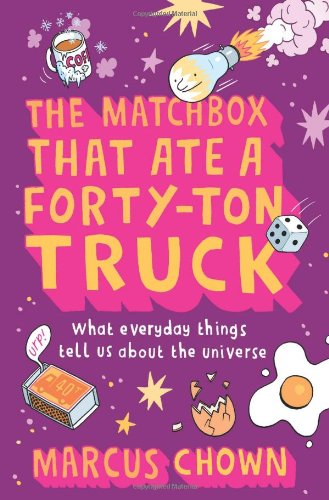 The world of popular science writing is a fiercely competitive one, and its inhabitants attempt to ensure their own survival by choosing an audience (technically educated or not? And at what level?) and adopting a tone.

We might, arbitrarily and very broadly, identify science writers as belonging to one of three schools when it comes to tone: straightforward (e.g., Stephen Hawking’s A Brief History of Time), lyrical (anything by the late Carl Sagan), or whimsical, of which Marcus Chown is an insouciant example. In his latest book—he has written six others—Chown, who is the cosmology consultant for the journal New Scientist and a former astronomer at Caltech, offers up a dozen essays that use everyday phenomena as the jumping-off points for remarkably thorough yet accessible explanation of some of the most daunting and counterintuitive aspects of modern physics: from quantum mechanics to cosmology. Chances are that you do not ruminate upon the properties of photons when you look through a glass window and see your own ghostly reflection superposed upon your outside view. But Chown does, and mines a rich pedagogical vein in the process. The fact that window glass is mostly transparent but also partially reflective means that most photons—about 95% —pass through it, while about 5% are reflected back. But how does any particular photon decide whether to soldier onward or turn back? There is no way to tell, and it is this fundamental uncertainty—the fact that at an atomic or subatomic level some events can only be described in terms of probability—that is the basis of quantum mechanics. Indeed, the realization that this was the case rocked the world and changed the course of physics in the early part of the twentieth century. Einstein hated it—“God does not play dice with the universe”—but your cell phone works because of it, and, for that matter, so does the glass in your windows. But what about that eponymous voracious matchbox? An atom is about a billionth of a centimeter across, a wavelength of visible light about 500 times that. But as its electrons change their energy states, an atom can absorb or emit photons of visible light; that’s how a laser works. Chown imagines the size discrepancy by likening it to someone producing a matchbox that swallows an oncoming truck, a feat that would raise more than a few eyebrows in the macroscopic world but is part of the landscape—and critical for the functioning of the universe—down where atoms live. You may never have thought about it before but you will now: How can that even happen? For Chown, that goofy image is the first step in explaining how light behaves as both a wave and a particle; how quantum mechanics not only allows but demands that things be in two places at once; and how electrons have the property of spin. His explanations are breezy yet technically crisp, leavened with the occasional offhand remark and informed by the personalities, styles, and quirks of some of the major historical figures who made the discoveries. Each of the book’s twelve chapters opens with an intriguing title and a blurb of what the world is telling us (e.g., “No More Than Two Peas in a Pod at a Time: How the variety of the world is telling us that there must be something that prevents electrons from piling on top of each other”), followed by a related philosophical précis of a profound problem you’ve probably never considered, such as, if atoms are mostly empty space, why are things solid? The chapters progress roughly in scale, starting with atomic phenomenon and working up to the origin of matter itself in the Big Bang, and ending with a chapter about the possible (non)existence of extraterrestrial life. Each is self-contained, but the progression is a logical one. Chown uses no math, his explanations are clear, his examples tangible. He may be over-reaching; readers without at least some distant college physics may find themselves seduced into following him into ever-deeper waters, happy to go along because the company is so congenial, but later finding in retrospect that understanding was a little more elusive and ephemeral than it seemed at the time. Still, by the end, the reader is likely to be more than a little impressed with how much has been inadvertently absorbed about a gratifyingly wide array of physics. In the very worst case, you’ll enjoy the ride, have a lot to think about, and afterward probably be able to hold forth at parties on some entertaining and important arcana!