The Masterpiece: A Novel 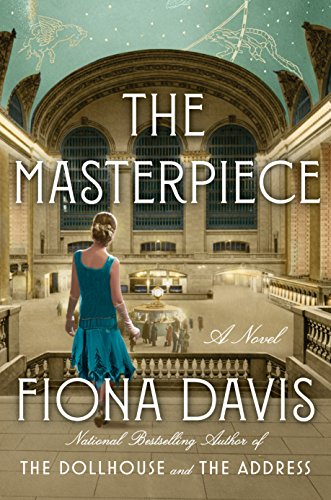 “The Masterpiece is a beautifully crafted, meticulously researched story.”

Grand Central Terminal (or Station as most know it) is the main location of Fiona Davis’s latest novel The Masterpiece. The story begins in the heady 1920s when the station was opulent and times were good. The station housed the Grand Central School of Art where protagonist Clara Darden, an illustrator trying to be taken seriously by New York’s staunch art world, is tenuously employed on the faculty. Not only is Clara a woman, but also an illustrator which to many means simply “a magazine cover or an ad, and then . . . trash.” But Clara is not easily discouraged and when challenged by fellow faculty member Levon Zakarian does not back down.

Clara has risen from hard times and is determined to make a name for herself. With the help of friend, and eventual lover, Oliver Smith, she makes the right connections and becomes a highly sought after illustrator. But even fame and wealth are not enough to win over the hearts of the snobbish art community who believe that illustration is simply “business.” But Zakarian recognizes Clara’s talent and together they begin to work on something completely new and different.

As we become immersed in Clara’s world, we are then drawn to New York in 1974. Grand Central Station has lost its opulence and is now the center of a lawsuit in which the owners, Penn Central, are seeking to tear it down. Dilapidated and neglected, Grand Central Station becomes the place of employment for cash-strapped divorcee Virginia Clay who finds herself forced into working at the information booth of the terminal to get by.

Stumbling upon the ruins of the Grand Central School of Art, Virginia finds a watercolor that is reminiscent of a painting she saw in an auction catalog. The soon-to-be auctioned painting is signed by a mystery artist named Clyde, but attributed to Levon Zakarian. But as Virginia studies the discovered watercolor, she finds eerie similarities in Clyde’s signature and that of Clara Darden.

If Virginia can prove the painting about to be auctioned was created, not by Zakarian, but Darden, this revelation will set the art world on its heels and give Darden the acclaim she deserves. But Clara Darden has been missing for decades and the watercolor has been confiscated by the former proprietors of the Grand Central School of Art. With few resources at hand, Virginia must work to find out whether Clyde is Clara Darden and what happened to the artist.

A study of contrasts, The Masterpiece switches the reader effortlessly between the glamour of the 1920s Grand Central Station and its subsequent decay in the 1970s. Even the protagonists, young and fierce Clara Darden and older and scarred Virginia Clay are completely different, and yet these differences serve to complement and enhance the story.

Fiona Davis achieves a world in which fictional characters and real life seamlessly meld. Real life persons such as Jackie Onassis fall into Davis’s story believably, and Grand Central Station is so lovingly described it takes on its own persona. In fact, without the author’s note at the end, one could easily think Levon Zakarian and Clara Darden really taught at the Grand Central School of Art.

Davis’s characters are crafted with believable motives, problems, and back stories. The book’s message, “even if it is the eleventh hour, there is always hope,” may seem pedestrian, but it works. Delivered by Jackie Onassis at the right time, it is the catalyst that keeps the protagonists going when all seems lost. And it is a powerful reminder of the power and inspiration of words.

Set against the landmark ruling that stopped its destruction and insured Grand Central Station’s historical significance, The Masterpiece is a beautifully crafted, meticulously researched story.