The Master Switch: The Rise and Fall of Information Empires 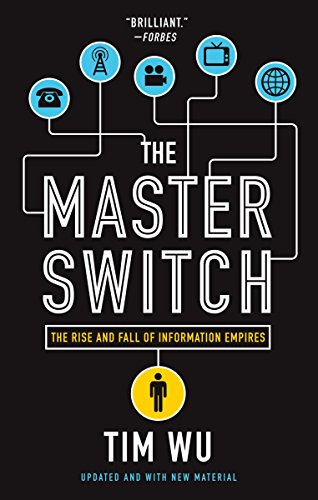 Would the ideas Tim Wu espouses in The Master Switch: The Rise and Fall of Information Empires have been published if we weren’t still picking through the wreckage caused by the financial sector?

That catastrophe has ushered in a new movement of the righteous. Publishers nowadays are looking for both the wisdom of hindsight and the new warnings being trumpeted for any and all business sectors.

In that spirit, Wu, a law professor at Columbia University, has come up with solutions to problems that haven’t actually occurred in our information economy. It may make his intent attractive to those who believe ubiquitous industries such as energy, finance, and information should be regulated, but it’s also what makes his book so curious.

The bulk of The Master Switch looks at media industries and their dominant companies of the past 150 years: AT&T and the telephone (full disclosure: this reviewer worked for a number of years at AT&T); Paramount Pictures and the movies; and RCA with radio and television.

Instead, he focuses on the ravages of a market system where the strong winnow out the weak (he names it the "Kronos Effect" though most say “competition”) and the push and pull between open and closed models is constant—what Wu calls the “Cycle.” His greatest fear is given to the book’s title—the effort to centralize the flow of information so that it may be controlled by a single entity.

Wu believes things should have been better during the last hundred years—more creativity, equity and justice for inventors and consumers—but how, he cannot say. This is treacherous territory to say the least, and it puts Wu in peril of moving from the role of academic utopian to technological fabulist.

After this 298-page windup, Wu throws his pitch: There are people at Viacom, Time Warner, Verizon, and other behemoths who want to take your Internet experience away from you, but Wu has a solution: New regulation will keep the openness and creativity of the Net intact.

Of course regulating the Internet means trusting the government, but such faith seems particularly ill-timed; just recently, the Obama administration proposed legislation that would increase the government’s ability to wiretap everything from email and downloads to Internet telephony and web searches. If anything, the very government Wu would like to entrust with conservatorship is the one that may ruin things.

Nevertheless, Wu proposes a separations structure similar to our branches of government. It would require those who develop information, own the network infrastructure on which it travels, or control the tools or venues of access be kept apart from one another. It is also the basis for what is known as “Net Neutrality,” something Wu has been closely associated with.

But then he asserts that the government must also keep its distance and not intervene in the market to favor anyone–yet recommends the Federal Communications Commission implement and monitor the policy. This assumes an FCC chairman will have greater perspective and wisdom than businesspeople, keeping in check their animal spirits.

However, The Master Switch’s most fatal flaw is its tribute to Google. Wu takes pains to show how it is unlike other companies that turned early technology into monopolies–but to do this he tacks closely to a traditional antitrust model of vertical integration, maintaining Google has attained its market power through “specialization” and that it more resembles an academic institution than an industrial complex.

This is disingenuous by half. Google is no different from U.S. Steel and Standard Oil. It has redefined copyright and intellectual property customs to its own advantage by simply scanning, without permission, millions of works, and then challenged affected industries to “sue me”–exactly the same tactic used by RCA’s David Sarnoff to rob Edwin Armstrong of the patent rights he rightfully earned by inventing FM radio.

Professor Wu’s high regard for Google makes his proposals even more suspect. Net Neutrality was pushed into the political arena by Google in 2005 when it feared it would be squeezed by AT&T with higher fees for using its network. It enlisted a phalanx of academics, lobbyists, activists and organizations (including Mr. Wu’s own group, Free Press) to portray its business initiative as a public policy debate.

The Master Switch was likely in galleys when Google unexpectedly broke loose from the coalition it formed and crafted a private agreement with Verizon that severely compromised what it originally advocated. One can only speculate whether, given the chance, Wu might have revised his paean to Google.

Wu may want a separations structure or Net Neutrality (whatever “neutral” means), but the information economy is already bound by layers of regulators including the FCC, FTC, the antitrust division of the Justice Department, the Office of Telecommunications Policy and others. These institutions helped break up AT&T, separated the movie studios from their chains of theaters, and still review every merger and acquisition that is proposed.

Yes, Wu correctly identifies the cycle of closed and open industries in America, and such a tug of war will continue. But the central planning that Wu castigates when it came to the old Bell System is exactly where his proposals are headed. Better that those who have the incentives to create and prosper—the daring jockeys of the marketplace—continue to hold the reins rather than the risk-averse coachmen of government bureaucracy.