Master of the Mountain: Thomas Jefferson and His Slaves 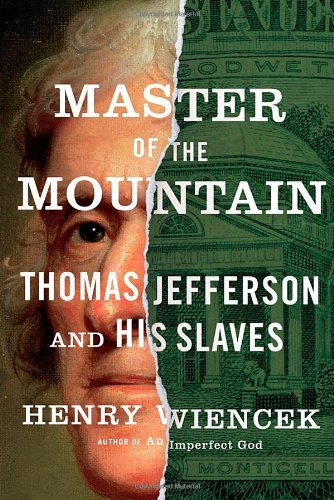 “To say Master of the Mountain is compelling would be to understate the value of Henry Wiencek’s scholarship.”

Archeology—of any stripe—gives us an opportunity, a duty, to understand more fully events and people in our past. It should force us to relegate present-ism to the background in favor of objective proofs.

The scholarship and archaeology surrounding our venerated Monticello is but for the hard truths of artifacts a centuries-old miasma that clings to and protects Thomas Jefferson, something which Henry Wiencek artfully dissects in Master of the Mountain: Thomas Jefferson and His Slaves.

Mr. Wiencek is unreservedly aware his study may raise hackles, especially among those who choose absolute reverence over thoughtful discourse. He even acknowledges when he set forth on this project “I did not know what I would find and my conclusions may not be to everyone’s liking.” Controversy is one thing, but upending our carefully protected notions of a staggering historical figure in American history is precisely what we need to properly understand slavery as an institution and Jefferson as perhaps its most prominent agent.

Much is written about Jefferson’s anti-slavery tirade in his initial draft of the Declaration of Independence but criticism of his slaveholdings at that very time is seemingly held at bay by the Founder’s ability to dodge artfully behind his own carefully crafted reality distortion field. The young Jefferson, idealistic and a potent voice for revolutionary sentiment, wrote withering screeds against the institution of slavery calling it “this execrable commerce,” a “cruel war against nature itself.” This is the deified vision of Jefferson which history would wish us to remember.

More revealing, indeed unsettling to our sense of patriotism, are the many ways Jefferson found to rationalize slavery. Can we entirely dismiss (or even disregard) a body of evidence solely because it doesn’t jibe with our sanctified—even sanitized—grasp on our ignominious past? Anyone seeking the truth knows the answer.

Mr. Wiencek is keen to keep the narrative focused. He gets behind the scenes of Monticello and provides us a view of both master and slaves, of lives and families on both sides. He is unapologetic in his exposition, laying out facts and theories as revealed through deep study of Jefferson’s letters and diaries and careful observation of other scholarly work.

The author shows us a Thomas Jefferson who loathed confrontation and spoke of wanting his laborers treated with dignity, yet the same Thomas Jefferson sent instructions to his overseers to use whatever means necessary to ensure high productivity.

Jefferson openly wrote about and spoke in the courts of France of black inferiority, that their ability to care for or govern themselves was equal to that of a child. But this rationalization gave him the reasoning to train the same “inferior” beings to do various skill and trades at Monticello, which in turn made them an increasingly valuable property.

What must be borne in mind as one absorbs this book is the deeper questions faced by Jefferson and other Revolution-era slaveholders. Many of these men felt a profound sense of patriotism and pledged their very lives for the ideals of liberty, ideals that Mr. Wiencek, like many others, pulls out and sets before us, not for the purpose of drawing a distinct conclusion but more to help remove some of the fog from the historical mirror.

If we are to properly understand Thomas Jefferson then we must have the truths set before us, objective and unbiased. A disgust of slavery is not a modern notion; anyone reading Master of the Mountain with their eyes and mind closed will assuredly be missing a golden opportunity for expanding their understanding of such a critical issue, one that has been allowed to recede with time instead of being an important part of any discussion regarding American legacy.

Perhaps most repulsive is the breakdown we get of Jefferson’s calculus in proving that slaves actually perpetuated profit by their very growth in numbers. It is stunning to see one of our most honored forefathers in such a cruel light.

But again, we must set aside modern attitudes and values, if only while among the pages, so we may more fully immerse ourselves in late 18th–early 19th century circumstances, not as a rationalization but as necessity.

Those wishing to come away with a tidy conclusion, or those who need absolute answers, may not wish to sink their mind or souls into this volume; there are no easy conclusions, nor any distinct answers. Jefferson’s paper trail has assured us plenty of obfuscation.

The point shouldn’t really be about finding a solution to the riddle, rather it should be about the path to understanding—agree or disagree—but our heritage chides us to consider pro and con, to listen to both sides of a story and to not only consider but require every honest detail. The ultimate decision rests with the individual, and this book won’t likely resolve any controversy, but it will shed light where once were murky shadows.

This book makes no effort to provide an apotheosis for Jefferson, neither does it seek to destroy his legacy as one of this nation’s most beloved founders. To say Master of the Mountain is compelling would be to understate the value of Henry Wiencek’s scholarship—to say it is imperative reading would be the most befitting, most legitimate clarion call to any student of Jefferson or of American history.