The Master: The Long Run and Beautiful Game of Roger Federer 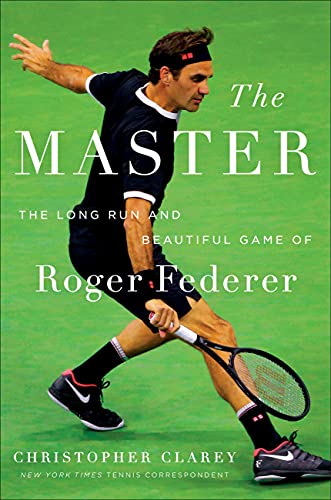 “If you are a lover of the game of tennis, admire Rodger Federer, or want to know more about him, The Master is the book for you. . . . take a chance and immerse yourself in this fine biography.”

In The Master Christopher Clarey analyzes and describes the style of tennis played by Federer. It is smooth, with a liquid quality attainable only by athletes who have mastered the complexity and difficulties of their sport. Only the truly great ones do this. The names Gretzky, Woods, Ali, and Carew come to mind.

Clarey is interested in character and style that is influenced by his heritage. Federer's father Robert is Swiss, and his mother Lynette is South African. One result is that Roger speaks multiple languages, including Swiss German, Afrikaans, English, and French. Clarey sees both of those cultures as prominent in forming Federer's character leaving him open to cultural differences while anchored in his Swiss heritage.

The evolution of Federer's personality is tracked in great detail. Federer slowly learns to control his temper that was on full display in his pre-teen and teenage years, both on and off the court. Early on he mastered the art of obscene language and the demolition of tennis racquets. As Clarey notes, often when you watch Federer play now, it is nearly impossible to fathom his intemperate past on the court.

Federer's coaches, agents, and trainers all contributed to his development. Of the early coaches Peter Carter seems to be the most important along with Peter Lundgren, who became Federer's traveling coach replacing Carter. Others followed, each contributing to Federer's on-court development.

Not long after being replaced as Federer’s Coach, Carter was killed in an automobile accident while on his honeymoon in South Africa, a location recommended to him by Federer. The pain Federer felt when he replaced his friend as coach was then multiplied many times over. Clarey and others believe this was a major factor in Federer's maturity and his total dedication to tennis.

The most important person in Roger Federer's personal and professional life is his wife, Miroslava Vavrinec Federer, "Mirka." She was a Swiss professional tennis player and the daughter of immigrants. She and Roger played on the Swiss Olympic team in Sidney. They began dating when Roger was 19 and she was 22, much to the consternation of many of Roger's friends. Mirka’s tennis career ended due to a foot injury.

As it turned out, Mirka became a significant force as Roger's defacto business manager and administrative assistant, not to mention a stabilizing mental and emotional force. They had four children, two sets of identical twins, the girls born first and the boys a few years later. Remarkably, they all traveled together and can be seen in the player’s box at the major tournaments. They live together in one large room in their hotel, and the Federers enjoy life on the road. Roger wants the children to travel with him and sees this as a key part of their education.

Many of the key insights in this biography come directly from Roger Federer, whom Clarey quotes with some frequency. Clarey skillfully provides context and, in the process, captures the complexities of Federer as a human being and the complexities of his life.

Roger sees himself as Swiss and is dedicated to Swiss tennis. He is also devoted to the game of tennis, doing all he can to promote the game, develop young players, and steep himself in its history.

Various chapters are devoted to Federer's tennis rivals. The portraits of Rafael Nadal, Novak Djokovic, Andy Roddick, Marat Safin, and Pete Sampras are very well drawn. Clarey captures the rivalries on the court, reveals Federer's views of his rivals and, their views of him. Clarey recounts the most memorable matches of the rivals at The Majors and in other important tournaments. Some of the best of this material comes in the examination of the rivalry and friendship between Nadal and Federer.

The money in tennis is massive, and Clarey characterizes Roger Federer as a corporation. The combination of Roger’s understanding of the business; Mirka’s guidance of the Federer image and interests, as well as that of the Federer team; and the diligence of the agent from IMG are among the significant elements that contribute to Federer’s financial success. Clarey offers a sound analysis of this aspect of the Federer corporation, and presents with some clarity the intricacies of the financial world of modern sports.

Clarey writes about tennis as well as you will find anywhere, and most of the recounting of the battles at The Majors are riveting. He captures the aura of Wimbledon, the tension of individual points, and the strategy and drama of sets and matches as they unfold.

Arriving at the last word in the final sentence of The Master you feel as though you know Roger Federer and all of those who have shaped his life from early childhood to the very near past.

If there are drawbacks, they involve the proliferation of detail well beyond what is necessary. Many will find that they do not need to know the bios of everyone Roger Federer has met across the tennis landscape. For the devotee, however, these are minor issues.

If you are a lover of the game of tennis, admire Rodger Federer, or want to know more about him, The Master is the book for you. If you are none of these things, take a chance and immerse yourself in this fine biography.