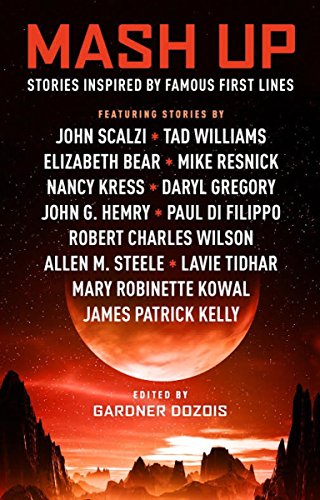 What a strange and wonderful book this is. Mashup is a collection of stories, as the title indicates, based on famous first lines.

“The Big Whale” is a delightfully tongue-in cheek retelling of Moby-Dick as a whaling noir-detective story, featuring Ahab's land-bound wife fearing that Moby is a mistress and hiring Ishmael to find out who she is. Noir tropes like being shot at from dark alleys and getting information from shady people in bars works remarkably well for whalers.

“Every Fuzzy Beast of the Earth, Every Pink Fowl of the Air” is a silly Monty-Python-esque take on Genesis where God's daughter Sophia messes up the Plan while building the Earth while God is sleeping, much to the alarm of the angels. The rest are wildly divergent from where their first lines started, often both in genre and in tone. Each one is unique.

The stories are long enough to really sink your teeth into, which is good when the whole is such a diverse collection of different styles and techniques that shorter stories might give a sort of whiplash as the reader switches from one story to the next. Their length also lets the worlds be clearly defined and fleshed out, without getting too long or too wordy. They are long enough for the stories to feel real, but not so long that they become half-written novels. These are short stories at their best.

For instance, “Begone” is a study in paranoia from the point of view of the first Darren who was replaced part way through the run of Bewitched and treated as if the second is the same person—all while never quite mentioning that that's what it is, so the surrealism of magic in a normal-seeming world really comes through. It's a much more sinister take than the sitcom ever had.

Between the tales of unwanted doppelgangers and ghostly encounters with the Fae, stories of weird science, and writer's block, the authors introduce their own work. Almost as interesting as the works themselves, these intros give us hints at how each writer chose their first lines, what they meant to do when they wrote the piece, and how their process works—something that's always interesting. Also interesting, in some cases, is how different the writer's own voice is from the voice of their stories.

The book, taken together, has a deep sense of play. These well-known authors are borrowing not just great first lines and mashing them up with new stories, but also creating mashups of genre and style that they might not have had the chance to create otherwise.

Even in the more serious stories--such as “The Red Menace”—a tale of surviving a war with a Leninist alien planet that starts during WWII and how it changes the history we know—the way the authors put the pieces together is fun to see unfold. The joy of playing with ideas and words and meaning shows through many of the stories and it makes the majority of the book fun to read. Interplanetary alt-history utopianism is a rare find and fits perfectly in a collection like this.

There is something for everyone, as an anthology should have, from the crassness of “Karen Coxwain, Or, Death as She Is Truly Lived” and her dangerous and sometimes perverse trip through Hell, to the artistic beauty of “Fireborn” and its tale of a competition to be the best skydancer and earn an immortal place on the moon. And while “The Lady Astronaut of Mars” is probably the saddest of the stories in this book, it's also the one closest to classic scifi, reminding us of the wonder of space and exploration, while the first woman to travel to Mars decides whether she can leave her ailing husband to be the first on the next alien world.

These stories tend to be exciting and excitable—a gleeful pile of neat ideas stitched together and polished into a series of cool stories that are entirely themselves, joyful or deep, weird or shocking, haunting or silly. These are writers at the top of the scifi and fantasy genres having fun with their craft and writing experiments that are, across the board, successful. If this is how writers make their jobs interesting, let's have more stories like this.