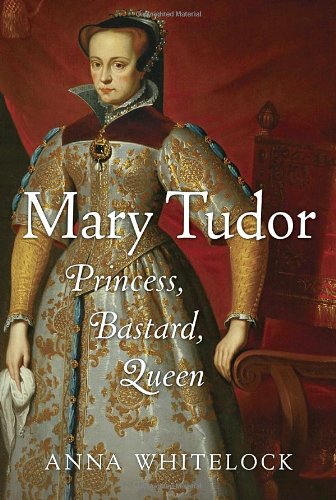 In Mary Tudor: Princess, Bastard, Queen, Anna Whitelock sets out to offer a picture of English first Queen Regnant as something other than the “weak-willed failure as so often rendered by traditional narratives, but a complex figure of immense courage, determination, and humanity.”

While Whitelock’s aim to take Mary Tudor beyond the image of “Bloody Mary” is a laudable one, it is questionable whether she succeeds or not. The Sunday Times blurb on the back of the book praises Whitelock’s “timely portrait of a religious fanatic”—perhaps dubious praise for a book that takes as its aim demonstrating that Mary was more than the Protestant burnings and religious intolerance that marked her reign.

While its success as an alternative account of the titular monarch’s reign is mixed, Mary Tudor is a detailed, well-written, and meticulously researched piece of biography. Whitelock takes her readers on a detailed tour through English history and does an excellent job of laying the groundwork for the events that would shape Mary Tudor’s life, her politics, and the shape of the nation she governed.

Whitelock sets out to show that becoming the first woman to rule England in her own right was no small feat, and she does this admirably. She carefully traces the traditions in English monarchy that made it nigh impossible for a woman to succeed to the throne. She also delves into the period’s attitudes about women and men, giving readers a vivid sense of the prejudices Mary would confront when she did finally take the throne— prejudices in some way ameliorated by the time her sister Elizabeth assumed the monarchy, though in some ways still firmly in place at Elizabeth’s ascension.

Whitelock begins with the celebrations of Mary’s birth in 1516 and uses a unique narrative style of presenting an event, then casts back in time to give that event context. She takes readers through the significant chapters of Mary’s life: Princess, in which she was recognized as the legitimate daughter of Henry VIII and thus a valuable marriage prospect and important part of Henry’s foreign policy; Bastard, during which she was declared illegitimate after the divorce of Henry VIII and Katherine of Aragon, estranged from her father, and alternately ignored and considered a real and terrible threat to the fragile monarchy of England; and Queen, in which she assumed the throne after the death of her brother Edward and the placement of Jane Grey on the throne for nine days.

Whitelock’s description of the historical and political events that mark each period is detailed but still accessible to a popular audience. She provides enough context that events and personalities do not emerge from a vacuum, but not so much that she loses the main thread of her narrative.

Woven in with the grand historical and political events, Whitelock attempts to humanize her subject, something that other biographers have not necessarily done. She dwells at length on the importance of Mary’s faith—not just in the political battles over the Mass and reconciliation with Rome, but in her daily life. Mary Tudor has been, perhaps rightly, painted as something of a religious fanatic. Whitelock’s account does not diminish this image, but it does put Mary’s faith in a personal context and helps the reader to at least understand the importance of Catholicism for Mary and the role it played in her life and politics.

This does not, however, do anything to diminish the absolute horror of the religious persecutions during Mary’s reign, which the book describes in sometimes chilling detail. Mary Tudor does not emerge a more sympathetic figure. This is no reflection on Whitelock’s research or writing. It is doubtful, given the raw historical facts of the brutality of the tortures and executions of Protestants and other “heretics” during the period, that any writer could make Mary Tudor appear as anything less than a cold-hearted zealot and tyrannical religious fanatic.

The jacket notes for Mary Tudor declare that Whitelock will “set the record straight” on Mary Tudor’s reign. While she does succeed admirably in putting Mary’s personality, beliefs, and reign into a larger historical context, it is questionable whether she “sets the record straight.”

The reader is promised a greater understanding of what it meant for Mary to be the first woman to inherit the English throne, an account that will show that Mary was not the failure and the tyrant of popular lore. For the most part, thought, Mary Tudor does not reimage or reimagine England’s first queen. It is true there were many factors that made it difficult for Mary to ascend to the throne, and Whitelock does an excellent job describing them. However, this does not translate to any kind of convincing argument that Mary was successful in her reign beyond securing the throne, and it does not counter the historical facts of the brutality of her reign toward her subjects.

Though Whitelock does not necessarily offer a dramatic reinterpretation of Mary Tudor, the book is worth a read for history buffs and Tudorphiles. Those looking for a feminist retelling of Mary Tudor’s story will be largely disappointed.

Those wanting a vivid picture of life in Tudor England and an engrossing portrait of Queen Mary herself will find this a page-turning read.