Marvin: Based on The Way I Was by Marvin Hamlisch 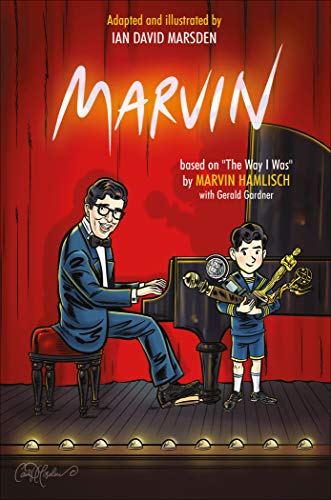 Marvin Hamlisch is a famous Broadway composer who worked with Barbra Streisand, Liza Minelli, and Christopher Walken, among others. This graphic novel describes his childhood and early days in the music business. The writing is lively, from descriptions of his childhood studies (he’s only six years old) at Juilliard to his first breaks selling songs and then working on his first production, Funny Girl with the newly discovered talent, Barbra Streisand.

The Juilliard scenes are wrenching as Marvin struggles with stage fright and the pressure of exams. “Looking back on those early days of pain and panic, I really don’t believe that the mind of young child is designed to handle this kind of pressure. At such an early age you are already auditioning. Yet, you might not believe this, but if I had to do it again, I would.” The reason is not because of all that he learned from his teachers but because of how his father tried to reassure him: “I would. I’d do it for those fifty minutes on the roof, alone with my father.” That scant hour was so important because of the love and support he felt from a father he desperately wanted to please.

Marvin’s father was a musician himself, exiled from his beloved Vienna by Hitler’s rise to power. Both of Marvin’s Jewish parents narrowly escaped the Nazis, and Marvin grows up with a deep sense of his own fortune, living in the safety and comfort of New York. What his father tells him on the roof is that even though Marvin prefers writing catchy songs to the classical music adored by the elder Hamlisch, his father sees and appreciates his young son’s talent: “’I know you like to write songs, and the better the pianist you are, the better you can play them. Years from now, you’ll know what all this means.’ Then he kissed me on my forehead.”

It’s a gift Marvin treasures and takes to heart. He pours himself into the piano, making the keyboard an emotional home. By sixth grade, he’s put on his first production, by high school he’s written his first musical score. From there, he has a chance meeting with Liza Minelli who gets him his first big start on Broadway.

From Broadway, Marvin goes on to compose soundtracks for movies, which is as much about timing as creativity: “You can write the greatest minute and thirty seconds, but if they only need a minute twenty-eight you haven’t done the job. I couldn’t help but think that if Frederic Chopin had written the ‘Minute Waltz’ and brought it to Sam Speigel [a producer], he might hear Sam say, ‘Freddy, I love it, it’s catchy. But we only need fifty-eight seconds. Go home and try again.’ That’s the mechanical part of motion-picture scoring. The other is more important: the creative decisions on what kind of music will go where.”

The graphic novel ends with Marvin’s first award, a Golden Globe, followed by a nomination for an Oscar. The reader gains a strong sense of how driven Marvin was, from very early on, to follow his musical destiny. It’s a compelling story but may be hard for the eight to twelve year-old age range the book is targeting. It reads more like an adult graphic novel than something written for middle grade, as is clear from the quotes given here. This is very much a story that’s told, not shown. We are with the adult Marvin, remembering his childhood, not the kid Marvin, living it.