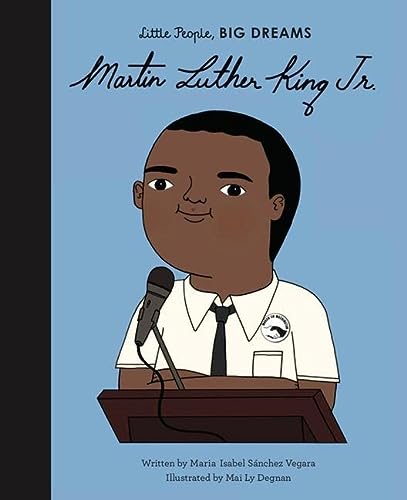 Martin Luther King Jr.: Little People, Big Dreams starts out with a young Martin standing on a box in a long black robe, preaching to his family and friends. Turn the page, and Martin is being sent home from a white boy’s house by his mother because he was black.

“That day, he realized something terrible was going on.”

Turn the page and Martin’s white friend is waving goodbye as he gets onto the white school bus.

“This terrible thing was called segregation.”

Martin promised to fight it with words. The next page-turn shows Martin in college at one of the libraries. Then he became a pastor in Alabama. Then the Rosa Parks bus incident happens on the next page. Martin asks his parishioners to avoid taking the bus. The next double-page spread shows black men and women locking arms in memory of crossing the bridge at Selma.

Martin was arrested 29 times, as is shown by the white police officer leading a handcuffed Martin to the squad car.

The next spread shows Martin in Washington, D.C., giving his “I Have a Dream” speech. He won the Nobel peace prize the following year.

The book avoids his assassination. The last two pages show a four-photograph timeline and gives more detail about King Jr.’s life but still avoids his death, although a clever child can figure out from his birth and death dates how old he was when he passed away.

The art is done in black, brown, yellow, and oranges with touches of gray-green or gray-blues plus white. Some of the church parishioners have pink embellishments on their outfits, and also in the clothing of the crowds watching Rosa Parks on TV through the windows of the appliance store.

Black letters appear on colored backgrounds—blues, greens, grays, olives, browns, and occasionally white ones. The end papers are a series of white picket signs on brown wooden poles. There is no writing on the signs—they are all blank. The cover is a Wedgewood blue with a thick black binding.

This book boils down the essence of Martin Luther King Jr and his short life. It is clear, concise, and gives a young reader a sense of who the man was without going into the details of his murder.

Where was this book when Boomers were in grade school? It has taken decades to get Martin Luther King Jr.’s story onto the library shelf. Although many publishers have a young readers series of historically important Americans, this one might be a better one to show, in just over 400 words, what the man meant to the nation and the civil rights movement of the 1960s.