The Marriage Portrait: A novel 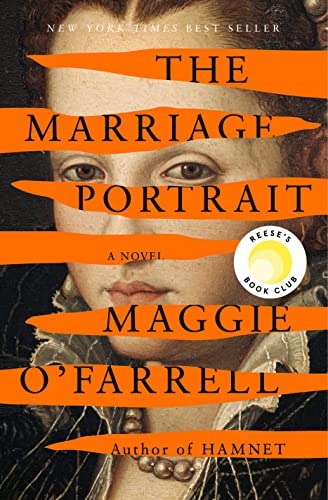 “Brilliantly conceived. . . . There are court intrigues, whispered rumors, a clever subplot about the power of painting, what it reveals as well as what it hides . . . As a story, pure and simple, the novel succeeds wildly.”

Maggie O’Farell wastes no time in her new historical book, this one about two Italian Renaissance families joining their fortunes through marriage. The bride is Lucrezia de’ Medici, daughter of the powerful Cosimo de’ Medici. The groom is Alfonso, duke of Ferrara. Lucrezia, Cosimo, and Alfonso all actually existed as did the marriage described here.

But the book doesn’t open with the celebratory wedding, nor even with the many negotiations at court that had to be finalized first. Instead, O’Farrell picks the most dramatic moment possible, giving a first paragraph that immediately plunges the reader into Lucrezia’s life—or rather into her death:

“Lucrezia is taking her seat at the long dining-table, which is polished to a watery gleam and spread with dishes, inverted cups, a woven circle of fir. Her husband is sitting down, not is his customary place at the opposite end but next to her, close enough that she could rest her head on his shoulder, should she wish; he is unfolding his napkin and straightening a knife and moving the candle towards them both when it comes to her with a peculiar clarity, as if some coloured glass had been put in front of her eyes, or perhaps removed from them, that he intends to kill her.”

The pages that follow bring us closer to that murder—will it happen or won’t it? And why? After introducing the idea of impending doom, O’Farrell takes us back to Lucrezia’s childhood. The rest of the book alternates between the past and the present, the days leading up to the opening scene where Lucrezia feels so acutely her husband’s true intentions.

The danger of such a conceit is that the childhood pages could feel tame, bland in comparison to the menacing present. O’Farrell masterfully makes each page incredibly vivid, bringing the reader into the life of the Medici court and then the Ferrara one. But since the main character is a girl, our world is as limited as hers is. We see the domestic, family life, not the political or larger cultural one. This could feel suffocating or boring in less capable hands. O’Farrell makes the story work through her incredibly rich descriptions, such as this one of a pivotal moment in Lucrezia’s young life when she looks out of her chamber windows and sees a new animal being delivered to her father’s menagerie:

“And then Lucrezia, hands gripping the windowsill, saw it: a lithe, sinuous shape, moving from one side of the cage to the other. The tigress didn’t so much pace as pour herself, as if her very essence was molten, simmering, like the ooze from a volcano. It was hard to distinguish the bars of the cage from the dark, repeating strips on the creature’s fur. The animal was orange, burnished gold, fire made flesh; she was power and anger, she was vicious and exquisite; she carried on her body the barred marks of a prison, as if she had been branded for exactly this, as if captivity had been her destiny all along.”

It’s a destiny that Lucrezia shares, first immured in her family palazzo where she can’t even leave her room without permission, then in Alfonso’s fortress. As wealthy and privileged as she is, a kitchen maid enjoys more freedom than Lucrezia does. Like the tiger, Lucrezia is power and anger, vicious and exquisite, and completely trapped.

There are court intrigues, whispered rumors, a clever subplot about the power of painting, what it reveals as well as what it hides. Through it all, O’Farrell brings us close to Lucrezia’s flinty intelligence, her inner strength. As a story, pure and simple, the novel succeeds wildly, placing us firmly into a specific time and place where Lucrezia’s drama plays out. The characters are subtle and intriguing, not simple caricatures. Even Alfonso, who could have been portrayed as a broad villain, is complicated, even sympathetic at times. The gripping narrative propels the action forward, each page taut, without a single wasted word.

It’s a powerful story, very loosely based on some historical events, but those who insist on historical accuracy will be disappointed. Beyond the bare facts that Lucrezia de’ Medici married Alfonso II of Ferrara at age 15 and died a year later, there is no information to support the other details of the narrative. Even the marriage portrait which is so central to the story didn’t exist as described.

There is indeed a painting of Lucrezia by Bronzino’s student, Allori—the one on the book’s cover—but it was commissioned by her brother before she left the family palazzo. Il Bastianino, the name of the artist in the novel, did work as a painter at that time but there’s no record of his having painted Lucrezia. Nor is there any painting of an Italian noblewoman of the period holding a paintbrush. The whole conceit of Lucrezia being a painter, as compelling as it feels through O’Farrell’s lovely language, doesn’t ring true for the period. Italian Renaissance women painters were rare to begin and those we know of all had fathers, brothers, or husbands who were artists. It’s especially difficult to fathom a noblewoman painting. Still these are historical quibbles.

The Lucrezia of the book may not accurately reflect the actual person, but she’s a compelling literary creation and the story that unfolds around her is no less powerful for being completely imagined by the author. In fact, in some ways, O’Farrell deserves even more credit for being able to conjure up this new Lucrezia so convincingly. She may not have really walked through the halls of the Medici palazzo, but she strides through the pages of this brilliantly conceived book.