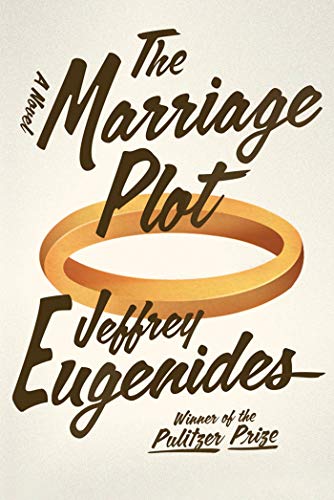 “Ultimately, The Marriage Plot is very much a moral tale while at the same time being a literary romp through 80s-style sex, love, and marriage. Both women who don’t hate themselves and men who like women will find it absorbing.”

A new novel by Jeffrey Eugenides is a big event, especially since the gap between each one is so long. It has been nine years since his Pulitzer Prize-winner Middlesex.

Mr. Eugenides begins The Marriage Plot in the middle of the story on the day of Madeleine Hannah’s graduation from Brown University: the day after her breakup with Leonard and the morning after the kind of night you can never tell your parents about.

Weaving between the past and present, as Madeleine totters through the day, hung over and avoiding said parents, the story brings us up to date on Madeleine’s love triangle.

But Madeleine loves Leonard. And Leonard is crazy.

Madeleine herself is an English major of gentle suburban upbringing. On the first page alone, no less than 11 authors are mentioned. She met Leonard in a semiotics seminar and her senior thesis is entitled “The Marriage Plot.” Clearly this is a novel for book lovers.

As the story continues, Mr. Eugenides moves around the triangle until we know all three characters about as well as you can know anyone. Because this author specializes in imbuing his protagonists with vivacity and charisma, he makes you want all three of them to get what they want—impossible as that may be.

Despite some weakness of plotting, The Marriage Plot burrows into your heart and mind. With quiet humor Mr. Eugenides satirizes the early 1980s and especially the semiotics era of literary instruction. “Reading a novel after reading semiotic theory was like jogging emptyhanded after jogging with hand weights.”

Is romantic love still relevant in modern times? Madeleine certainly hopes it is and does her best to follow its precepts while she struggles to maintain her sense of self.

Mr. Eugenides can be overly wordy; his prose is never flashy. Like a good friend telling an overlong story, he goes on and on, but the result is an immersion into a time, a place, and a big idea. Hermaphroditism was a big idea; romantic love is a bigger idea. Madeleine and her boyfriends however are not ideas. They are unique individuals newly graduated from college, each discovering how to turn their passions into a life that can be lived.

Ultimately, The Marriage Plot is very much a moral tale while at the same time being a literary romp through 80s-style sex, love, and marriage. Both women who don’t hate themselves and men who like women will find it absorbing.