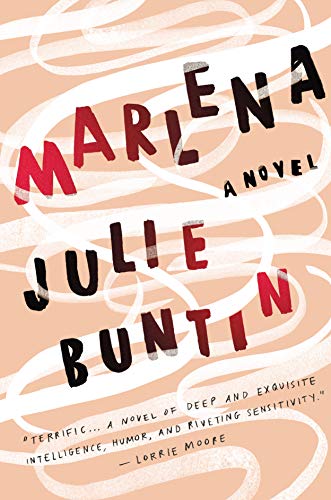 Marlena by Julie Buntin is a haunting debut that journeys back to a time of a tumultuous friendship between two teenage girls, Cat and Marlena, in the 90s. But only one will carry through to adulthood.

Cat, a lonely, studious, 15 year old moves to the rural northern Michigan town of Silver Lake, into a dismal house with her mother and older brother after her parents’ divorce.

There the teen meets up with the beautiful, wild, and troubled 17-year-old neighbor, Marlena, who introduces Cat to many firsts, including her first drink, first kiss, first drug, and the first of many dangers.

Cat describes Marlena as,  “. . . alarmingly pretty—sly, feline face, all cheekbone and blink—and if I am honest, that was the first reason I wanted to become friends.”

“We’re pretending to be girls with minor secrets,” Cat says of her friendship. Additionally, Cat’s new awakening around Marlena’s friends is honestly portrayed, “. . . I almost drew my elbow into my gut, my huzzah, like the nerdy girl I still was.  That was enough of Cat for one night. I didn’t want to push my luck.”

But the friendship begins to fracture when Marlena’s drug habits harden and her life spirals into bleak despair. Every day, Cat finds herself making sacrifices for the sake of the friendship, “. . . though they didn’t feel like sacrifices at the time, redefining myself according to who she was, until we became the perfect team . . .”

Despite the surrounding violence, sex, drugs, and parental abandonment, young Cat’s unshakeable belief is, “If I gave Marlena up, I’d be leaving something important with her forever, something of mine that I’d never get back.”

Within the year, Marlena is found drowned in the shallow, icy waters nearby.

Decades later, Marlena’s friendship and death still haunt Cat as she tries to carve out a life in NYC, embarking on a journey of self-discovery, and moving past the tragedy.

Cat’s thoughts on what a future best friend would include is tender and intelligent. “For so many women, the process of becoming requires two.”

Yet, for Cat, the stark reality is always unforgiving and unrelenting, “Every year, it happens the same way, Marlena dies, I get older.”

Marlena is a stunning debut, packed with authentic emotional reckonings, a fierceness delivered in unforgettable prose about friendship and the fragile bonds that bind us.