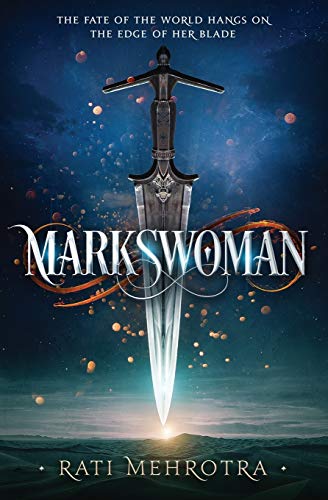 Markswoman introduces a bright new series to fantasy fiction. It’s a strong start, but it comes with a hitch.

The hitch is the fact it’s intended to be series. Anyone who heavily reads series knows that they can be structured in three ways:

1) like TV programs, with a lead character and troupe of supporting characters having a complete adventure in each episode, with potential to go on indefinitely;

2) like old-fashioned serials, with one long story divided into episodes that run sequentially, each ending in a cliffhanger; or

3) by splitting the difference, and having a lead character with supporting cast, and episodes that kinda sorta end an adventure but don’t quite close it, so you have to read the next volume(s) to find out what happens.

Markswoman is of the third type, and therein lies its weakness. The adventure launched in Book 1 contains so many threads that only one of them is concluded—barely—by the end of the book. The rest are left dangling, which the reader doesn’t anticipate until the number of pages left gets very thin between the fingers yet the climax has not yet occurred.

Then it’s siss-boom-bah—over, with no room left for dénouement. This abruptness leaves a sense of being manipulated by either the author or the publisher’s marketing department. Not a good way to close an otherwise enjoyable sword-and-sorcery tale.

In this tale, we have sentient blades psychically bonded to the Markswomen, who are keepers of the peace on Asiana through a structured society of Orders. The Orders arose after a Great War that decimated the world’s population and left much of the land poisoned. The survivors, having learned humanity’s harsh lessons, developed a system to keep evil in check and prevent destructive horrors from happening again. When the society’s rules are broken, Markswomen are dispatched to perform retribution.

Asiana seems at first to be a wholly fantasy world, but little clues pop up to suggest a postapocalyptic Earth, centuries in the future. Somewhere between contemporary times and story times, magic entered the world, perhaps through visiting aliens, or else human technology so advanced from what we know today that it seems like magic. Nobody on Asiana knows for sure.

The long-gone society left behind transportation portals that allow people to travel through time and across distance, albeit at risk. Some of these Hubs are reliable and easily accessible; others are hidden, locked, or don’t work predictably. The story’s main character, Kyra, a young Markswoman in serious trouble, uses them to her advantage and disadvantage.

Kyra is in trouble because she can’t quite live up to the ideals of her Order, harboring a secret lust to avenge her family. They were slaughtered when she was a child; and, having been adopted by the Order of Kali and raised to be an elite warrior—a Markswoman—she’s now in a position to execute her family’s executioners. Doing so without a direct command and Order-justified reason, however, is against the rules and bears severe penalty.

While she’s dealing with her internal conflict, her special abilities are cultivated by the Order’s benevolent leader, who is murdered by the second in command in a power play that will corrupt the Order. Only Kyra knows the truth behind the killing. This threatens the cruel usurper, who creates a situation from which Kyra must flee for her life.

That leads her to the only all-male Order on Asiana, considered inferior by the female Orders. The men train Kyra further in the fighting arts to have a chance to survive her challenge to the usurper in a duel to the death.

Among the Marksmen, Kyra has her first exposure to romantic love—one of the many

subplots spinning off from her adventures and relationships, which lead to the dangling-thread problem. The subplots require changes in narrative point of view, as well, giving the novel a choppy and unfinished feel.

Aside from this, the details of Asiana’s geography and culture combine to create a fresh spin on genre tropes, keeping the story engaging in spite of Kyra’s immaturity and assorted small logistical details that will irk technically oriented readers. For instance, the magic daggers, called katari, are carried in wooden scabbards, constantly worn by the Markswomen and Marksmen. One can’t help but wonder how much those stiff pointed things of unspecified dimension would get in the way, given all the running and fighting and riding everyone does without using the weapons, which are often concealed under clothing.

The narrative has a tendency to ignore the kataris until they’re wielded in dramatic moments. Their power is more often told about than shown, so readers don’t get a solid sense of the nature and potency of the kataris’ bonds to their humans. As well, the kataris’ sentience is inconsistently played, allowing them to be used in a deus ex machina manner. (Or the reverse—the katari being taken out of action at convenient plot moments.)

These aspects combine to enhance the unpolished feel of the book, leading one to hope that Book 2 will continue Kyra’s saga in a stronger technique. The story is intriguing enough that most readers of Book 1 will really want to know how everything turns out!