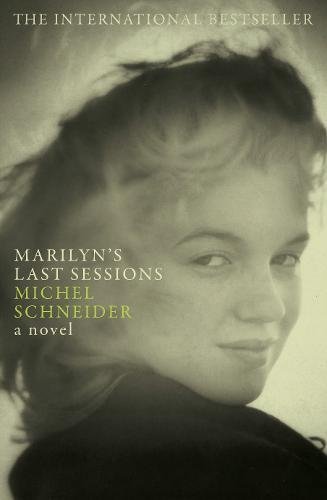 “. . . comes at you like Citizen Kane . . . And in this case the Rosebud is Marilyn herself—central to the narrative and yet slippery, elusive, just out of the frame—even as she is flickering in the flames.”

If Truman Capote busied himself inventing his “nonfiction novel” with In Cold Blood, then Mr. Schneider here creates a new mutation: a fictionalized, novelized, gussied up and glorified, somewhat dandified biography—of Marilyn Monroe yet.

While not seeking the same olive wreaths of literary glory that Capote did for his genre-defying exploits, Mr. Schneider admits to his game playing right up front:

“Like Marilyn’s hair, this novel is a phony of the bona-fide kind,” he starts, alluding to the star’s oft-repeated (via Truman Capote in Music for Chameleons) remark that even real blondes need a touch up now and again.

“It is inspired by actual events and, except where changes have been made to respect the privacy of the living, its characters appear under their real names. Locations are accurate, dates verified, and quotations from accounts, notes, letters, articles, conversations, books and films are the protagonists own.

“But it is a work of fiction. The forger in me hasn’t hesitated to impute to one person what another has said, seen or experienced, to ascribe to them a diary that hasn’t been found, articles or notes that have been invented, and dreams and thoughts for which there is no source.

“In telling this story, a loveless love story of two characters who became fatally embroiled in each other’s lives, my aim is not to find the truth, or probable truth, about Marilyn Monroe and her last analyst Ralph Greenson, but to observe a couple in the act of being themselves, and register their uncanniness as if it spoke to me of my own.”

In other words, we should not believe a word the guy says.

Like the forger he admits to being, in the pages of Marilyn’s Last Sessions the author creates verisimilitude. She looks like Norma Jeane, sounds like her, does the things that Norma Jeane would do, both in her Marilyn drag and out of it, and yet, she is, in the deepest reality, a fictional thing, something made up, a character named Marilyn in a “novel” created to explore her nature, and especially the nature of her relationship with her last therapist.

And has anyone’s nature—their innermost and outermost being—been as deeply explored or exploited as has Marilyn’s?

The premise may even sound a bit tired.

But I assure you, as a survivor of a multitude of works of Marilyn “scholarship,” big and small, smart and smug and repetitive and dumb, it is not. Mr. Schneider is onto something new here. He has found new vein of material in what has to be the most over-mined of topics. A new slant. He has done what Norman Mailer and Joyce Carol Oates did not, what Donald Spoto, Anthony Summers, Sarah Churchwell, Adam Victor, and myriad others apparently could not, and allows us to see the world, however briefly, through Marilyn’s eyes.

Until now, the best glimpse we have been given was in Capote’s aforementioned Chameleons, in which he presented an all-too-brief sketch (because it is a book of sketches, of half-finished things that he wrote when he had lost the ability to finish) of Marilyn in a piece called “A Beautiful Child.”

Mr. Schneider borrows from that sketch here. He swallows it whole and spits it out in chewed up pieces—a bit here, a bit there scattered throughout his text. Even the bit about the blondes needing their hair touched up in the opening of his book is straight out of Capote:

Compare this, from Marilyn’s Last Sessions, page one:

“TC: ‘Poor innocent me. And all this time I thought you were a bona-fide blonde.’

“MARILYN: “I am. But nobody’s that natural. And, incidentally, fuck you.’”

To this, from “A Beautiful Child” in Music for Chameleons, page two hundred and twenty-nine:

“TC: ‘Poor innocent me. And all this time I thought you were a bona-fide blonde.’

“MARILYN: ‘I am. But nobody’s that natural. And incidentally, fuck you.’”

It’s concerning, frankly, the fact that the two are but an italicized word away from having been cloned.

In a biography, of course, the quote would be attributed. But here, in this shadowland between fact and fiction, between full-out biography and fully realized, unrestricted art, there is only a list of “Further Reading” at the back of the book and a brief note of thanks to the Capote literary estate for the use of the material.

And thus the forger shows his art.

Those of us who have read the full canon of works on the late actress will notice myriad examples of this, of the insights and illustrative anecdotes lifted from here, recreated from there, turning up all over the place in this work, like raisins in a carrot cake.

And yet the whole of the thing is unique. Maybe even magnificent. And it makes for an immersing, fascinating read.

As I said, I have never in any other book felt I knew the character (and we must, for the sake of this work and its artistic conceit, refer to her as a character, and ignore as best we can the fact that she once existed) called Marilyn as well as I did while reading this work.

To say nothing of Mr. Schneider’s wordsmanship. Which identifies him as not only a forger but also a magician:

“To fans, the Hollywood Walk of Fame stretches down Hollywood Boulevard and Vine Street like a dazzling trail across a starlit sky, a triumphal procession through the history of movie making. The star with Marilyn’s name above the bronze camera is set in the reddish-brown concrete just outside the McDonald’s at 6774 Hollywood Boulevard, not far from Grauman’s Chinese Theater where she’d spent whole afternoons as a child, on her own or with Grace McKee, losing and finding herself in the darkness.

“Just opposite, number 7000, is the Hollywood Roosevelt Hotel, which hosted the first Academy Awards dinner two years after it opened in 1927. Marilyn posed by its swimming pool when she was twenty-five, and often stayed there in the 1950s, in Suite 1200. The contempt her fame excited still came as a surprise back then: ‘It stirs up envy, fame does,’ she told Greenson. ‘People you run into feel that, well, who is she? Who does she think she is, Marilyn Monroe? They feel fame gives them some kind of privilege to walk up to you and say anything to you, you know, of any kind of nature and it won’t hurt your feelings. Like it’s happening to your clothes.”

Marilyn’s Last Sessions comes at you like Citizen Kane, its narrative broken into bits, a thousand witnesses all speaking at once, all withholding what they can. And in this case the Rosebud is Marilyn herself—central to the narrative and yet slippery, elusive, just out of the frame—even as she is flickering in the flames.