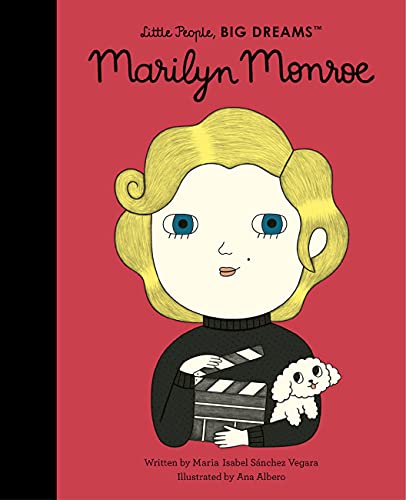 Marilyn Monroe (Little People, BIG DREAMS) introduces a young child (ages 4–7) to Marilyn Monroe. “Once, in the city of Los Angeles, there was a little girl with lots of love to give. Her name was Norma Jeane.”

She started her life out in foster homes and orphanages because her mother was sick. She went to the movies as a foster child. She married her neighbor when she was 16 so that he wouldn’t have to leave California (her foster family was moving).

Norma Jeane was a Rosie the Riveter during the war, where a photographer discovered her. She became a model after that. She dyed her hair blond, changed her name, and tried out to be an actress, eventually getting hired by a movie studio (not explained in the book). She was hired but didn’t get a real part for six months. She avoided a scandal when America found out she had posed “with very little clothes on for a calendar.” She told the truth, and America forgave her. All About Eve was her breakout role. She started her own motion picture company.

Marilyn was still lonely, so she agreed to entertain the troops overseas. She starred in more than 20 movies. The rest of her story is left out since it’s a book for kids.

There is a timeline at the end of the book called Facts and Photos.

The art is simple with many bright colors on solid colorful backgrounds of gray, pale blue, yellow, but no white. The faces are flat with big eyes and simple bodies. The end papers are pale blue with yellow stars on them.

The book is cheerful as it glosses over the sad parts of Marilyn’s life: her many marriages, her drug ad alcohol problems, and her drug overdose and death at 36.

Anyone who likes a story of how a foster kid becomes a successful movie star who just wanted to be loved this is the story for them.