Marilyn in Manhattan: Her Year of Joy 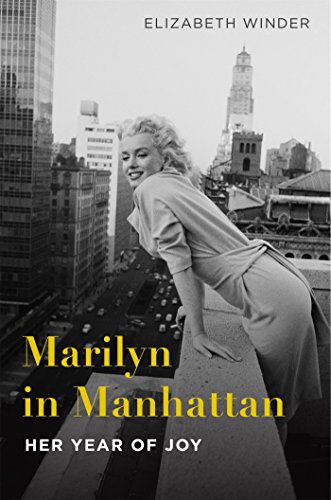 “one of the best books to come out in many months.”

The premise of Marilyn in Manhattan, as defined in the opening paragraph, is so good that it sells the book all by itself:

“In late November 1954, a woman who identified herself as Zelda Zonk drove quietly to the LAX airport and boarded the evening’s last plane to New York. Accompanied by a young photographer named Milton Greene, the woman wore no makeup, a man’s oxford shirt, and Jax cigarette pants under a full-length black mink. She wore a black wig cut in a blunt pageboy and, though it was nearly midnight, black Wayfarers. She lit cigarettes and bit her nails like any other jittery twenty-eight-year-old about to jettison marriage, home, and career in the course of one midnight flight. Soothed by the revving engine, she slipped off the wig, revealing a tangle of fluffy blonde curls.

“She was Marilyn Monroe.”

There is genius at work in Elizabeth Winder’s new book, Marilyn in Manhattan: Her Year of Joy.

Choosing to write about two so very written-about women as Monroe and Plath is daring enough, but Winder goes a step further:  in each case she isolates a brief moment in her subject’s life, one in which New York City cocoons them, instructs them, and allows them to transform themselves from what they once were into the thing they would become. More than Los Angeles and London respectively, the time of the Manhattan idyll would offer each a period of self-reflection and self-discovery that would never be replicated.

For Sylvia Plath, it’s the summer of 1953, when the poet won an internship with Mademoiselle Magazine. (Plath would later turn her New York experience into the basis for her sole novel, The Bell Jar.)

For Marilyn Monroe, it’s the whole of 1955, a year that would allow the most famous actress in the world a moment in which she was able to step out of the spotlight (She had completed The Seven Year Itch before leaving Hollywood, but it would not open for months yet.) and to concentrate on figuring out what it was she actually wanted, both in terms of her career (she would, with Milton Greene’s help, establish her own movie production company and, however briefly, take charge of her career) and her personal life (she would trade baseball player Joe DiMaggio for playwright Arthur Miller, the snake), and to live for the first time as the person she was:  a young woman in her twenties, who wanted to study, drink, dance until dawn, and, more than anything else, have control over her own life.

Behind her were two bad marriages and endless battles with Fox Studios over scripts, directors and, to use a term that had yet to be invented, branding.

Ahead of her was the pinnacle of her career, as exemplified by the 28-foot cutout of the actress raised over the movie theater that premiered her film, a poster of her standing over a subway grate, her white halter dress billowing around her as she ooooo-ed with delight.

These are the months in between the midnight flight and the mind-bobbling success, when Marilyn Monroe lived in hotel rooms, started psychotherapy, joined the Actor’s Studio, and danced the night away with Truman Capote. These are, most assuredly, the months in which she was most free, most casual, most herself—and that makes Marilyn in Manhattan a very different sort of Monroe biography, because the girl written about here is a very different sort of Marilyn.  One who is vibrant, even happy.

The palpable joy found on these pages is one of two characteristics that makes this book the success it is.

The other characteristic that sets this book apart has to do with how wonderfully well written it is.

Elizabeth Winder writes skillfully enough that not only Marilyn comes alive in a way she has never before in any other of the myriad biographies already in print, but New York City itself is rendered in the post-war lushness of a Technicolor film. Marilyn and New York stroll lovingly hand-in-hand throughout the pages of the book.

“Marilyn looked particularly beautiful in those first months of 1955, her tousled locks skimming her chocolate collar, her skin iridescent against the city’s gray matte. She cut a stark hourglass figure in fitted cashmere—and for once her figure looked elegant, not exaggerated. Cars screeched to a halt on the curb. Somewhere on 54th street a Checker cab crashed into the back of a delivery truck, its dazed driver grinning out the window: ‘Marilyn!’”

The girl in this book is one we all want to have known.

We want to have been at the Actor’s Studio on the day she did her scene work from Anna Christie with Maureen Stapleton.

We want to be one of those teenaged girls and boys standing outside the Gladstone Hotel, waiting for Marilyn to come out, knowing that she will take time to talk to us, take pictures with us, and make us feel, for those moments, as happy as she seemed to be.

And we want to be invited to one of her rare dinner parties after she moved on to a flat on Sutton Place, like the one during the holiday season of 1955 when she was so excited about the decorations and the wine that she forgot all about the food.

Not having had the chance to experience any of these things along with Marilyn, this book is the next best thing. It is just gossipy enough, and its author, through some magic act, seems always to be able to describe in any given moment, large or small, exactly what Marilyn Monroe was wearing.

Like the best novelists, Elizabeth Winder understands the importance of details. Not just details that are strewn about like numbers in a tax return, but the telling details that can crack open the reader’s imagination. Like this moment, one in which Marilyn is homesick for Los Angeles:

“Still, there was something raw and lovely about Los Angeles—the lights twinkling over Catalina Island, West Hollywood’s scent of overripe flower pulp, amphetamine, and exhaust fuel. Departures crash into you with spiky intensity, throwing daily mundanities into high relief. Suddenly the ding of an elevator, the glint of a teaspoon on a room service tray, or the last snack you buy at your favorite bodega moves you to tears and you’re flung into nostalgia for a place you haven’t left yet and didn’t even think you could miss.”

There are so many major one-liners here that it boggles the mind. Like this one:

“Marilyn unbuttoned her coat, the scent of her perfume mixing with newsprint, street hot dogs, petrol and tire rubber.”

“The black Danskins came out again, and she undulated in them like a gorgeous otter.”

Or this, describing the members of the Actor’s Studio, as Marilyn first saw them:

In considering the men in her life, Windham is insightful to the point of ruthlessness:

“For the entire ten years that Arthur [Miller] knew Marilyn, he was running—away from her, toward her, but always running, and running for his life.”

And finally, this, a summation of Marilyn’s marriage to Joe DiMaggio:

“Here was a man who’d fly across the country when she twisted her foot yet wouldn’t talk to her at dinner.”

The point is this: Marilyn in Manhattan is so well written that it makes its reader giddy. It is impeccably researched, perfectly paced, and filled with a vibrancy that is almost missing in terms of modern fiction, to say nothing of biography. It is, quite honestly, one of the best books to come out in many months.

Except for the fact that our young author makes a very honest mistake in not knowing when to quit.

By chapter 15, “Cherie,” 1955 is coming to a close. And Marilyn’s miracle year is endng as well. With the success of The Seven Year Itch, Fox has had to fold. They needed their star more than they needed to succeed in breaking her. She won nearly everything she had held out for. Further, with the help of Tennessee Williams’ agent, Audrey Wood, she had found the property that she would first produce in the Broadway play Bus Stop and would go back to Hollywood ready to play a part she truly wanted, with her Actor’s Studio Method training to help her tackle the part of Cherie.

As Elizabeth Winder tells the tale, the sun shone brightly on New Year’s Eve 1955. And Marilyn’s friends gathered in Sutton Place to celebrate. As the author puts it:

Which is everything that anyone could want on New Year’s Eve.

Now, surely the book should have ended there, people shouting and giggling, glasses clinking, in freeze frame.

For some reason our author decided to add two more chapters that illustrate how things fell apart, and how Marilyn ended up back in Hollywood’s thrall, and broken hearted after Arthur Miller showed himself to be the utterly creepy bastard he always was.

I mean, we all know about what happened to Marilyn a few years later.  How young she was when she suddenly died by suicide/murder/accident.

Couldn’t this one book have ended at a moment of triumph? The rest could have been epilogue, if it had to be published in these pages at all.

Couldn’t a book subtitled Her Year of Joy have ended in whoops, if only in order to fulfill its titular mission—and be satisfied show what this woman was capable of being when, during her best weeks, she became her best possible self?