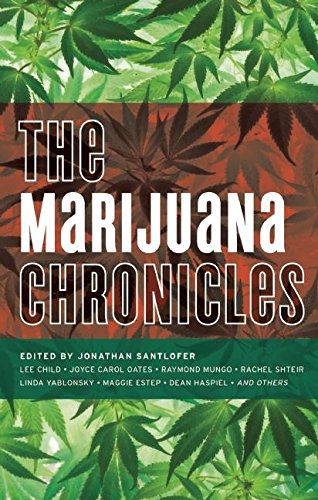 Coming on the hells of its critically acclaimed Noir Series of books, Akashic Books has now turned its eyes to other shades of human darkness and enlightenment, depending upon your viewpoint: Akashic Drug Chronicles Series.

The first titles in the series, The Speed Chronicles, The Cocaine Chronicles, and The Heroin Chronicles have now been followed by The Marijuana Chronicles, a look at one of the most popular and debated drugs of all time.

The book is sliced into four parts: Dangerous, Delirium & Hallucination, Recreation & Education, and lastly Good & Bad Medicine. Illustrations—for the most part—are by editor and award-winning author Jonathan Santlofer, who also contributes his own story, “The Last Toke.”

With such an abundance of talent on board for this series it is difficult to crown a winner, and rightly so. However, my own personal favorite is “Jimmy O’Brien” by Linda Yablonsky, a poignant, almost noirish story of sex, guns, love and, of course, drugs:

“Over the winter of 1980, I caught hepatitis and had to stay home for a month. No drinking, the doctor said. He didn’t say anything about smoking pot.

“If your thinking tends towards the dark side even when life is sunny, hepatitis can feel like the end of the world. You can’t get out of bed. You read depressing books. No one wants to come near you. Not that you want anyone to see you with a pimpled yellow complexion and jaundiced eyes. Then there’s the bloat of your belly. That alone can make you want to die.”

Thankfully for our protagonist she has a savior: a criminally handsome Adonis known as Jimmy O’Brien, macho to the bone in more ways than one, it would seem. Jimmy is also a lover of guns and the violence they command. Sex is high on his agenda. Very high.

Yet despite his outward rock-hard exterior, Jimmy is harboring a very dark secret known to no one. That is until one night when he proudly reveals all to our protagonist, who gets more than she bargained for—a hell of a lot more. . . .

Some of the classic quotes provided in The Marijuana Chronicles are outrageous, brilliant, or just downright out-of-this-world hilarious: Arnold Schwarzenegger: “This is not a drug, it’s a leaf.” Or this from Thomas Jefferson: “Some of my finest hours have been spent on my back veranda, smoking hemp and observing as far as my eye can see.”

Obama and Clinton are quoted, along with Jay Leno and Stephen King, to name a few willing to share their wisdom and experience with us.

If you are a fence-sitter on the passionately contested pros and cons of marijuana use, after reading this terrific collection you will find yourself falling off and landing on one side of the hothouse argument. Which side? That is for the reader to decide.

Akashic Books is to be commended for bringing this eye-opening series to a wider audience. Fresh and informative The Marijuana Chronicles is a gem. Highly recommended.