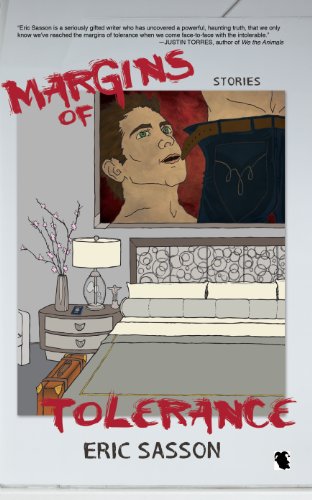 “. . . undeniably a talented writer, Mr. Sasson’s stories differ wildly in quality from the excellent . . . to the melodramatic . . .”

The issue with the stories contained within Eric Sasson’s new collection is one of consistency.

While he is undeniably a talented writer, Mr. Sasson’s stories differ wildly in quality from the excellent “That Perfect Poison”—sadly hidden away in the back of the book—to the melodramatic and hemhawing of the title story, “Margins of Tolerance” preceding “Poison” like a tight end precedes a quarterback.

In one of the collection’s best stories, “Remains of a Once Great Civilization,” Mr. Sasson blends several topics, travel, and changes in the varied outlooks of different cultures. As well, he explores the ways in which the gay “lifestyle” has evolved and/or matured in the last generation.

Tolerance, therefore, may be said to be the overall theme here. From story to story, the author explores the various ways we tolerate or fail to tolerate one another.

But with Tolerance being Acceptance’s ugly stepsister, the stories as a group seem to aim too low.
And the author seems as often in search of a podium as he does a narrative.

Thus, too many stories are written as if the plot were contrived as a means to an end—a means by which Mr. Sasson can point out man’s inhumanity to man, or, more specifically, to gay man. Which is not to say that the author doesn’t have a valid viewpoint, simply the author’s viewpoint ought to have been more artfully presented.

On the surface, they seem the ideal couple living an ideal life with Parker commuting to The City and his high paying job every day, while Chase stays home and paints in his art studio.

But scratch the surface and you see the couple for what they are: paper-thin creations in Mr. Sasson’s exploration of the state of the gay union today.

The story begins with Chase’s remembrance:

“We used to have sex on the dining table. We used to drop to our knees in the kitchen, fuck like convicts against the bathroom walls. The curtains of our apartment in Chelsea would be only half-drawn in whatever room we were in, a mocking gesture to modesty. It made Parker hot to think one of our neighbors might be watching.”

“It was Saturday night,” Chase laments, “and we were retouching paint on the molding.”

In the first few pages of his short fiction, Mr. Sasson nicely establishes the friction, and the reader watches the interplay of the concept of “gay man” of a generation ago—sexual outlaw, untamed, wanton—with the LGBTQ man of today—married with children, suburban, settled.

With the nature of relationships evolving along with the status of the gay community within the overall culture, Mr. Sasson explores what has been lost as well as what has been gained, and apparently the gains fall short.

Into the mix of his tale, Mr. Sasson adds neighbors from central casting:

“Later that day, Barbra and Stan appeared on our doorstep. We had waved hello to them a few times before, when we had come to take measurements on weekends. Stan was a hulking man, certainly a football player in his day. He shook hands vigorously and his smile was warm and mellow. Barbra was a bit harder to appraise. She was tall and thin, her sunken, dark eyes both probing and uncertain, as it they bored deep into your soul but weren’t sure what they saw there.

“She had a bottle of Merlot in her hand, which she handed to Parker. ‘It’s not a pie,’ she said. ‘But then again, this isn’t Georgia.’”

Streisand-tribute spelling of “Barbra” aside, the struggle for the reader is to, in reading the text, imbue it with something other than the hamfisted writing on the page.

“Parker even stopped by the local Episcopal church and picked up a flyer about an upcoming bake-off.”

“I had unwrapped a recent work, a painting I jokingly entitled When Hell Freezes Over, a Chagallesque collage that included, among other scenes, a female priest presiding over a wedding of two male rabbis. I wanted to set it above the fireplace . . .

“‘Maybe we should change things up a bit,’ Parker said. ‘New house and all. Plus wouldn’t ‘Midnight Picture Show’ look better with the Nakashima bench and the womb chair?’

“’Of course.’ Parker reached for my shoulder and kissed my cheek. “Mine too. I just thought it would showcase better in the study. Much softer lighting in there.’”

It couldn’t be more obvious if Parker had fallen asleep next to a large green space pod, apparently. And by the time the guys have dinner with Barbra and Stan, bringing a rhubarb cheesecake and a bottle of Prosecco with them, meeting as well the couple’s is-he-or-is-he-not-gay teenage son Dylan, the reader has managed to jump way ahead of the writer as the sound of the theme from the movie Jaws grows louder and louder in the reader’s mind.

Suffice to say, things fall apart. The center cannot hold, not even with soft lighting and a Nakashima bench in it.

Ah, but when Eric Sasson writes about writers writing and the intricacies of the writer’s conference—the sudden loves, the gay groping, the backbiting, eyes blinking back the tears—the man comes into his own. And thus “That Perfect Poison” stands as the yang to the “Tolerance’s” sappy yin.

Other tales crackle as well. The beautifully ethereal “Floating,” which turns the viewpoint of Sasson’s usual narrative—gay American travels to another country to encounter new cultures and the same old gay aches and pains—inside out, the visitor seen through the eyes of the native, an innkeeper who watches the flagrant comings and goings of his paying guest—and that guest’s various guests—with a mixture of emotions. It’s a lovely thing, “Floating:” evocative, gossamer, and beautifully wrought.

Ditto “Dear Guy in 24B,” a comic tidbit in which the guy in 23A carries on both sides of a seductive conversation with mixed results. And “Body and Mind,” a tale that may at long last bring Grindr to the masses.

There is no doubt that Eric Sasson is a writer with talent, passion, and a sense of global exploration that will allow him an ever-expanding circle of locales.

But Mr. Sasson is young yet, his talent still ripening. And so the reader cannot help but wish that he had waited a handful of years before this collection was published so that some of the weaker stories included here could have been replaced with those richer, deeper tales that he has yet to write.