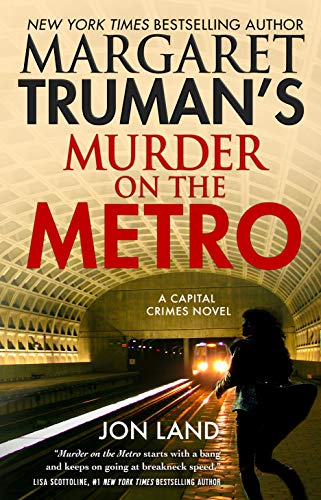 “As all good mysteries, and especially thrillers, move toward the end, there is an exciting scene that concludes in a race between good and evil, and although we all know who wins in the end, it’s the getting there that spells the difference between a page turner and a shelf sitter.”

Three events, three people, three places. This is how Jon Land starts Murder on the Metro and he ingeniously takes the threads of each and weaves them together into a fascinating thriller that is hard to put down.

The story starts at the beach at Caesarea Israel where Lia Ganz, retired Mossad Colonel, is enjoying a relaxing day with her granddaughter, when the unthinkable happens. Several drones pass over the beach, firing at the citizens who are doing nothing more than enjoying a warm day in the sun. Lia knows this act must be avenged, but where to start?

Land moves the story to Washington, DC, where Secret Service agent Kendra Rendine, assigned to the security of Vice President Stephanie Davenport, realizes there is something wrong, but is too late when she discovers the vice president has died of a heart attack. And yet something nags at Kendra; something isn’t right.

And finally, Robert Brixton, previously with “the shadowy Strategic Intelligence Tasking group, or SITQUAL, . . .” now an independent operator, finds himself on the DC Metro, sitting across from a young Muslim girl. Their eyes meet, and Robert recognizes the signs. She rises to move, and he follows and with every step he becomes more aware . . . she is a suicide bomber. She makes it just outside the door separating the cars when everything goes wrong.

These are the scenarios Jon Land sets out—no relationship between them until he takes those threads and tightens them into an exciting thriller.

Land’s writing style is clear. He understands mysteries and thrillers and how to put them together to keep the reader reading! To pull these three stories together, Land produces short, tight chapters, most no longer than two or three pages, and each ending with a question for the reader; a question that requires moving to the next chapter.

Each of his primary protagonist characters have connections to one another, although not always close, but connections, nonetheless. And each brings his or her own skills to the task, skills that compliment the small group as they discover the relationship between each of these events.

But what about the antagonists? Land takes it to the highest offices in the country and almost like a Columbo episode, introduces the antagonists to the reader. The question then becomes what, exactly, are these people planning?

One side note, fascinating characters in the form of Sister Mary Alice Rose and a murky “professor” add answers to the research our three heroes conduct.

Murder on the Metro is strong on tension and conflict. As the story moves forward, Land lays the groundwork for the heroes to uncover the horrific facts, while the antagonists, knowing who these people are and what they are doing to prevent a tragedy of biblical proportions, throw blocks in their way up to and including murder.

As all good mysteries, and especially thrillers, move toward the end, there is an exciting scene that concludes in a race between good and evil, and although we all know who wins in the end, it’s the getting there that spells the difference between a page turner and a shelf sitter.

This one is not a shelf sitter.

If there were any downside to the story, it could be the wrap-up, where a few loose ends are not tied up tight, but on the whole, the story is well put together, the characters are three dimensional, the tension is strong, and the story is believable.