Margaret Thatcher: From Grantham to the Falklands 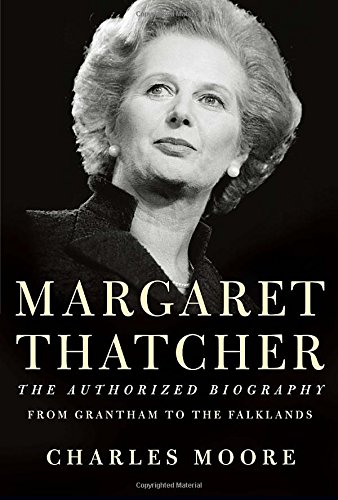 “. . . fittingly sum[s] up the public and the private face of Thatcher.”

Arguably the most divisive British politician of the 20th century, Margaret Thatcher was still provoking controversy in death, with a nation steeped in contention and either drying a tear during the $5 million ceremonial funeral or leaping about in ruby slippers chanting “Ding dong, the witch is dead.”

Mr Moore’s first volume of his biography of the late British prime minister is a weighty tome in every sense of the word. With the agreement that neither Mrs Thatcher nor the Cabinet Office would influence or suppress his work, which would be published only after Mrs Thatcher’s death, the author enjoyed unprecedented access to the prolific documentation and the numerous “insiders” she had accumulated over a lifetime in politics.

One might also imagine some of the interviewees divulged their views with more candor in the knowledge that Mrs Thatcher would never be privy to their comments. Yet it is the private papers, particularly the early letters to her sister Muriel, that give us a unique insight into the formative years of Britain’s first woman prime minister.

A grocer’s daughter, Margaret Roberts was born in 1925 and grew up living above the shop that straddled both the wealthier and poorer districts of the northern town of Grantham. Her charitable father, Alfred Roberts, was a Methodist preacher in the local church, and his daughter was raised to understand duty, to God, and to her fellow man—at that time, the shop’s customers.

Later in life, Thatcher recalled a widow in black entering the shop with two small children and “requesting three small oranges for the price of two because she had to be so careful.” S

he would use experiences like this to insist she had a “connection” with ordinary people: “Life was not something we did not know about. We were right in it.” Indeed, throughout her life she would be known for her dislike of waste and her determination to hold on tight to the purse-strings, whether public or her own private finances.

Though she was greatly influenced by her politically minded father, her sibling Muriel’s view was that her sister quickly grew apart from their mother Beatrice, whom Muriel described as “a bigoted Methodist.”

When Thatcher gained—by default—a place at Oxford University, she “vaulted into another world,” albeit apprehensively as she had never spent more than a few days away from home before.

Later she was to be described by a fellow member of the Oxford University as a “rather humourless mouse;” and while Thatcher’s sense of humor has often been cited as MIA, it is quite possible this observation was made out of resentment at her later success in life.

Whether readers pick up this book to learn more of the politics of Thatcher’s Britain, or more of the woman—the wife to Dennis and mother to twins Mark and Carol—they will find Mr Moore’s account is painstakingly detailed with footnotes that often provide a light, and entertaining distraction from the more formal text.

The book meticulously charts the road to political success that saw Thatcher crash through the glass ceiling of the male dominated world of British politics. And there are certain to be more insightful observations to come, as this volume concludes with the end of the war in the Falklands.

Mr Moore’s final paragraph seems to fittingly sum up the public and the private face of Thatcher. It concerns a dinner she gave at Number 10 Downing Street to mark the end of the war. She was the only woman present as most of the key players in the war had been men, and with so many invited guests there was no room for wives at the table.

Mr Moore explains: “After the toasts . . . The Prime Minister rose in her seat again and said ‘Gentlemen, shall we join the ladies?’” He then adds: “It may well have been the happiest moment of her life.”