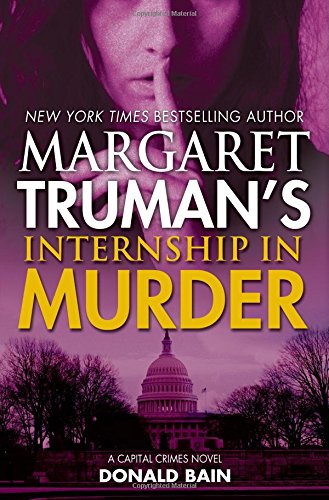 Donald Bain has picked up the mantle of Margaret Truman’s Washington, DC, based mysteries and does her proud. His authorship of Margaret Truman’s Internship in Murder is a quick read for mystery buffs who like a lot of twists and turns to their stories but do not want the story to go off track.

As with Truman’s mysteries, Internship in Murder is set in Washington, DC, with all of its behind-the-scenes maneuverings by high-end politicians, lawyers, and private eyes, while also dipping into the seamier side of life with hired killers.

The tale starts with Laura Bennett, a young, precocious, 21 year old fresh out of college who takes a job as an intern for Congressman Hal Gannon, a mover and shaker. Laura’s father is a major fundraiser for Gannon and pulls the right strings to get his daughter a plumb job.

It does not take long before Laura and the Congressman enter into a sexual relationship that she puts more thought into than he does. A married man with big plans looming in his future, and a wife who prefers Tampa, FL, to Washington, DC, Gannon can’t seem to refrain from bedding any attractive woman who comes his way, and that is his downfall. He regales his conquests with fantasies about his upcoming divorce, and as he anticipates, they believe him and return to his bed thinking they will be the next Mrs. Gannon.

When Laura realizes that his promises are empty, she threatens to go public with their affair, and with that threat, she disappears, and shortly is found bludgeoned to death in a DC cemetery.

Her father hires a high-end lawyer, Mackenzie Smith, and a recommended PI, Robert Brixton, to find out what happened to Laura, determine who was responsible, and bring that person(s) to justice. At this point, Brixton becomes the official sleuth/protagonist and proceeds to uncover bits and pieces of the puzzle.

As with most good mysteries, there is more than just one murder, but not so many as to confuse the reader. Two murders, two attempted murders, and one police standoff before the ending is wrapped up neatly and the guilty party is revealed.

Bain’s history with authoring a number of Murder, She Wrote novels reflects on this book. The story is not a hard-core thriller and the characters are well developed, but also not hard core. He injects some light-hearted humor that one is used to in the Murder, She Wrote TV programs.

Bain is very good at laying out all of the clues the reader needs to solve the puzzle and determine who is behind the crimes, but does not give away so much that the reader identifies the guilty party before Brixton puts it all together. He designs a good race between the sleuth and the reader, but always keeps the sleuth just one step ahead.

The story is well designed, not so confusing that the reader won’t remember it if they put the book down for a day. Get the book; share it with your friends. It’s worth the read.