The Return of Marco Polo's World: War, Strategy, and American Interests in the Twenty-first Century 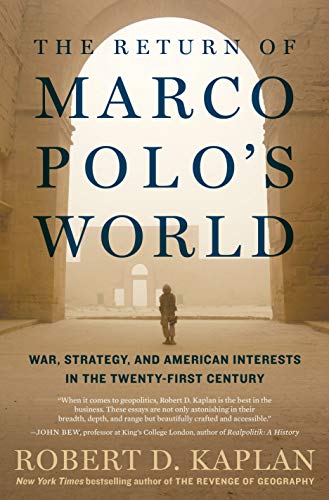 The German political geographer Friedrich Ratzel held that “great statesmen have never lacked a feeling for geography.” “When one speaks of a healthy political instinct,” he wrote, “one usually means a correct evaluation of the geographic bases of political power.”

Modern classical geopolitical thought dates from the late 19th century when the world, in the words of British geographer Halford Mackinder, became a “closed political system.” The territorial discoveries of the “Columbian epoch,” he noted, were complete.

Robert D. Kaplan, in a series of books and articles—most notably, Monsoon, Asia’s Cauldron, and The Revenge of Geography—has compellingly applied and updated classical geopolitics to current international relations. His latest book, The Return of Marco Polo’s World, is a collection of articles written between 2001 and the present that combines elegant writing with a masterful grasp of global geopolitical realities.

The lead essay, “The Return of Marco Polo’s World,” was originally written for the Pentagon’s Office of Net Assessment in 2016, and was later published by the Center for a New American Security. Henry Kissinger has called it a “seminal work” of geopolitical analysis.

What Kaplan calls the end of the “Long European War of 1914–1989” resulted in the dissolution of Europe as a geopolitical region and its unification with the “supercontinent” of Eurasia. Moreover, the interaction of technology, geopolitics, and globalization has brought to fruition Mackinder’s concept of the “World-Island”—the combined Eurasian-African landmass. “Who controls the World-Island,” Mackinder warned, “commands the world.”

As technology and globalization make the world smaller, Kaplan writes, “every part of the earth is now increasingly interwoven with every other part.” Here, Kaplan echoes Mackinder’s observation in Democratic Ideals and Reality (1919) that “[e]very shock, every disaster or superfluity, is now felt even in the antipodes . . . [and] [e]very deed of humanity will henceforth be echoed and re-echoed in like manner round the world.”

Kaplan views China’s Silk Road policy toward Central Asia and Europe, and its development of a maritime network involving the Pacific Rim, the Indian Ocean, and the Middle East (the land and maritime routes that Marco Polo traveled in the 13th century) as an effort to attain political primacy on the World-Island. Twenty-first century geopolitics will be defined by how other Eurasian powers and the United States respond to China’s moves.

During the “Long European War,” U.S. national security policy sought to prevent the political consolidation of the key power centers of Eurasia by a hostile power or coalition of powers. This in essence was the geopolitics underlying the First World War, Second World War, and the Cold War.

That same U.S. geopolitical imperative applies to the 21st century. China potentially replaces Imperial and Nazi Germany and the Soviet Union. Her pressure on Central Asia and the spread of her maritime influence in the Western Pacific and the Indian Ocean threatens to diminish U.S. predominance in the coastal regions of Eurasia—what Spykman called the Eurasian Rimland.

Kaplan believes that American security can be maintained by investing in sea and air power to ensure U.S. command of the sea in the Eastern Hemisphere. “Here,” Kaplan writes, “is where the ideas of Alfred Thayer Mahan meet those of Halford Mackinder.”

In the book’s other essays, Kaplan manifests a preference for prudent realism in U.S. foreign policy. He lauds the heroism and courage of American servicemen from Vietnam to Iraq and Afghanistan, but questions the wisdom of our statesmen for investing precious and limited resources in seemingly neverending peripheral conflicts.

He praises the foreign policy realism of Presidents Eisenhower, Nixon, Reagan, and George H. W. Bush, and the scholarly realism of Hans Morgenthau, Henry Kissinger, Samuel Huntington, and John Mearsheimer. They all exhibited (and exhibit) a sense and knowledge of history “rooted in a mature sense of the tragic.”

Realists understand, notes Kaplan, that in an anarchic world of states order precedes freedom and interests trump values. Utopianism can be dangerous and costly. History is not linear. Progress is not inevitable. Nations, as Thucydides noted long ago, still act based on fear, honor, and interests. Prudence and a sense of limits define good statesmanship.

Kaplan, like Kissinger, understands that idealism has always influenced American foreign policy. His latest book will hopefully help American policymakers to, in Mackinder’s words, “adjust our ideals of freedom to [the] lasting realities of our earthly home.”