Marching to the Drums: A History of Military Drums and Drummers 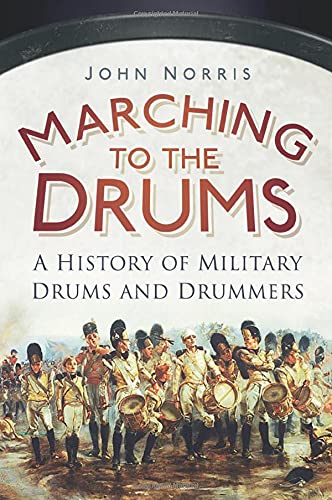 “. . . a welcome and interesting work that adds depth and perspective to not only the history of the drum, but military history as well.”

The role of military drummers and the drum plays a greater role in military history than many readers might expect.

Not that they have directly changed the course of history in a manner similar to other developments such as gunpowder or the railroad, but the use of drums in militaries remains significant. This topic is the subject of an interesting and comprehensive new work by John Norris, a military journalist and former member of the British Grenadier Guards.

Through the course of 14 chapters, averaging eight pages each, Mr. Norris covers a great deal of ground quickly.

The first three chapters focus on the use of drums for military purposes across many major cultures including Aztec and Chinese societies where the tlalpanhuehuetl and taigu drums, respectively, were used. This interesting background then focuses readers on drums used by Islamic armies during the time of the Crusades.

The mid-13th century Battle of Mansura during the Seventh Crusade is one early example of the Muslim army's use of drums that is cited by Mr. Norris. In this battle, the drums powerfully impressed and intimidated French knights to their detriment and eventual defeat. This intriguing case demonstrated Islamic drummers' use of a form of kettledrums, called Nakers, as psychological warfare that also served as a means of communication amongst Islamic troops.

Although almost certainly known about in Europe, drums did not appear an important part of the European military system at the time, at least according to the Bayeaux Tapestry which omitted drums in its recounting of the Norman Conquest of Britain in 1066.

From the Crusades and the European appropriation of drums for military purposes, Mr. Norris then turns his attention towards the rise of the military drum amongst western societies.

In this section of the book, the English Civil War looms large as an important example of how drums increasingly became a part of military culture. They, for example, were critical to signaling orders and provided organizational structure during marches. An added benefit was their ability to increase morale.

Drummers in the mid-16th century through the early 19th century gained in importance and eventually became distinct elements, or drum corps, within European armies. Drummers, primarily ranked as corporals or sergeants, were also tasked with unique and specific tasks in addition to their playing.

For example, they were key participants in important events such as parleys between belligerents in addition to their duty of signaling the commander's intent (through specific drum patterns that meant to attack, retreat, and others). Thus, their close proximity to leadership often increased their status amongst soldiers.

On the other hand, drummers were also targeted directly due to their capacity for signaling orders. Additionally and paradoxically, drummers served as stretcher-bearers for wounded soldiers, but in the British Army of the 16th and 17th centuries, they also administered discipline to soldiers through floggings overseen by Drum Majors. For drummers, it is unlikely that such onerous responsibility endeared them to their fellow soldiers.

Notably, Mr. Norris makes use of records available from regimental museums and highlights the careers of numerous drummers, particularly those serving in the British Army. As his narrative proceeds, he also cites multiple examples of American drummers who served in the Civil War.
These interesting cases and others are treated anecdotally, and drummers recounted in the book were often colorful characters, even if not well-known.

For example, one humorous incident involving drummers in the British Army includes an encounter involving Queen Victoria. As Mr. Norris relates, “Queen Victoria was quite fond of military music and on one occasion during a performance at Windsor Castle she inquired of the title of the piece of music being played. The messenger returned with the information that it was called ‘Come Where the Booze is Cheap.’” One might easily imagine drummers at the time quite enjoying playing this specific tune in such a context.

As Mr. Norris' narrative progresses, he turns his attention to the Crimean War and introduction of the railroad as key events and developments that altered the use of the drum as a tool for signaling in particular. Prior to this, and as muskets and then rifles were increasingly used in warfare, the drums gained a more symbolic role as they lost their tactical utility for communicating due to the noise of the battlefield. At this point in the book, the largely ceremonial role of the drum's use comes into focus.

Throughout Marching to the Drums, Mr. Norris writes clearly and with general audiences in mind. One downside, however, is that it contains no end notes or footnotes which would have strengthened the material, particularly for academic readers who tend to rely on citations of source material for the text's credibility.

For drummers, more attention to the development of drum rudiments, critical elements of drum corps playing would have been intriguing. Those issues aside, the book does not argue a specific point of view and is refreshingly free from academic pretense. More importantly, it successfully retains its focus on the history of drums in the military.

Marching to the Drums is enjoyable reading for both the general reader as well as for serious historians—particularly those who rarely stray from their bookstore's nonfiction aisle but still need a break from scholarship during the summer months.

For more obvious reasons, the book is also ideal for music curricula, their participants, and certainly drummers. Altogether, it is a welcome and interesting work that adds depth and perspective to not only the history of the drum, but military history as well.