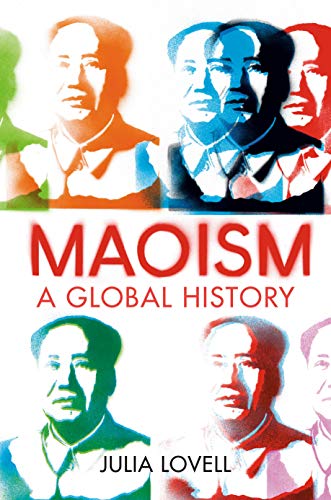 “The West needs to overcome its amnesia with respect to Maoism’s global ambitions. Lovell’s study of Maoism as a global history could not be more timely.”

After Mao Zedong’s Communists defeated the Nationalists in the Chinese Civil War in October 1949, the Sino-Soviet bloc threatened to dominate the Eurasian continent. Mao’s advocacy of global revolution was if anything more strident than Stalin’s. The U.S. policy of containment sought to prevent Soviet expansion in Europe and the Middle East and Chinese expansion in Asia and the Pacific.

During the last two decades of the Cold War, however, Communist China and the United States became de facto allies against the Soviet Union. Geopolitics trumped ideology. This did not mean that Mao’s China gave up its global ambitions. The Sino-American entente was a marriage of convenience—the enemy of my enemy is my friend.

As Julia Lovell points out in her important and timely study of Maoism as a global phenomenon, Communist China under Mao sought to export its revolution abroad first as an ally of the Soviet Union and later as a more radical alternative to Soviet communism.

Maoism as an ideology spread to the Korean peninsula, Southeast Asia, Indonesia, Africa, Western Europe, Latin America, and the United States. It fueled political instability and promoted extreme violence, including the genocide of the Cambodian revolution and two decades of mass terror in Peru.

Lovell, who is Professor of Modern China at Birbeck College, University of London, defines Maoism as “the wide range of theory and practice attributed to Mao and his influence over the past eighty years.” It involves, she writes, “a spectrum of political behavior: ranging from anarchic mass democracy to Machiavellian brutality against political enemies.”

Maoism’s component parts include armed violence, ceaseless class struggle and revolution, internal Party purges, anti-Western colonialism, and totalitarian Party control. Within China Maoism manifested itself in the purges of the Rectification campaign of 1942, the disastrous Great Leap Forward in the late 1950s and early 1960s that resulted in an estimated 30 million deaths in China, and the horrific Cultural Revolution of 1966–1976.

Lovell notes that Mao used the International Liaison Department (ILD) and military intelligence to export the Chinese revolution. This was in essence China’s version of the Comintern. China helped forge and supported communist movements throughout Southeast Asia and promoted Maoism to radical groups in Africa, Western Europe, Latin America, and the United States.

The author traces Maoism’s global appeal to Edgar Snow’s book Red Star Over China that in the mid-1930s portrayed “Mao and his comrades as idealistic patriots and egalitarian democrats.” Snow wrote that Mao’s goal was “to awaken [China’s millions] to a belief in human rights, to combat the timidity, passiveness, and static faiths of Taoism and Confucianism, to educate, to persuade . . . them . . . to fight for a life of justice, equality, freedom, and human dignity.”

Snow, Lovell notes, humanized Mao and his revolution, and resulted in “favourable international perceptions of wartime Communism, and of Mao more generally, over the coming decades.” “From Burma, to Malaya, to India, to Russia, to South Africa,” Lovell writes, “insurgents, nationalists and revolutionaries drew lessons from Snow on partisan warfare and patriotism.”

Snow was what the late Paul Hollander called a “political pilgrim,” a Western intellectual alienated by the imperfections of his own country who found utopia in the promise of communism.

In the United States, President Roosevelt consulted with Snow, and some State Department officials accepted Snow’s glowing portraits of Mao and the Chinese communists. Though Lovell doesn’t discuss it, Snow’s book and other glowing articles about Mao and his comrades by American journalists in the 1930s and 1940s helped undermine American efforts to support the Nationalists during the Chinese Civil War. This phenomenon would recur in connection with Vietnam War decades later.

Lovell notes that Snow remains acclaimed by Western observers as “the ‘masterful’ author of ‘probably the greatest book of reporting by an American foreign correspondent in [the twentieth] century.’” Lovell concludes, however, that “[g]iven what we now know about the Chinese revolution, Snow and his book should perhaps have been treated more skeptically across the decades.” Perhaps? Mao Zedong and his Communist Party are history’s greatest mass murderers. There is nothing “masterful” or “great” about Snow’s paean to Mao and Chinese communism.

The bulk of Lovell’s book focuses on how China exported Maoism to other parts of the world: Indonesia in the 1960s, resulting in the government and military crackdown that claimed between 500,000 and a million lives; Tanzania, Zimbabwe, and other African countries where left-wing movements received Chinese support, engaged in armed struggle, gained power, and translated Maoism into destructive rural collectivization programs and labor camps; Vietnam and Cambodia, where Maoist policies resulted in purges, gulags, boat people, and genocide; Western Europe, where Maoism inspired terrorist groups such as the Red Brigades in Italy and the Red Army Faction in Germany; Peru, where Shining Path guerillas waged a two-decade-long campaign of terror; India and Nepal.

Maoism’s influence in the United States was tied to the domestic upheavals of the 1960s. Radical groups such as the Black Panthers and Weather Underground imbibed Maoism to promote youthful rebellion, attack American “imperialism” and undermine U.S. efforts to contain communism in Southeast Asia and elsewhere.

Lovell shows that although Maoism originally focused on mobilizing poor agrarians, its appeal in the West was largely confined to upper- and middle-class intellectuals: students, professors, writers, actors. “Many European and American Maoists were educated, even privileged individuals,” she writes, “a long way from the lumpenproletarians that Mao’s rural revolution began to target in the late 1920s.” Western liberal elites, she notes, “showed little inclination to subject China to the same excoriating criticism applied to their own societies.”

Less convincingly, Lovell claims that Maoism deserves some credit for eroding the social and cultural conservatism that resisted the movements for civil rights, gay rights, and women’s rights in the West. Even her admittedly loose definition of Maoism is stretched too far for that claim.

Maoism did not die with Mao. The legitimacy of the Chinese Communist Party is tied to Mao and his legacies. Chinese President Xi Jinping has amassed more political power than any Chinese official since Mao. “Xi,” Lovell writes, “is steeped in the Maoist heritage: in its symbolism and iconography; in its secretive, opaque party structure dependent on control of the military; in its aversion to political heterogeneity; and in its ambition to establish China as a global leader.”

The West needs to overcome its amnesia with respect to Maoism’s global ambitions. Lovell’s study of Maoism as a global history could not be more timely.