Manufacturing Hysteria: A History of Scapegoating, Surveillance, and Secrecy in Modern America 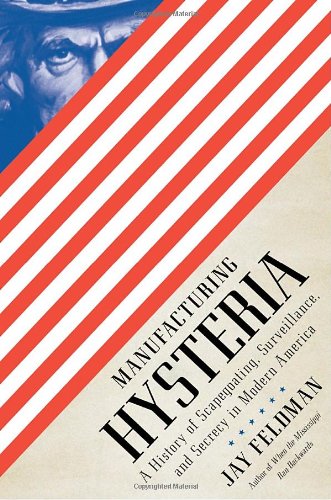 “The Palmer Raids are being cited in more and more books and articles as we turn our attention to immigration policy, and forced deportation. This work is a readable and interesting history of an important period that explains, in part, how we got to this sad juncture.”

Most Americans are completely unaware of an ugly but important chapter in American history. During and after WWI, the United States deported thousands of pacifists, unionists, and other critics of the government. The deportations morphed into a general movement against Mexican immigrants in the 1930s, which eventually led to “Operation Wetback” in the 1950s (500,000 Mexicans were deported from Texas, including many citizens), and to the masses of “voluntary removals” of Operation Streamline today.

Jay Feldman’s new work, Manufacturing Hysteria: A History of Scapegoating, Surveillance, and Secrecy in Modern America focuses primarily on the period during and just after WWI, especially on an unconstitutional policy called the Palmer Raids, which was the forefather of the internment of Japanese Americans during WWII, the McCarthy Hearings witch hunt, FBI infiltration of the Black Panthers in the 1960s, and the abuses of the Patriot Act today. The book is not the history of scapegoating in America, but it does cover an important period.

Mr. Feldman begins with the declaration of WWI (although others who write on this subject have started with the Alien and Sedition Acts of 1798). There were many Americans who wanted to remain neutral in WWI, especially the very large part of the population that had originally emigrated from Germany. Woodrow Wilson, mobilizing support for US participation in WWI, denounced “certain hyphenates,” by which he meant German Americans.

Nativist anger in the 19th century had been directed against Irish Catholics and Chinese. (It resulted in the first laws restricting immigration, in the 1870s and again in 1922).

Popular crowds called for peace, and were met with violence. New York Mayor John Purroy Mitchel told a crowd that “we are divided into only two classes—Americans and traitors.” Although Wilson had run on a platform of “He Kept Us Out of War,” he quickly moved to quash any opposition to the war effort.

A Selective Service Act required all men between the ages of 21 and 30 to register. U.S. agents detained 30 men at a meeting where Emma Goldman spoke against the draft, and a U.S. marshal said that “we would have been entirely justified in arresting every man who attended this meeting, and they can be thankful that we did not.”

The police then raided the headquarters of Goldman’s anarchist organization without producing a warrant. Goldman and a colleague were sentenced to two years and a fine. The New York Times opined that opposing the draft was antiAmerican, and the Selective Draft act “gives a long and sorely needed means of disciplining a certain insolent foreign element.”

Congress then passed an Espionage Act restricting civil liberties. During the course of the war, not a single spy or saboteur was convicted under this act. It was directed instead against those who opposed the war on philosophical, political, and religious grounds. Any German “natives, citizens, denizens, or subjects” were considered alien enemies. They could not possess firearms, use aircraft or wireless devices, or write criticism of the United States; and they were subject to summary arrest for violating any of these restrictions.

After the war, attention turned to the Industrial Workers of the World (IWW). To the left of the AFL, it proclaimed that while it would support the efforts of mainstream unions for higher wages, in the long run workers of the world had nothing in common with employers, and workers across borders had more in common than the different classes within national borders. They were the only movement to recruit immigrants, and partly in reaction, the Alien Act seemed to assume that radicalism flourished among foreign-born workers and had no appeal to anyone else.

Just before a general strike in Seattle in 1919, immigration officials gathered up forty union activists and loaded them on a train east for deportation. American newspapers cheered the idea that “this is a country of Americans, by Americans, and for Americans.” While native-born Americans were protected by due process, immigrants appeared before an administrative judge, and only a “scintilla” of evidence was required to remove them from the country.

On May 1, 1919, several bombs were mailed to government officials, judges, and leaders of industry. Most were intercepted before they did any damage. One month later, more than a dozen bombs went off in seven cities. Attorney General A. Mitchell Palmer’s home was a target, but the bomber apparently tripped on the front steps, and only the bomber was hurt. (Parts of him were found two blocks from the severely damaged home).

Palmer, a Quaker who had turned down the position of Secretary of War in the Wilson administration, gathered a team to hunt down those behind the bombs. In fact, the Bureau of Investigation had evidence linking the plot to 50 members of a radical group called the Galleanists. But the Bureau left the case open and attributed the plot to a nation-wide conspiracy of pro-labor radicals. It was a cynical manipulation of the threat, writes Jay Feldman, “in order to ignite public fears.”

The Palmer Raids, in which J. Edgar Hoover made his name, resulted in thousands of arrests. Hundreds were forcibly deported, and many more would have been sent packing were it not for a few government officials who deplored the unconstitutional nature of the proceedings. In his autobiography, the New York commissioner of immigration and administrator of Ellis Island explained that,

“Most of the aliens had been picked up in raids on labor headquarters; they had been given a drumhead trial by an inspector with no chance for defense; they were held incommunicado and often were not permitted to see either friends or attorneys . . .

“I was advised by the Commissioner-General to mind my own business and carry out orders, no matter what they might be. Yet such obvious injustice was being done that I could not sit quiet.”

This interesting history transitions to the internment of Japanese Americans, the McCarthy hearings, and then spying by the FBI on US citizens in the 1960s. An epilogue makes the fairly obvious connection to what is happening under the Patriot Act.

Writes the author, “the recent excesses of the George W. Bush administration in attempting to put a stranglehold on civil liberties after 9/11 were not an anomaly. . . . It has been happening in one form or another for nearly a century.” The Palmer Raids are being cited in more and more books and articles as we turn our attention to immigration policy, and forced deportation. This work is a readable and interesting history of an important period that explains, in part, how we got to this sad juncture.