Manipulating the Masses: Woodrow Wilson and the Birth of American Propaganda 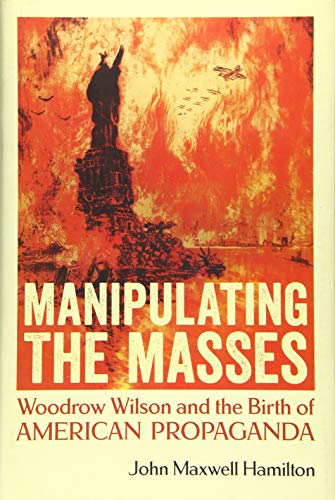 “Both fascinating and troubling, this thoughtful history reveals the roots of the official spin that dominates much of today’s news.”

The blunt title and alarming cover illustration—a 1918 war-bond poster depicting a direct German attack on New York City—make clear the heavy-duty nature of Manipulating the Masses, John Maxwell Hamilton’s important history of the establishment during World War I of systematic propaganda as an instrument of American government. In our present era awash in propaganda, it is a great irony that this book has been largely overlooked in mainstream review media.

The focus here is on the barrage of pro-war propaganda launched by the Woodrow Wilson administration through the Committee on Public Information (CPI), an agency created quickly by executive order and without Congressional authorization on April 14, 1918, one week after America’s entry into the war. Without precedent in U.S. history, the CPI reflected the period’s great progressive faith that government-generated information would “enrich public opinion and take democracy to new levels,” writes Hamilton.

Of course, the CPI’s efforts did neither.

Staffed by brilliant muckrakers who believed fervently in the “purifying” light of publicity, the CPI wanted the public to “cheer, not think” about war against the “Huns.” Under the leadership of George Creel, 39, an energetic and volatile journalist who often spoke through clenched teeth, and who called himself “an agitator by trade,” the agency unleashed a torrent of handouts, films, publications, speaking programs, and events, both at home and abroad, to arouse sentiment in favor of the war.

At the time, there was great antiwar sentiment in the U.S. Nearly one in five Americans—20 million people—were of German descent.

Earlier books have told aspects of this story, but Hamilton’s superb account is exhaustive and stresses how the war-time public relations effort set a pattern for government management of American public opinion ever since. A former journalist and government official, the author teaches journalism at Louisiana State University and is a global fellow of the Woodrow Wilson International Center for Scholars. He draws on more than 150 archives here and in Europe to detail the history and significance of the CPI.

The erudite Walter Lippmann vied for the top CPI job, but it was the “impulsive and mercurial” Creel who wound up heading the 400 staffers who worked out of offices in Washington, D.C., and New York, as well as outposts overseas. By the time the CPI was dismantled at war’s end, “creeling” had become a synonym for “fake news,” writes Hamilton. Government press handouts were “institutionalized,” making journalists dependent on them to this day.

The CPI operated through front organizations abroad, sometimes conducting experiments in field propaganda. At home, Creel, who was close to the president, often “intimidated” editors and reporters, and constantly made news himself. “Journalists considered him ‘the most picturesque figure in the public life of Washington,’” writes the author. “By the time the war was over, Creel was shorthand for everything wrong with government-press relations.”

One notable CPI program brought volunteer speakers into movie theaters across the country during intermissions. The so-called Four Minute Men, consisting of local lawyers, doctors, bankers, and other community leaders, were given sample talks that “advanced Washington’s agenda,” on topics ranging from the military draft law and the first Liberty Loan to “Unmasking German Propaganda” and “Food Conservation.”

More than 74,000 Four Minute Men delivered 755,000 speeches to audiences totaling more than 300 million people “of all classes, all degrees of intelligence, black and white, young and old, rich and poor.”

A third of the 36 different Four Minute Men campaigns “had no tangible purpose other than arousing sentiment in favor of the war,” writes Hamilton. Fear needed to “be bred in the civilian populations,” speakers were told. “It is difficult to unite a people by talking only on the highest ethical plane.”

As if to ensure that the CPI’s tactics were mainstreamed into American public opinion making, two of its bright young practitioners were Edward Bernays, 24, and Carl Byoir, 28, founders of American spin. Bernays, a nephew of Sigmund Freud, would later be dubbed “the father of public relations.” His notable campaigns included a 1929 effort to promote female smoking by branding cigarettes as feminist “Torches of Freedom.” Byoir established one of the world’s largest public relations firms in 1930 (later acquired by Hill & Knowlton) and helped the A&P grocery company, then the world’s largest retailer, fight the movement against chain stores.

“All modern government propaganda has antecedents in the CPI,” observes Hamilton. We remain “only vaguely aware of the Information State that emerged out of the Committee on Public Information’s experiment at mass mobilization of opinion or of the threat that it poses to democracy.” He notes that by 2018, a century after the end of the Great War, “the president of the United States propagandized daily from his Twitter account.”

Both fascinating and troubling, this thoughtful history reveals the roots of the official spin that dominates much of today’s news.