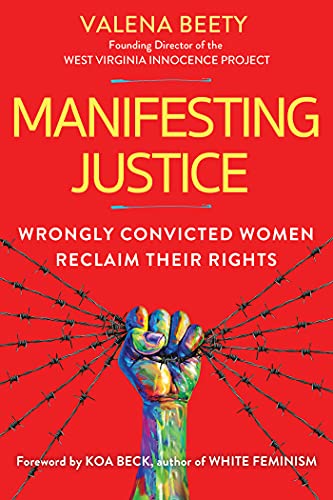 “Manifesting Justice will repay the very determined reader, and there are many shocking moments where the law is revealed to be, to an almost unbelievable extent, an ass.”

Until very recently the authority of the medical and legal “establishments” was considered absolute and above reproach in most societies. In some cases, the economy has also enjoyed that special status, but along with the medical system has already taken a serious beating, especially at the hands of gender and women’s rights activists under a variety of rubrics.

Now it is the turn of the legal system to face calls for fundamental revision and reorientation. In Manifesting Justice: Wrongly Convicted Women Claim their Rights, innocence litigator, activist, and founder of the West Virginia Innocence Project, Valena Beety presents a case of wrongful conviction with which she was directly involved, in order to demonstrate to the need for criminal justice reform, not only to address the manifest flaws in the judicial process itself, but also to rid the system of gender, racial, ability and other forms of prejudice. In this sense the subtitle of Beety’s book underestimates its scope, as her findings and recommendations apply to all people wrongly convicted

The illustrative case around which Beety builds her book involves three women—Leigh, Kim, and Tami—who all underwent treatment at the Pines & Cady Hill Recovery Center for alcoholism and drug abuse in Columbus, Mississippi. Leigh and Tami are lesbian; Kim had a severely ill boyfriend from whom she had stolen painkillers. On leaving the Center after treatment the three women drove to rejoin their respective families and friends; while Leigh soberly drove the car, Kim and Tami drank alcohol and “popped the Oxycontin pills and soon passed out. They had driven less than twenty miles.” Whilst Tami recovered, Kim fell into a coma and suffered respiratory arrest and was taken to another medical center.

On examining Kim, staff of that center discovered evidence of severe physical and sexual abuse on Kim’s body. Tami and Leigh were subsequently charged with aggravated assault on Kim, as well as with conspiracy to possess morphine, and with grand larceny.

In their subsequent trial, Beety identifies a number of general and specific features of the system that weighted the case against the innocent Leigh and Tami, who served ten-year sentences until freed by the work of the Innocence Project.

As Beety demonstrates “It is time to move from a system replete with manifest injustice— miscarriage of justice—to a system that employs tools for manifesting justice.” She shows a system routinely biased toward conviction, and heavily weighted in prosecution’s favor.

In the specific case of Leigh and Tami the major evidence against them was provided by a Dr. Michael West, a “forensic odontologist” (who later repudiated his own evidence), and was based on discovery of bite-marks on Kim’s genitals and elsewhere. Other experts supported West’s testimony insisting that homosexuals are much more likely to bite people when they attack—a claim completely unsupported. Dr West’s prolonged testimony was accompanied by detailed and graphic presentation of the wounds on Kim’s labia and clitoris.

Beety’s chapters alternate between what appear to be verbatim accounts of the trial, and more analytical chapters exploring specific and often complex aspects of the legal process such as habeas law, Alford pleas (pleading guilty to a crime not committed), restorative justice, and more. While understanding of these processes and their flaws is critical to the overall aim of the book, there is a danger of losing the thread of Leigh and Tami’s case, especially since their personalities and identities, and those of their mothers and Kim’s boyfriend’s mother, are not so strongly established.

Similarly, it would be helpful to have the relatively new field of innocence litigation explained earlier in the publication, along with Beety’s own journey from “carceral feminist” to innocence litigator.

For every reader except the already expert a glossary of legal terms is required upfront, or editors should consider including detailed text boxes in appropriate chapters. These and other clarifications would supplement the current arrangement of giving critical information in background notes.

Who is this book for? Fellow litigators and lawyers? Or gender and other activists who can put its insights into practice?

Manifesting Justice will repay the very determined reader, and there are many shocking moments where the law is revealed to be, to an almost unbelievable extent, an ass. But if the point is to create more educated consumers able to avoid becoming victims of the legal system, this book has quite a way to go.