The Manga Guide to Relativity 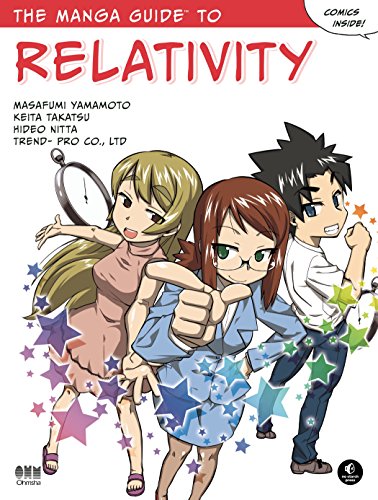 Is there any part of the scientific canon that has taken greater hold of modern popular imagination than relativity? You could make a case for evolution; it certainly gets the most front-page coverage these days, as the front line in a seeming ideological war on science and critical thinking. But as a contemporary source of inspiration for cinema, written science fiction, fact, and technology, it’s relativity by a longshot. Its concepts are transcendent, bordering on the theological: the structure of space and time themselves. (Or, more properly, “itself,” since the fundamental breakthrough underpinning relativity is that space-time is an inseparable multidimensional entity.)

The problem with teaching relativity, though, is that its visceral, otherworldly appeal—If we travel near the speed of light we will age more slowly! We can convert matter into energy!—is rooted in some very counterintuitive concepts and complex mathematics. The result is that popular understanding of relativity is largely reduced to a recollection of some “Twilight Zone” episodes about astronauts who don’t age, and the iconic equation E=mc2, which most people vaguely realize has some kind of connection to the atom bomb. And so we should welcome any creative approach to educating an audience about what relativity really is and how it works.

If you think about it for a moment—and I confess it had never occurred to me before encountering this book—manga is potentially a good pedagogical medium for topics with complex philosophical foundations. Its combined visual and verbal presentation, and its culture of sweeping concepts offer the promise of a multilayered approach that potentially allows the reader to absorb more understanding in more ways than a straight-up, purely equation-driven or discursive textbook. Ohmsha, Ltd., a Japanese publisher exclusively of science and engineering textbooks, is well aware of this: their offerings include an extensive list of Manga Guides to . . .  topics such as electricity, statistics, calculus, databases, molecular biology, and now relativity.

Does the Manga Guide to Relativity succeed? It depends on what you consider its goal to be. It is certainly not intended to be a purely popular guide, since it employs some undergraduate-level mathematics and also dives quickly into a rather unforgiving didactic style. (By page 19 we already have the obligatory saucer-eyed buxom teacher stating, “The Galilean principle of relativity tells us that Newton’s laws are the same in any inertial reference frame that we might choose,“ a sentence likely to send many lay readers running for safety.)

Nor is it altogether successful as a textbook: Unable to squeeze a conventional textbook’s amount of detail into the limited amount of dialogue space available on the (obviously, and necessarily) graphics-heavy pages, the authors have compromised by interspersing the story’s chapters with supplementary traditional, textbook-style, more mathematical interludes.

The math in these interludes is at an early-undergraduate (or perhaps late high-school) level, with a single instance of a basic differential equation. These sections are admirably clear and concise; to the more analytically oriented reader, they may actually be more useful (if less entertaining) than the book’s main manga body.

So if it definitely isn’t a popular guide, and it isn’t quite a textbook—certainly not a primary textbook—then how does it fare as manga? Again, we have to calibrate our expectations. Ohmsha is a science and engineering publisher, far removed from the culture of graphic novels. Though there is certainly a healthy overlap between the demographics of science and engineering students versus graphic novel readers, the publishers are pretty clearly targeting the left-brain segment of their potential market. This is a kind way of saying: Look for accurate science and math in their offerings rather than great manga art or storylines.

In this case, the artwork is rather basic and strictly mediocre, lacking the shading subtlety, occasional rich backgrounds, or fluid depiction of time and motion that characterize good manga art. (And how ironic is that last shortcoming in a book about the relation between space and time!)

The story line is pedestrian, an atom-thin veneer of plot that feels like an afterthought, created as a justification for the graphic novel format.

The protagonist is student body president Ruka Minagi, challenged by the eccentric and capricious headmaster of his school to learn relativity from the aforementioned generously-endowed Miss Uraga in order to spare his classmates the ordeal of attending summer school. The rest of the book consists almost entirely of exposition by Miss Uraga. In the last five pages, in a largely unrelated turn of events, the evil headmaster is overthrown by a talking dog. (Don’t ask.)

It feels churlish to speak unkindly of this well-intentioned and certainly good-natured offering. It does have its charms, with at least a little more humor than one is likely to see in a more conventional offering, and most of its concepts are presented very clearly and concisely. If it falls short as an undergraduate textbook, it would certainly serve well as a supplement. (At minimum, it would be a great novelty prize in some kind of physics class contest!)

But it feels like a missed opportunity. Consider, for example, the single most profound foundational concept of General Relativity (the part of Einstein’s theory that deals with acceleration and gravitational fields, and the part from whence much of our understanding of cosmology and black holes arises). It is this: There is no absolute universal “now.” The fact that time passes at different rates depending on one’s speed and acceleration (including gravitational fields) means that simultaneity is strictly a local phenomenon: Two observers experience the same event at the same time only if they are in the same place. Star Trek’s “subspace radio,” that so conveniently allows the stalwart starship crew to communicate instantaneously with Star Fleet, not only does not exist, it cannot even in principal exist. Relativity proves that “Now” is a shared illusion, an artifact of our existing in close proximity to each other in the same solar system.

What a remarkable concept, almost painful to think about. How much richer would The Manga Guide to Relativity have been had it taken advantage of its medium to explore those deep and colorful aspects of relativity? Now that could be great manga!